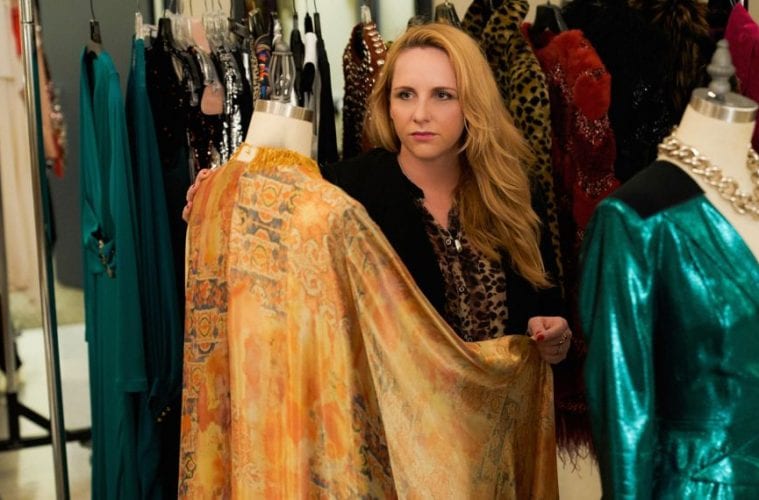 As the reboot of The CW’s soap opera Dynasty filmed its second season in Atlanta one day last summer, costume designer Meredith Markworth-Pollack wrestled with fitting different sizes of prosthetic baby bumps on actor Kelly Rutherford, whose character will be pregnant.

The baby bumps had become an ordeal; they were specially made in London, then lost in customs and had to be remade before finally reaching the fitting room.

But before Markworth-Pollack could decide on the final look, one of her assistants came running in with news from the set. “The parrot’s been pooping on the suit!” she exclaimed, referring to a new character who has a live parrot on his shoulder. “But the pattern’s hiding it — I think we’re going to be okay.”

Sizing baby bumps and camouflaging parrot feces might not immediately jump to mind when considering the work of a professional costume designer, but such granular, often absurd details color the day-to-day reality for Markworth-Pollack and her Dynasty team. Every ruffled sleeve, stiletto, pin and pleat has to be accounted for, not just in terms of style, but in how it fits with the dialogue, the set decoration and props, the actor’s comfort and the scene’s physical demands.

Not to mention the multiple versions of the same outfit that the team has to buy for any number of scripted and unscripted reasons — a strategic rip of a dress up the thigh, champagne sprayed on an enemy, a gunshot to the chest or an actor’s sweat when filming out on location in Atlanta’s sweltering July. Set and filmed here, the show’s second season premieres on Friday.

The flipside of such attention to detail is Markworth-Pollack’s overarching vision for the show’s style, which combines looks from the iconic costuming of the original ’80s series (designed by Nolan Miller) along with contemporary styles unique to each character. All to say, dressing for Dynasty is a whole lot more conceptually and logistically complicated than just going on $20k shopping sprees at Lenox — though that’s part of the job too. 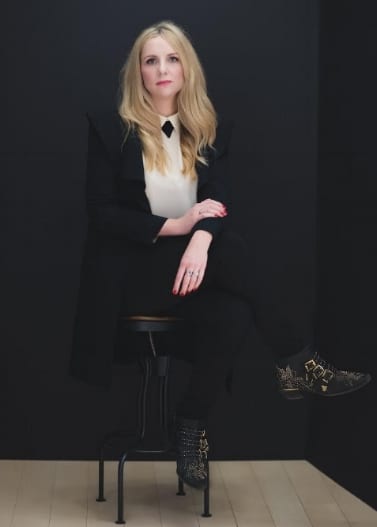 On this day, the show was wrapping up a three-day shoot of a costume party scene, which included 120 extras in addition to the main characters, all of whom had to be dressed and fitted to perfection. There is, in short, a lot of clothes, and for obvious reasons a costume party is especially demanding on a wardrobe department. But the challenges of characters “dressing up” on screen are not atypical for Markworth-Pollack and her team.

Dynasty’s first season featured a fair few montages of characters making themselves over, and in the process, wreaking havoc on lavish closets, flinging about Gucci and Cavalli with abandon. There’s also a moment in nearly every episode when one character praises or, more often, ridicules another’s sartorial choices. In other words, the show is in no small part about what everyone’s wearing, and, hidden behind all those choices, there’s a team of hardworking people.

Markworth-Pollack had a formidable challenge in defining a series style that paid homage to the show’s roots but also gave her characters the chance to make a contemporary statement. She says she was aided by the revival of ’80s looks that are currently in trend.

“One of the biggest things I’ve noticed is the power suit coming back for women,” she says. “It’s strayed from its origins of just showing women’s empowerment in the workplace, and it’s become more of a statement piece as far as fabrics and oversized shoulder pads — it’s become more playful.” She adds that five or 10 years ago, people would have cringed at a one-shoulder look with a ruffle, bow or ribbon. “But now,” she says, “we’re embracing it.”

Beyond watching the original series, Markworth-Pollack found inspiration by keeping up with her favorite designers and celebrities, noting street style and especially men’s suiting around Atlanta (where the show is also set) and getting recommendations from her favorite Atlanta boutiques. Often, however, the actors themselves send her looks they like.

“Yes, of course actors have a say,” she says. “On contemporary shows, especially on a show that’s getting a lot of attention for fashion, the line between the actor and character gets blurred a lot, so personal styles and preferences definitely come out.”

Markworth-Pollack and her team will often buy several options for a scene and let the actor choose the one they’re most comfortable in. Such collaboration is vital because “ultimately,” she says, “if you’re in a scene and the wardrobe is taking you out of the moment, then I’m not doing my job.”

Collaboration is the name of the game in more ways than one, and Markworth-Pollack communicates especially closely with the showrunner — who has creative charge of the series — and writers when they’re establishing a character. Each character not only has their own style (bold prints and gem tones for leading lady, Fallon; a light pallet and fresh fabrics for her foil, Cristal), but their wardrobe also has to reflect their narrative arc over an episode and over the series as a whole.

”I need to know where a character is going so I have room to grow,” says Markworth-Pollack. She gives an example of costuming for Reign, a period piece about Mary Queen of Scots she worked on before Dynasty. “Anyone who knows history knows the ending: she lost her head. So in the beginning, we wanted to keep it as light and fun as possible.” No heads are rolling (yet) on Dynasty, but true to the soap genre, characters’ mental, physical and financial states change at an alarming clip, and the wardrobe has to keep pace.

What’s more, to avoid fiascos like having a blue dress blend into a set’s blue wall, or a striped suit that won’t read well on camera, the costuming team needs to communicate closely with every other department as well. Markworth-Pollack gives another example from Reign: after making an elaborate, pink, 16th-century-style dress, on shoot day she walked onto the set of the character’s bedroom for the first time only to find the art department had made the bedspread and pillows out of the exact same fabric. 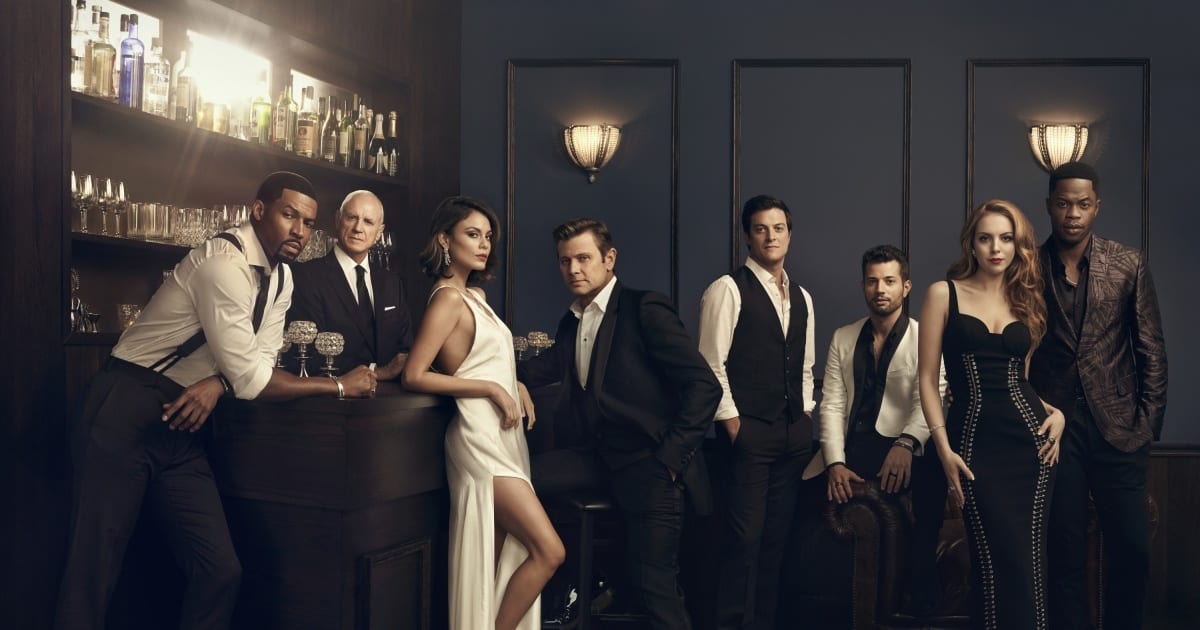 The Dynasty series reboot is set and filmed in Atlanta.

“We were all dying laughing,” she says. “It turned out to be okay in that instance, but that’s why we have several meetings fine-combing the script, where everyone goes through every little thing that pertains to them.”

If this sounds like a ton of work, keep in mind this is all before the clothes actually get on screen and, for that to happen, the costuming team subjects every piece, except for Versace dresses and Armani suits, to an intricate process not unlike an industrial quality-control inspection line.

A piece is accessorized (cufflinks, diamonds, pocket squares); cleaned and examined (collars steamed, alteration pins removed, suit-pocket stitches cut); paired with the right undergarments and tricks of the trade (spanx, insoles, stickies for unspeakable spots); and placed in the actor’s room where they will, at long last, put it on. Once the actor is in a shot that might make the final cut, the set costumers spring into action to take photos and notes on the precise state of every piece (“distressed t-shirt neckline,” “slightly sagging breast pocket,” “smudge on left boot”). This notation will go into a huge continuity book or, as the costume team describes it, “the bible,” which allows the team to recreate the exact same look across disordered shoot schedules.

With around eight main characters who have five or six costume changes per episode, and 22 episodes in a season, each of which takes about eight days to shoot, Markworth-Pollack and her team have their work cut out for them. On this day, they arrived on set at 11 a.m. and didn’t leave until just before midnight — a schedule sure to run anyone ragged. The clothes, however, remain as impeccable and opulent as ever.