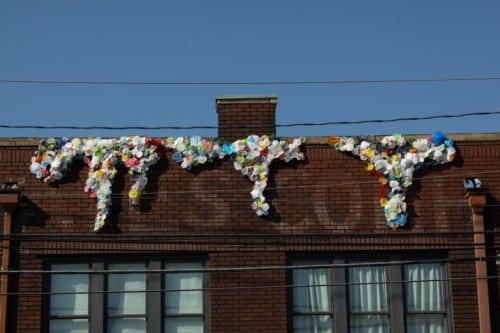 I’m driving down Edgewood Avenue, about to cross Boulevard, when . . . whoa, something catches my eye. What is that multicolored stuff oozing over the roof and down the facade of an old brick building?

It’s the first phase of “Ocean,” an installation by Caroline Lathan-Stiefel. It will continue to grow as the former Atlanta artist sends new sections from Pennsylvania every couple of months, and it should be completed next summer.

The beginning of Caroline Lathan-Stiefel’s “Ocean.” (Photo by Mike Jensen)

Lathan-Stiefel took her inspiration from “Solaris,” a 1961 science fiction classic by Polish writer Stanislaw Lem. She was particularly captivated by his description of a “sentient ocean” that covered the planet Solaris, which made “endless series of synchronous, circular waves flow in from all around, like shrinking mouths, like living muscled closing craters.”

Lathan-Stiefel’s artistic vocabulary — webs of pipe cleaners, cloth or plastic and pins — provides the perfect vehicle for translating that image into physical form. “Ocean” consists of myriads of interlinked circular pieces consisting of plastic shopping bags stretched over and sewn onto pipe cleaners.

Making the pieces is quite labor-intensive, but not nearly the challenge of devising a way to make the lightweight pieces stay put. Lathan-Stiefel couldn’t put nails into the facade, because the handmade bricks would crumble, and she was afraid to use flyweights, lest one fall off and smack a passer-by. She opted to stuff the circles with more plastic bags to make them heavier.

Though the piece seems frail, weather resistance is not an issue. As we’ve come to know, and rue from an environmental standpoint, plastic is virtually indestructible. Awareness of the rafts of plastic debris that float in our oceans, choke waterways and kill marine life adds a veil of menace over what would otherwise be a playful fantasy. If our oceans are sentient, as Lem wrote, they are probably feeling pretty frightened.