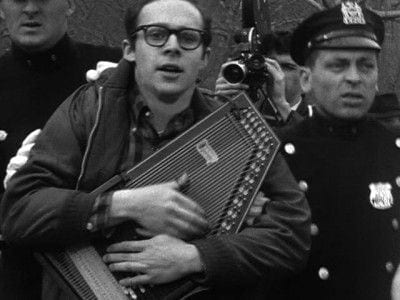 “Peaceably to Assemble: Protest in Film and Video, 1961-2006” is (unfortunately) timely, given the current post-election chaos in Iran. A Film Love event curated by Andy Ditzler, the screening at the Museum of Design Atlanta (8 p.m. Friday, $10) comprises seven short films — some raw, some structured — that give a personal point-of-view into moments of public defiance.

The three films that were available for preview include the earliest of them, “Sunday.” A response to a statute banning live music in Manhattan’s Washington Square Park, the 20-minute, black-and-white entry is, if nothing else, a fascinating look at a major transition in male fashion. As folksingers converge on the park — inevitably raising their voices in a Woody Guthrie anthem — you notice that the only guys wearing hats are the cops, or older fellas who represent everything the 1960s youth movement would brand The Enemy.

When a geekish young man — wearing spectacles and clutching (wait for it!) a dulcimer to his chest –– is hustled away by the cops, the movie tilts, in hindsight, toward comedy. Some of the footage seems knowingly editorial — a chance to show the police (who probably weren’t too thrilled themselves about enforcing this ordinance) as goons, compared to those willowy folksters. But when the footage includes an articulate African-American man questioning a policeman about the situation, “Sunday” reminds you of how differently a black person in the South would have been viewed at that time, of the volatile civil rights struggles that were then boiling down here.

“Jan 69,” a seven-minute coverage of the Prague funeral of student Jan Palach — who set himself on fire to protest the Soviet invasion of Czechoslovakia — is a pretty straightforward piece of journeyman witnessing: footage of the mourners and the ceremony, set to a classical choral piece.

The third piece available for preview, the half-hour “The Ashes Action,” could be an eye opener for any younger gay person who has no idea of the decade-plus of terror and loss occasioned by the onset of HIV and AIDS. It centers on a 1992 action, during the first president Bush’s bid for re-election, when members of ACT-UP tossed the ashes of their dead loved ones on the White House lawn. In retrospect, it may look silly. These young people — most of them punkish, pierced fellows from New York — seem ridiculously earnest … until you remember that the stakes, and their experiences in this supposed first blush of their lives, were life-and-death.

Friday night’s program will also include footage from a 1990 ACT-UP Atlanta action that was staged at the CDC. It wasn’t available for viewing in advance. I wish I could have seen it, since I helped post bond for some of those ACT-UP’ers. (My then-partner was very big in the group.) Around that time, I was called into my editor’s office at the big paper where I worked. A very refined fellow (bow-tie, middle-aged, married, with kids), he warned me to be careful about involving myself with such political actions, even at the fringes and on my own time. A couple years later, he divorced his wife, came out, worked his contacts to snare a book deal, and promoted himself as a Seasoned Voice of the Gay Movement. He’d never marched a day in his life. He’s still around. A lot of the people in these raw, impassioned, sometimes silly documentaries are long dead.

Take that for what it’s worth. For me, these short films offer a glimpse of people willing to take risks, and maybe look silly in the process, to try improve their world, and not just their pay bracket.