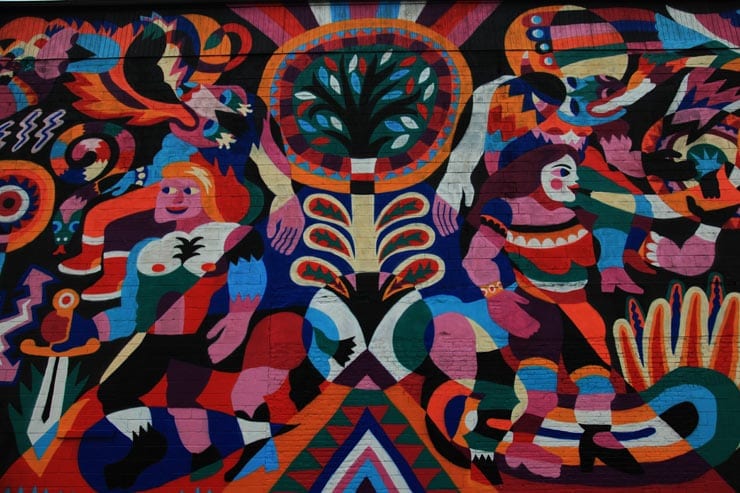 A mural by Neuzz, a Mexican street artist, is one of many sponsored by Living Walls.

Sam Parker, one of Atlanta’s noted street artists, has transformed the once-blighted, graffiti-strewn wall that runs along Cabbagetown’s railroad into an ambitious showcase of large-scale murals. But he has never been to City Hall to fill out official paperwork, and he has yet to read the city’s ordinance on public art.

As the Atlanta City Council proposes to tighten regulations on public art on private property, Parker’s days of painting with nothing more than a permission slip from CSX in his back pocket, relying on the goodwill of neighbors to keep complaints at bay, may be over. “If we have to go through a whole new layer of official channels, it’s not going to happen,” he said of his work with the Cabbagetown Wallkeepers. The group evolved through the local neighborhood improvement association, with CSX, the transportation company that owns the wall, donating money for materials to clean up graffiti and produce more ambitious works.

“The neighborhood has already told us ‘We trust you,’” he said. “We don’t need more bureaucracy.” The updated legislation, drawn up after a series of public controversies over city-sanctioned murals, would require an official permit for public art on private property. This was always the case, if rarely enforced, but the new legislation is more far-reaching. After submitting documents and obtaining permits from multiple city departments, artists would be required to present their ideas to their Neighborhood Planning Unit (NPU) before obtaining approval from the city council.

Legislators insist their new ordinance will streamline the existing process and give the public more input. The law claims to establish “reasonable regulations” that will balance artistic expression with other values, such as “creating an aesthetically pleasing environment” and “respecting the shared values of specific neighborhoods.”

Campaigners for the arts, however, fear the proposed law would allow officials to pass judgment on artistic content and introduce more bureaucratic channels that would stretch the approval process by more than 30 days.

“It feels like we’ve taken five steps forward, only to take three steps back,” said Monica Campana, cofounder and executive director of Living Walls, a nonprofit group that has produced over a hundred murals across Atlanta since 2009.

Street art has never enjoyed an easy relationship with officialdom. But the relationship is evolving as a growing number of muralists work with property owners and developers on commissioned projects. In the last five years, Atlanta’s mural scene has flourished as blank walls became canvases for local and international street artists. Even city officials have gotten into the business of commissioning street art, with the Office of Cultural Affairs’ Elevate program aiming to revitalize abandoned stretches of downtown.

Yet many of the artists zapping up dull offices, corner stores and MARTA underpasses are working illegally. Of the hundreds of murals that have gone up across Atlanta’s neighborhoods, only 51 have been certified by the city’s Office of Cultural Affairs since 2006. Over the last few months, the office has begun to compile a long inventory of works it hopes to grandfather in before any new law is introduced. “We’re just trying to cross our T’s and dot our I’s,” said Camille Love, executive director of the mayor’s Office of Cultural Affairs, who will hold an information session on the city’s proposed ordinance on public art on April 9 at the Atlanta Contemporary Art Center. “Every system has a structure. If the momentum of this movement is that they think they can just come in and do whatever they want in our shared public space, well, that’s not okay.”

Across the country, officials have adopted a range of policies as street artists team up with property owners to work on commissions. R. J. Rushmore, editor of Vandalog, a national blog that chronicles street art, said the default model, adopted in cities such as New York and Philadelphia, is that the artist must have property owners’ permission. Other cities, such as Los Angeles, have developed more stringent rules.

Atlanta’s present ordinance, like LA’s, requires artists to submit a permit application — which includes an artist’s statement, a detailed graphic of the proposed work, as well as a copy of the artist’s resume and a statement signed by the property owner — to three city departments. The Office of Cultural Affairs, the Office of Transportation and the Urban Design Commission certify that the art meets the goals of the city’s public art program, will not distract motorists and does not contain commercial speech.

The new ordinance would make the Office of Cultural Affairs a one-stop-shop responsible for presenting the project to other city departments and placing the application on the agenda of the relevant NPU. Love claims her office would “remove the subjectivity a council member might bring to the table,” but a council member would still have to submit a personal paper in support of the work before the council voted on whether to approve the application.

It is not clear what criteria it would use. A line in the existing law — “The council shall in no way restrict the content or message of the proposed work” — does not appear in the new one.

While officials say they aim to clarify, critics claim the new law only make it more confusing. Its language is so broad, legal experts say, property owners would require a permit to display any art that could be seen by the public. The ordinance defines public art as an “expression of creative skill or imagination in a visual form” intended to “beautify or provide aesthetic influences” on private property that is “visible from a sidewalk, street or public right of way.”

“It could cover the garden gnome in your front yard,” said constitutional attorney, Gerry Weber, who successfully challenged Atlanta’s 2003 anti-graffiti ordinance that made it a crime for property owners to paint murals on their buildings without city approval.

Love dismissed First Amendment concerns as a stretch, saying the city’s intent is not to restrict artistic expression. “We’re not in the censorship business,” she said. “If someone puts a sculpture in their yard and a neighbor complains, hopefully that will be something they can address over the fence.” Argentinian artist Hyuro caused a flap with this mural.

Joyce Sheperd, the city council member who sponsored the legislation, said she had no plans to monitor people’s yards, but still she insisted that some art was out of bounds. “Would you want a picture of a naked woman on your street?” she asked. “The city has a right to regulate. If you decide to put an eight-foot picture of a naked woman in your yard, the city is not going to allow that.”

Actually, art depicting nudity is constitutionally protected, unless it meets the test for obscenity, Weber said. An artwork would be judged obscene only if the average person finds it appeals to prurient interest, depicts sexual conduct in a patently offensive way and lacks serious artistic value.

“Officials miss the point when they say, ‘Trust us, we’re only going to target controversial works,’” he said. “Targeting art works based on their content and viewpoint only heightens First Amendment concerns.”

Everyone agrees the new ordinance is an attempt to address disputes over the content of two Living Walls murals in 2012. Some residents in the Chosewood Park neighborhood, south of Grant Park, complained about a stark black and white mural by Argentinian artist Hyuro, calling it pornographic. The piece showed a nude woman, hand-painted in 37 frames, grow fur and shed her coat, which morphed into a wolf. Many argued there should have been more community input, particularly on a wall opposite a church and a mosque.

In the Pittsburgh neighborhood, some residents objected to a mural by French artist Pierre Roti. Council member Sheperd, who lives in the community, said she was motivated to rework the legislation after finding herself caught in the standoff over a surreal 240-foot image of a male torso with a crocodile head emerging from a gothic cityscape. While many loved the piece, some claimed the creature’s serpentine tail was satanic; others questioned what it had to do with their community, a historic but poor African American neighborhood just south of Downtown.

“Residents were coming up to me saying ‘What in the world?’” said Sheperd. “’Councilmember, do you see that mess? What are they trying to say about Pittsburgh?’”

At the same time, Living Walls was showing its certification from the city, saying “We did everything you asked us to do.”

Sheperd admits she found the artwork hard to defend, explaining she comes from a Christian family: “I know what my grandma would say: ‘That ain’t nothing but the devil.’”

The more she looked into the rules governing street art, she realized city legislation was rarely enforced, and even those organizations who were trying to follow the ordinance, like Living Walls, were not required to seek public input.

While Campana admits Living Walls was naive, she insists the problem was not a lack of official regulation. In the case of the Roti mural, her group filled out all the required official documents and went through three city departments; the problem, she believes, was that Living Walls didn’t create enough opportunity for Roti to interact with Pittsburgh residents.

For some, the debate represents the growing pains of Atlanta’s street art movement. A freewheeling approach, with artists flying in for a few days and moving on, can work well, but that shouldn’t replace more back and forth with the public.

“I do think there should be more thought about the people who get to live with the work,” said Chris Appleton, executive director of WonderRoot, the nonprofit gallery in Reynoldstown. “Artists who are creating public works should want to understand and engage the community they’re working in.”

A key question is how to interact with local communities without stumbling down the path of parochialism and making unchallenging works. Like many artists, Sam Parker worries that too much regulation and focus on consensus can lead to bland art that no one wants to see.

Campana believes the council’s legislation, however ill-conceived, presents an opportunity for broader discussion about public art. “There’s no way the city can make sure everyone’s going to like everything we do — that’s impossible,” said Campana, who is working on an old railroad underpass on Boulevard Avenue. She is now spending more time exploring the community, asking residents to pass on anything they would like the artist to look at. “We want to spark a conversation.”

On home page: mural by 3ttman.