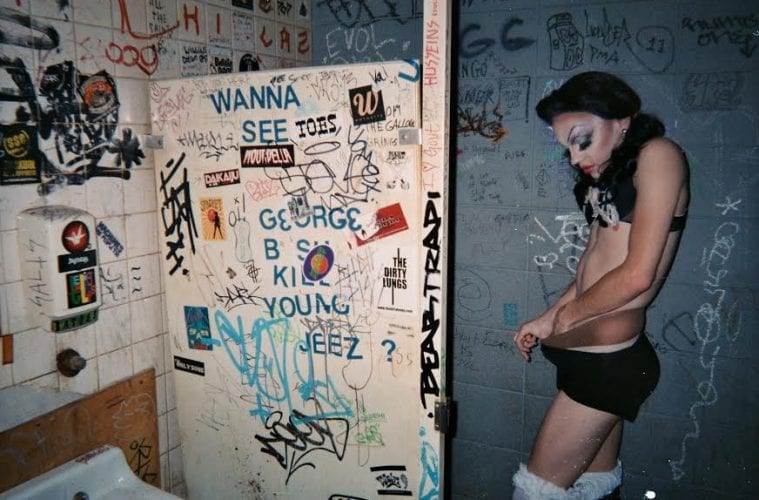 Profile: a conversation with Sunni Johnson of “WUSSY Mag” about queer aesthetics and activism

In the locker room of my parochial school, I would daily steal glances of the lithe, cherry-spritzed bodies around me. “This isn’t me,” I thought, left only to conclude there must be something else. Later, I understood this as a queer moment, or “the open mesh of possibilities . . . when the elements of anyone’s gender, of anyone’s sexuality aren’t made (or can’t be made) to signify monolithically.” As total as the heteronormativity of the locker room seemed, I couldn’t see myself existing within it. Queer art similarly challenges and resists normative expectations. Bodies are presented as boundless; the multiplicity of experiences is embraced. What counts as normative is a moving target, and queer art refuses to play the game.

In 2014, WUSSY Mag launched as an online magazine “for southeastern queers, focusing on art, nightlife and culture.” In new media fashion, they recognize the potential of the Internet as a queer space — demanding more of the Internet’s potential for queer expansion. WUSSY Art Editor Sunni Johnson, whose role includes curating arts and culture content, lends us her insight on queer style, activism and academia, and what it means to be a “true queer” in art. 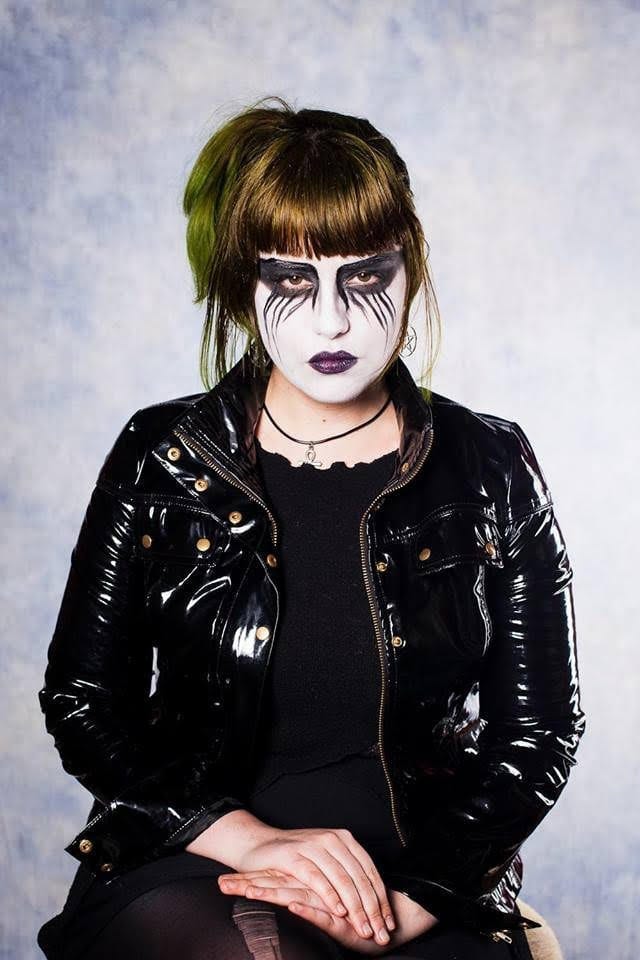 ArtsATL: Can you tell me about your position at WUSSY and how this work relates to your past projects?

Sunni Johnson: I often help promote queer artists’ projects and events. This means I have to represent their work as best I can. My favorite aspect is conducting interviews with different artists: picking people’s minds, hearing about their creative process, what inspires them. My first interview ever was with The Gossip for a zine I made at 16. It was exciting to interview a rad queer like Beth Ditto. I’ve loved interviewing ever since! It feels full circle in many ways to go from interviewing Beth Ditto for my little teen zine to recently interviewing John Waters.

ArtsATL: How does the role of being an arts editor differ from creating the content yourself as the artist? 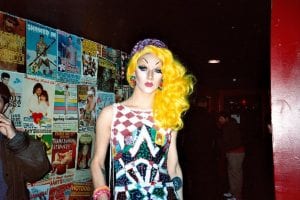 Violet Pop Art, 2014 (Image by and courtesy of Sunni Johnson)

Johnson: In my personal work, I would definitely say I have a very “femme” aesthetic. I rely heavily on advertising, National Geographics and fashion magazines. I juxtapose images to convey themes of confinement, escapism, fantasy, fragility and transcendence. In my photography, I portray personas that are monstrous and powerful. “Femme” aesthetic and subject matter in art is often not taken seriously, which is fine by me. I’m not interested in standard accolades. I just want to express myself and my love for the femmes and pansies in my community.

Being an editor of any kind brings more responsibility. My artistic path has been DIY and music-oriented. As editor of various visual-arts formats, I’m now paying attention to genres, aesthetic and narratives not familiar to my own.

Moreover, I get a lot of joy from collaborating with others. Dialogue emerges from venturing through the wormholes of options. New avenues are created. When you put many different visionaries in one group, it’s messy. You learn a lot about compromise and communication within group settings. Lots of patience and understanding helps as well, especially in terms of something like WUSSY where each team member has different identities.

ArtsATL: I’ve heard the “new queer aesthetic” defined as one that includes race, class, gender and sexuality. Do you agree with this definition, and how does the mission of WUSSY fit into this?

Johnson: That’s funny because I always loved the ridiculous B-movie work of Gregg Araki and his part in “New Queer Cinema.” The first film in the Teen Apocalypse Trilogy was a [about a] varied group of gay and lesbian youth of different backgrounds. Araki always explored polyamory as a subject as well; the only thing missing was the trans narrative — though the “aesthetic” of gender-queer was always present in his work. Araki is definitely an example of popular art that was calling itself “new queer” over 20 years ago. The queer community has always had variety in regards to race, class, gender, sexuality. To say it hasn’t is erasure. However, I agree that the dialogue has evolved tremendously.

There’s something about prose, especially the ways words are arranged and the sounds they make together, that hold what I consider a “queer” style. You can put garbage words together in a way where they sound like heaven, erotic and enthralling. That becomes literary magic. “Queer” style is anything that works against normativity. My teenhood was littered with Virginia Woolf, James Baldwin, Kafka, Dylan Thomas, Sylvia Plath, Walt Whitman, Herman Hesse. Each has their own queer tone to me. You cannot only see it, but you feel it — the lurid and strong writing that is all encompassing and shakes you to the core.

Regarding WUSSY, inclusion is definitely important. I am grateful for Taylor Alxndr and Southern Fried Queer Pride, a very “true queer” organization (my alternative to “new queer”) in their support of POC, non-binary and trans individuals. Our content is submission-based, and that can been limiting. We’ve only featured one interview with a transmasculine individual, an interview I arranged but passed on to my partner (who is transmasculine identified as well). It’s not appropriate for me to navigate certain topics and narratives. As we grow, I hope we receive more submissions from a variety of perspectives and experiences. 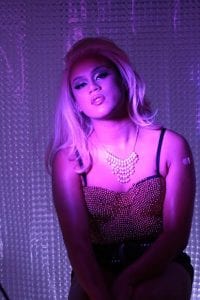 Zaida J, 2013, from Johnson’s Grrrl Germs series as part of the Ladylike group photography exhibit. The series presented gender-fluid experiences of girlhood via portrait photography. (Image by and courtesy of Sunni Johnson)

ArtsATL: How do you feel about academic, theory-minded investigations into queer aesthetics?

Johnson: I find academia frustrating in this country due to the realities of class, privilege and student debt. I’ve long felt the divide of the academic feminist community from the grassroots, DIY feminist communities. It’s possible to participate in your queer community in radical, creative ways and be an academic, but I don’t find academia in itself radical. Academia is an institution.

Salon sponsored a “Transgender in the Mainstream“ panel at Art Basel. All of the artists spoke about the way gender and sexuality are marginalized by academia and media. Theory-based academia can feel tokenizing. I’ve had to be aware of and check myself on this, too, as media is a thousand times worse. Anything relying on descriptors and categorization can be damaging for identity and experience.

ArtsATL: Similarly, what do you feel the relationship is between queer art and activism/community organizing?

Johnson: Sometimes the activism is almost accidental. The visibility politics of DIY scenes is a good example. People falling “outside the norm” congregate naturally through their shared identities, experiences and interests. They navigate conflict and struggle in powerful, everyday contexts. When I first got into zine making, I was really moved by the obvious connection between art and activism in the zine scene. I owe a lot to the stories and info I discovered in xeroxed DIY riot grrrl zines. Touching on this, I really want to create a queer zine showcase. I know the Internet has been a highly used space for queer communities, but there is something super satisfying about a physical piece of art made on the cheap, full of heart and thought, that an angry rant on Facebook just doesn’t fulfill for me.

ArtsATL: Are there things that you wish were different or improved on in the Atlanta queer community? Do you see it heading in a certain direction or any overall trends?

Johnson: Since the queer community is vast in identities and sexualities, it is fairly divided. Add issues of intersectionality, and it further divides. Racism and male privilege create as many problems in the queer community [as they do in] hetero visual and performative communities. It’s problematic to assume that if you are queer you cannot be an oppressor.

Sometimes I see people sideswiped — said by some to not be queer or trans enough. Like any oppressed sector, no one is immune to in-fighting. I don’t like to cis-assume, first and foremost, but I think many heteronormative individuals can be queer. It really depends on context.

The queer community could really benefit from supporting one another and holding space. We are all individuals here. Call-out culture has a space in this world, but there is something really powerful about calling in sometimes, too. Assumptions make an ass of me and you. Also, if you throw shade, you’re never going to shine. Another goofy saying for the cause! All-in-all the queer community needs more dialogue, to listen and to show support.

ArtsATL: Do you have any current or upcoming projects?

Johnson: I have a collab zine that presents wymyn as mystical monstrosities and goddess-tinged anomalies, called Good Dick is a Conspiracy Theory. WUSSY has a lot in the works. We hope to create print issues and are looking for permanent space as part of the Goat Farm’s Beacons project. We are also hosting an art crawl block party in October in conjunction with Atlanta Celebrates Photography! The idea is to bring it to a larger scale in terms of more artists and in varied queer narratives.