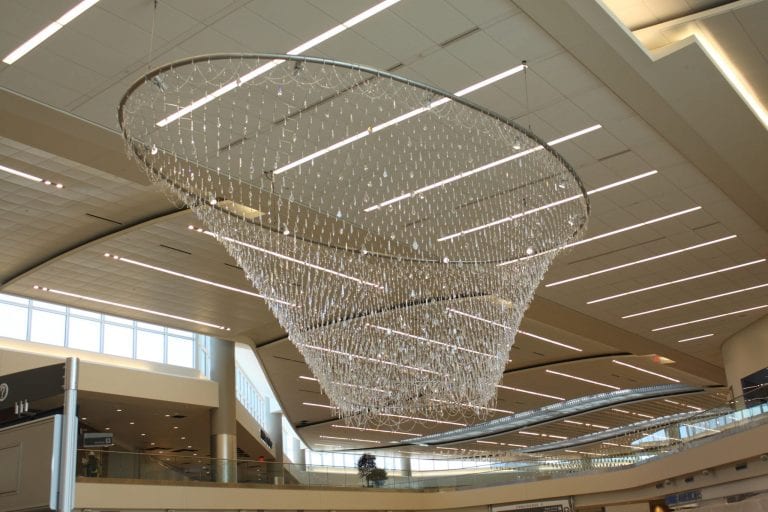 Art as interruption: The necessity of public artwork at Hartsfield-Jackson International

Decades before he became a namesake for Hartsfield-Jackson Atlanta International Airport, Mayor Maynard Jackson recognized that strategically placed public art could serve to counter the stresses of air travel and humanize the vast scale of the facility. But what began as his modest commission of nine pieces for the new terminal in 1979 has evolved into a world-class collection befitting the world’s busiest passenger airport.

Erin Bernhardt, a native Atlantan, says she has been a beneficiary of Mayor Jackson’s vision for as long as she can remember.

“Ever since I was a little kid,” explains Bernhardt, a filmmaker, journalist, and event planner, “I’ve been mesmerized by the art at Hartsfield. Even when my flight is delayed, I don’t get mad because I get to walk through and look at different exhibits and discover new artists. I think it’s one of the coolest things our city has going for it.”

One of the largest site-specific installations at Hartsfield is Radcliffe Bailey’s “Saints,” which is mounted on a curved wall above the escalators on

Concourse E. The mixed media painting explores themes of migration and was commissioned in anticipation of the 1996 Olympic Games. “airFIELD,” developed and fabricated by the digital art platform UEBERSEE, Inc., is suspended in the center of the airport’s new International Terminal. Measuring 90’ long by 30’ wide, the data-driven piece evokes the wonder of flight through thousands of custom-made liquid crystal discs. Donald Lipski’s “RebiLace” (a Liberace anagram) at Transition Hall conjures images of excessive, glorious decadence in decorating through a massive chandelier composed of 10,000 hand-cut and polished Swarovski crystals. As the flight of fancy comes into view (the crystals alone weigh 1,000 pounds) upon ascending the elevator to Concourse F, it creates a sense of arrival that is comparable to entering a grand ballroom.

Two hundred and fifty thousand passengers traverse Hartsfield on a daily basis. Concourse E alone hosts as many visitors in a month as New York City’s Museum of Modern Art receives in a year. And though the monumental pieces are hard to overlook, Katherine Dirga, who manages the Airport Art Program, believes even the smallest work of art on exhibit has the power to inspire big shifts in consciousness.

Dirga’s mission as curator is to engage, excite, relax and soothe traveling warriors who tend to be preoccupied with mental checklists from check-in to boarding. “Anything that causes us to flip out of our narrative for a moment,” she says, “that we have to analyze and evaluate in our brain . . . can take us out of our schedule and offer a little steam release.”

Judging from the stream of positive responses on Twitter (@ATLairport) and handwritten notes penned by happy art-lovers, Dirga is meeting her goals. “Responses like ‘the artwork meant so much to my day,’ or ‘it changed our experience being here,’” she offers, “makes us feel like the collection really does touch and connect with people.”

Arguably, no one has felt a deeper connection than Bernhardt, who did not attempt to curb her enthusiasm when first crossing paths with Dirga last year.

As director of the Art Farm, a 40-acre compound that serves as a gathering place for artists at Serenbe, Bernhardt seized the opportunity to invite Dirga to lead Sunday’s Art Over Dinner event at the sustainable community in the Chattahoochee Hill Country.

Steve Nygren, who co-founded Serenbe, was on board immediately. He sees Hartsfield as not only an incredible window for visitors who don’t know much about Atlanta, but says the art within serves a purpose above and beyond design and aesthetics.

“I believe through art, we talk to our actual souls and we’re able to tap into the unconscious that really makes our souls dance,” states Nygren. “As we move away from that, we lose touch with those things that move us on a non-conscious and non-obvious way.”

Art Over Dinner, a series of intimate gatherings with artists, personalities and the organizations that support their work, is modeled after the Jeffersonian dinner party— which was orchestrated to bring people together to have fruitful dialogue around the dinner table in unique settings.

Bernhardt promises, “a whimsical, romantic, magical dinner under the stars with beautiful floral arrangements, fine wines and a homemade farm-to-table dinner for 40 guests,” in her ongoing effort to help amplify arts and culture and support artists who are doing great work.

As for Dirga’s dinner guests, they can expect a virtual tour of Hartsfield’s 250-piece collection. Annual exhibits like the Youth Art Galleries (featuring works from Georgia students grades K-12) and the Employee Art Show (a juried competition open to employees— from baggage handlers to ticket agents— and their families) will be on the menu. Plans for a major expansion of the Martin Luther King Jr. exhibit, which will have an audio/visual component to make it more interactive, will be discussed. And there will be a focus on Hartsfield’s collection of confiscated goods in collaboration with the U.S. Fish & Wildlife Service.

Dirga will also share insights and observations from quadrants of Hartsfield that are strictly off-limits to non-employees.

She describes the airfield between the hours of 10 p.m. and 5 a.m.— the window of time allotted for mounting and uninstalling exhibits— as “the most beautiful place you could ever be.” And she loves seeing off-duty Customs agents “cutting up and having a good time.” But after being on the job for nine years, it is the belly of the baggage carousel that still leaves Dirga slack-jawed. “You start to get a real appreciation for being able to show up 30 minutes prior to flight time and still being able to check a bag.”

And like Bernhardt, you might also walk away with a whole new appreciation for Mayor Jackson’s foresight.