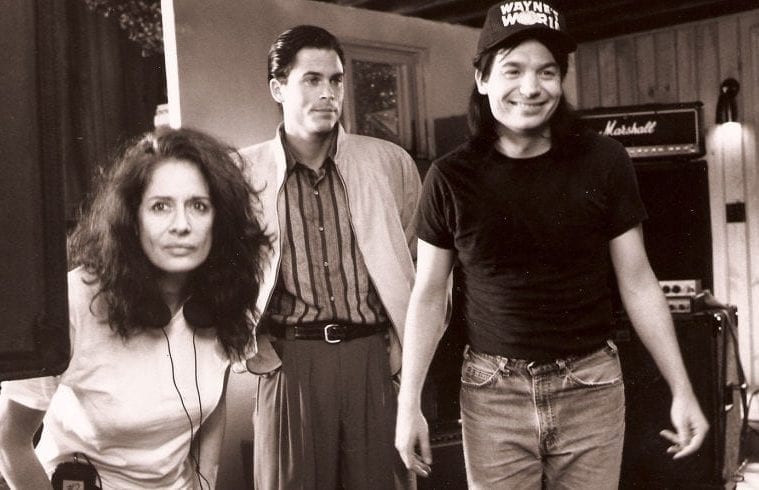 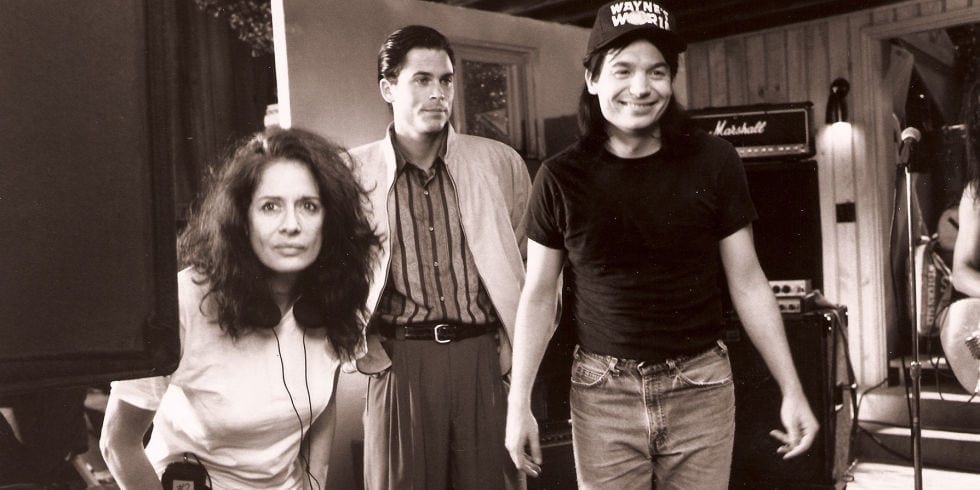 Spheeris on the set of Wayne’s World with Rob Lowe and Mike Myers.

Director Penelope Spheeris (Wayne’s World) will appear at Emory University Friday and Saturday to answer questions and introduce screenings of her three-part documentary series on punk and heavy metal music, The Decline of Western Civilization. The films have been restored in high definition and were reissued earlier this year as a deluxe box set.

The event is hosted by Emory’s Department of Film and Media Studies, along with the Emory College Center for Creativity & Arts.

Spheeris has worked extensively in music video and concert production, directed the indie feature Suburbia, and spent many years as a top-tier Hollywood director, helming such blockbuster comedies as Wayne’s World, Black Sheep and The Beverly Hillbillies before eschewing studio fare to pursue personal projects. 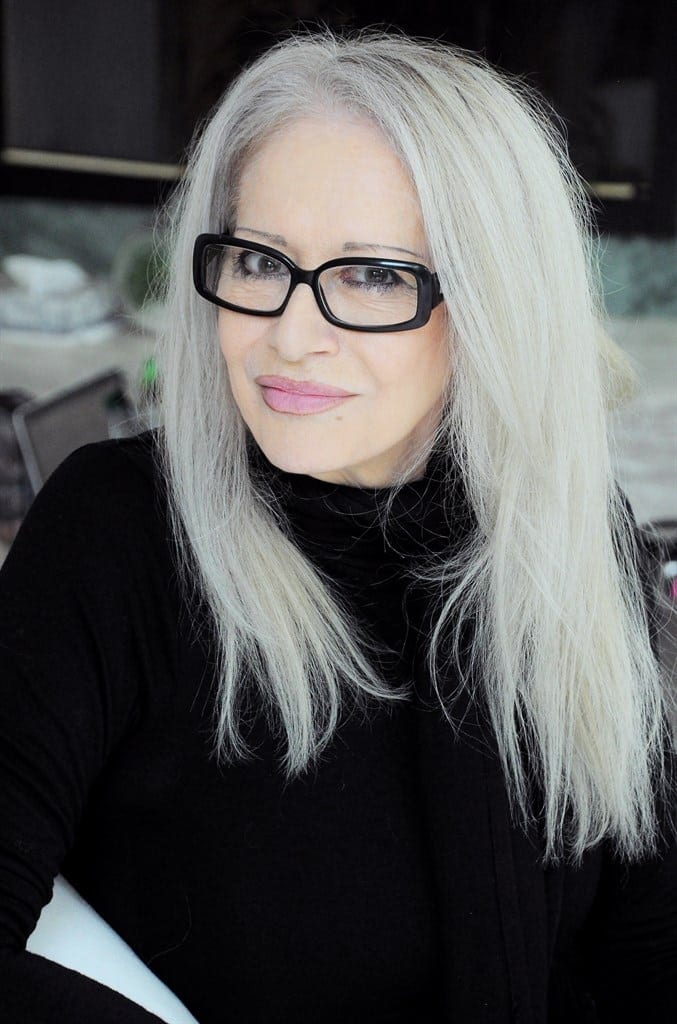 We caught up with the outspoken director in advance of her visit to Atlanta to ask her about the Decline films, as well as her perspective on the current state of Hollywood, and particularly whether things are changing for women in the industry. If her answers here are any indication, those in search of a truth-teller who pulls no punches are in store for a treat. She may even share her thoughts on Donald Trump, who appeared as Waldo’s dad in Spheeris’ 1994 The Little Rascals reboot.

ArtsATL: Why do you think the The Decline of Western Civilization films are so well received today? Why do they still resonate with audiences?

Penelope Spheeris: Not everybody had a cell phone back in the ’80s and that period of youth culture was not obsessively documented like it is today. So much of current style, music and fashion trends are deeply rooted in punk, so young people are interested in it from a cultural and historical standpoint. The audiences today are a lot more enthusiastic and receptive than when the film was first made. It was impossible to get The Decline of Western Civilization, Part III distributed. Decline I and II each got very limited releases. The passage of time has made the films more precious to people, and each film means something different to each generation.

ArtsATL: What is the difference watching each film with an audience today, as opposed to when the films first debuted?

Spheeris: There’s a big difference. With Part I, in 1980, we held a screening at the Writers Guild of America. The first person who spoke after the film said, “How dare you glorify these heathens!” This was extremely disappointing to me. I was bringing a new and exciting unseen part of these young people’s lives to a new audience. But they didn’t see it like that. They looked at it like I was promoting something evil. Decline III never even got a release. The only way I could get a release was if I gave up the rights to Decline I and II, which didn’t seem fair to me.

The reception now is very different. People react with a lot of emotions. People come up after screenings, literally crying, to tell me how these films changed their lives. That’s pretty cool. I guess if there’s a reason to make movies, then that would be it. From one extreme to the other. From being a heathens to changing peoples’ lives. Time heals all wounds. 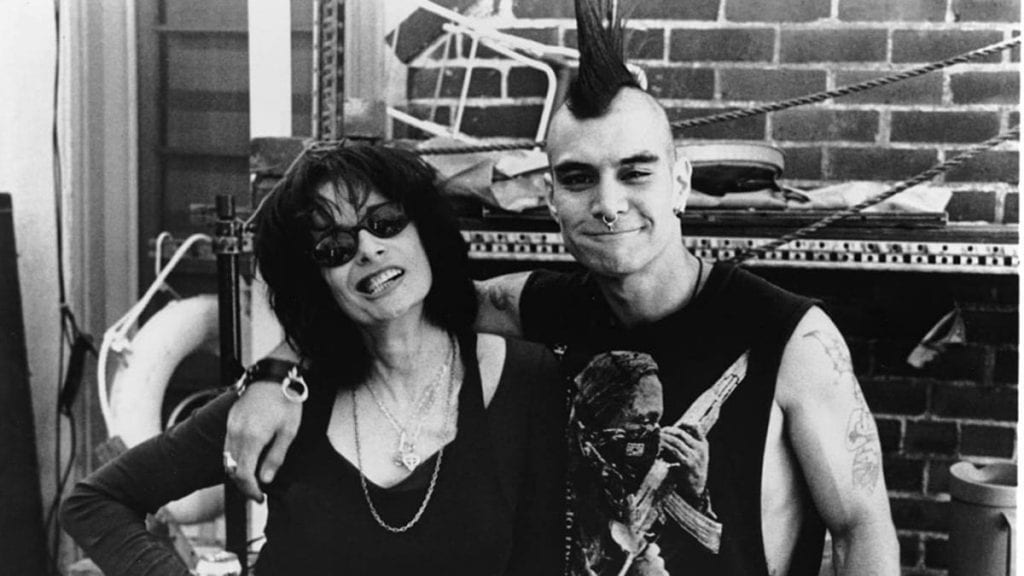 Spheeris while filming The Decline of Western Civilization.

ArtsATL: How did each of the Decline films come to be?

Spheeris: The first film came about because I was going to all these punk clubs and I realized that this is something I had never seen before. I was always a rock fan, but I had never experienced anything like punk. This was a pretty closed community, and I became friends with various people in the bands. So I decided to make a movie about the movement.

Part II came about when a small production company fronted some money and asked me if I could make any movie what would it be? I said, The Decline of Western Civilization, Part II: The Metal Years, because the metal scene was just beginning to blossom on Sunset Strip around 1986.

The third film happened when I quit the studio system to work on independent movies. I had been working with the Weinstein brothers on Senseless, and it was a nightmare dealing with some of the studio people. So, when I decided to leave that all behind, I spent the money I was paid for that project to [go back to my roots and] make a movie about this reemergence of punk.

ArtsATL: You’ve worked on other music films, so what do you feel specifically ties the Decline trilogy together?

Spheeris: These three films were done over a 20-year span, and that’s what the Los Angeles music scene was like from my perspective. From the late ’70s to the late ’90s. Punk rock is different from heavy metal because it’s really more about how the young people of those times were thinking. But the scene went from the austere do-it-yourself mindset of punk to an overindulgent, glam, “I’ll-do-anything-to-make-it” philosophy of the metal years. Then it swung back the other way to the gutter punks in Decline III, who really changed my life.

I started to really understand what was important to me, and that was to help other people. I became a foster parent after Part III and walked away from all the Hollywood bullshit. 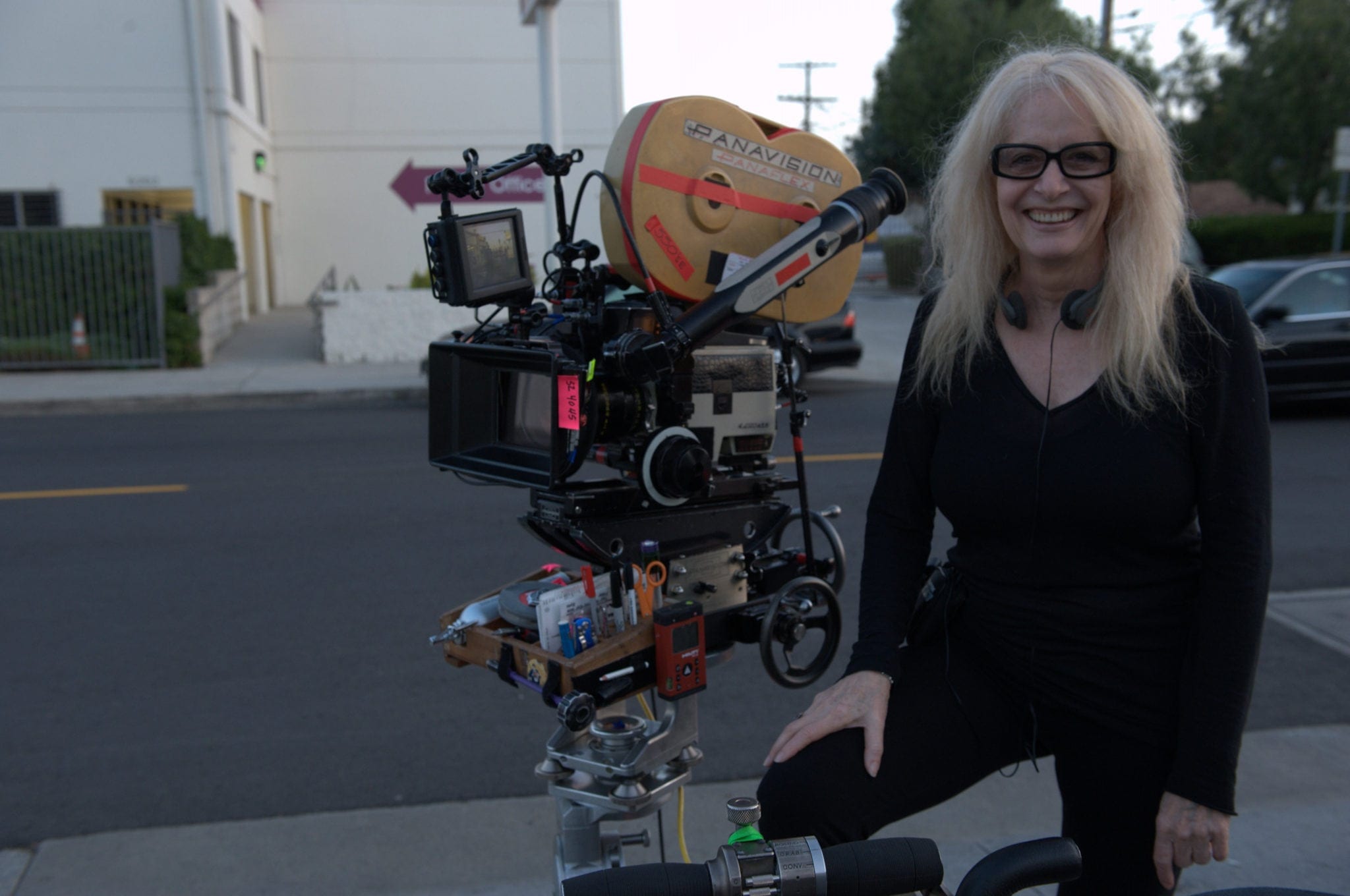 ArtsATL: Why has music played such a huge part throughout your career?

Spheeris: As a teenager, and even younger, I used music to escape pain of a chaotic family situation. I think a lot of kids are like that. It is comforting when you find the right kind of music. It makes you feel better.

The moment I put music and picture together as a student at UCLA, I still remember it vividly when I laid a song over two people walking down Hollywood Boulevard, in the film I made called I Don’t Know, I thought, “This is magic.” I went on to do “music movies” because that’s what I loved.

ArtsATL: You wove documentary films through a career of features ranging from indies like Suburbia to massive big-budget studio features like Wayne’s World and Little Rascals. Did you make a conscious choice to navigate between docs and features?

Spheeris: When I look back, I realize that if I had the choice to make documentaries for my entire career, I would have done it. Or also personal films like Suburbia which are drawn from real life. But you can’t always make a living doing that. I respect those who do it anyway. Once I did Wayne’s World and the film made money, I started to earn money. I wanted to go back and make more movies from scripts I had written, like Suburbia, that focused on punks. But studios don’t really want to finance those types of movies with a woman director. I started getting offers to do comedies because of Wayne’s World.

Of course, storytelling is storytelling, but I really find documentaries more gratifying and I wish I would have spent more of my life doing them. I would have offered more to the world if I did, but I hope people get some giggles out of the comedies. 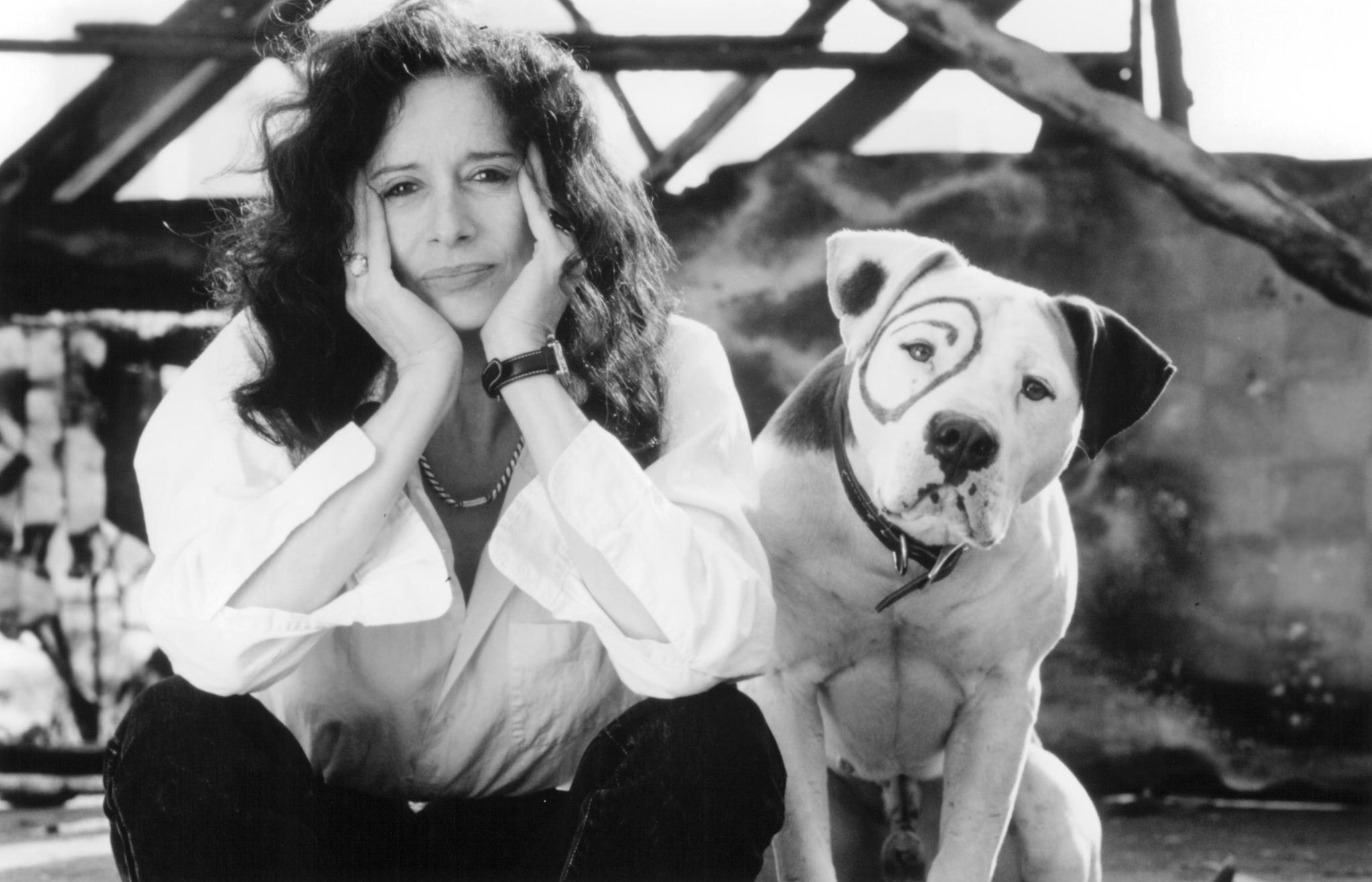 Spheeris on the set of The Little Rascals remake.

ArtsATL: Did the DIY punk culture influence your career?

Spheeris: What I learned from making first Decline film to always bring to have an edge to a project. There has to be something interesting going on, and it always has to be unique and personal. Oftentimes, filmmakers are too general, and try to please a wide audience. My experience early on with Decline gave me a certain sense of identity and a strength that I used to carry me through the studio pictures. I used to meet with the studio execs and I’d be wearing big lace up boots and punk rock gear. They might snicker a little, but they don’t really care how you dress, as long as the money is coming in.

ArtsATL: Do you see the role of women changing in Hollywood?

Spheeris: Honestly, I don’t see the role changing much. I do see a lot of media trying to encourage change, but I haven’t seen it implemented yet. I know the ACLU is threatening to sue the studios for discrimination, which makes a lot of sense to me. Here’s what I think — and I hate to be a pessimist here — there’s a flurry of activity going on right now about how we should love and respect women’s work in the system and about how the powers that be should employ more women in positions of power. But I don’t think it’s going to happen. If it does, I’ll be thrilled. Not for myself, because I’m done with that, but for other women because it was a bitch for me coming up.

ArtsATL: What opportunities and new challenges exist now that might not have been available before?

Spheeris: I’m happy and grateful I was able to make films when women — a few of us anyway — could make a living at it and were given some creative freedom. There are so few studio movies being made right now that there’s barely room for men [laughs]. The opportunities have to do with new outlets that are available today, through the Internet, self-distribution, and that sort of thing. The challenge now is that everyone is doing it, so it is hard to stand out from the crowd. The Internet is a blessing and a curse, and I’m not sure that the cream is rising to the top as of yet.

ArtsATL: What advice would you give to young filmmakers today?

Spheeris: So many people are trying to become directors, and I think they need to ask themselves, “Why?” Are they doing it for the right reasons? To me, it looks like they are in it for the glamour and the fame and the fancy cars and the red carpet and the cappuccinos. It’s not about that. It’s about having something to say, and making good films. Too many people are just going for it for stupid reasons.

Woody Allen said, “You’re either funny, or you’re not,” which sounds simple. But it is really quite profound. Either you are a director or you’re not. Each person has to find their own way in the world. They have to be honest with themselves, and ask if they are doing it for the right reasons, and do they really have something to say?