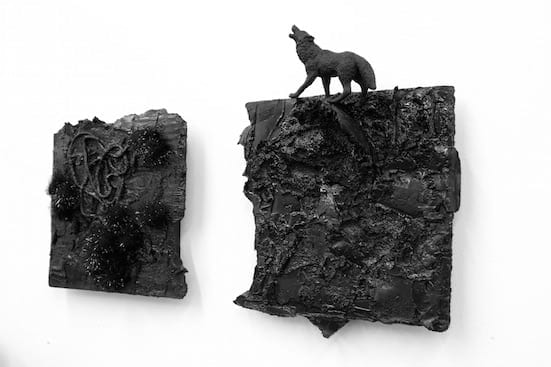 Preview: Thompson’s “Dark of the Moon” makes the universal personal

Dark of the Moon, sculptural works created by Athens-based artist Zipporah Thompson, will be featured at Whitsepace’s Whitespec Gallery January 8 through February 13. Thompson’s works will displayed in conjunction with the exhibition of new works by Mimi Hart Silver, entitled Territories/Kingdoms. Both artists coincidentally hail from North Carolina, where Thompson received her BFA in Fiber at the University of North Carolina. Thompson relocated to continue her studies as a graduate student at University of Georgia.

Thompson’s works in Dark of the Moon use fiber, clay and found materials assembled to evoke mysticism, mythos and metaphysics. The abstract sculptures are intended to remain ambiguous, but Thompson laces the structures with recognizable objects to provide a bridge between the realms of the known and unknown, or the conscious and subconscious. Susan Bridges, executive director of Whitespace Gallery, was drawn to Thompson’s mixed media assemblages because, “there is something dark, mysterious and familiar about this work.” These themes are also why Bridges chose Thompson and Silver to be exhibited simultaneously, as Silver’s work also explores the unknown and arcane.

Thompson’s study of fiber and fabric-making has influenced the recurrence of ritual as a theme in Dark of the Moon. The repetition of working fibers on a loom to create a cloth, dyeing the fabric, and sewing together the finished product, is an intimate and ceremonious process reminiscent of an ancient ritual. The comforting softness and familiarity of the textile is cleverly inviting to the viewer — a warm invitation that is thwarted by obscuring the material with, for example, thick swaths of black paint. 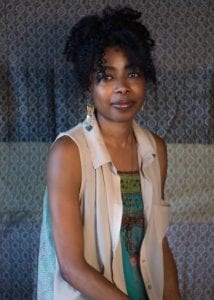 That Thompson’s work is designed to raise more questions than answers incites the audience to participate, whether consciously or subconsciously, in plumbing the strange world Thompson proposes. As Thompson explains in her artist’s statement, “The work activates the imagination of the viewer/audience in the participatory search for meaning and purpose in my work.” The amorphous abstract nature of her work is used to express universal themes that include “death, catastrophe, chaos and the cosmos.” Though the saying goes, “the most personal is the most universal,” Thompson’s work applies this theorem in the inverse. Viewers take the geological forms Thompson creates, whose heavy textures and colors could imply a host of ideas, and apply whatever pathos their own psyches may hold. This does not mean that the works do not reflect a deeply held value system of Thompson’s, or that she does not insert her ideologies into the works, necessarily. But the works themselves — and Thompson’s statements about the work — do not editorialize.

Though the work focuses on the universal, it can convey a sense of alienation which is, unfortunately, a fairly commonplace experience. Some of the objects she uses are recognizable, like a small wolf perched atop the sculptural diptych Dark Forest; others are not. Some of the materials that make up the sculptures are familiar but have been transformed so that they become unrecognizable — when stiffened with paint and manipulated into unnatural shapes, wool can become indistinguishable from clay. This process of revealing and obscuring, making known objects alien, veiling the true nature of a substance, mimics the sensation of feeling like an “Other” — a being estranged from the rest of the world. 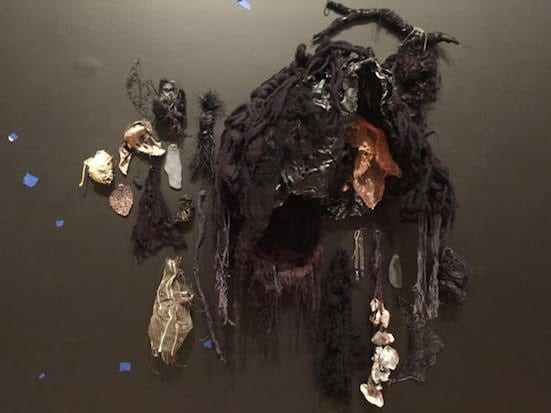 Untitled from Dark of the Moon

The organic shapes and eroded quality of the materials Thompson uses to assemble sculptures speak to an ecological interest that manifests throughout Thompson’s body of work. In 2015, the year she graduated from the MFA program at University of Georgia, Thompson created the series Sacred Canopy as a resident at The Hambidge Center for Creative Arts and Sciences in rural Rabun Gap, Georgia. The mixed media installation presented a stylization of the forest canopy at Little Tennessee River Basin and its watersheds; the canopy protects the various aquatic species that inhabit the watersheds, which the Georgia Forest Initiative is attempting to preserve. Other series she has created point to a similar influence: Menagerie, Treehouse Jungle and Echoes of the Forest each incorporate simulacrums of wild creatures or organic elements.

Depending on the viewer’s reading, Thompson’s work can offer a tool for divination, self-reflection or meditation, or a totem for the creation of chaos magic. It can reflect the divinity of the natural world with its engagement with topographical formations, or it can represent the degradation of nature through the manipulation of handmade materials into twisted, unrecognizable chimeras. Should you wish to embrace the unknown, Thompson’s work will be on view at Whitespec Gallery, alongside Mimi Hart Silver’s Territories/Kingdoms at Whitespace, from January 8 through February 13.