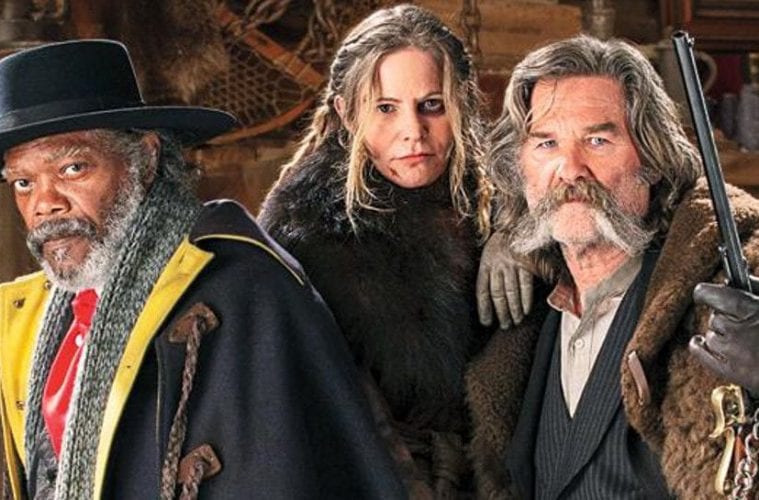 On Christmas Day, Regal Cinemas Atlantic Station 18 and the AMC Southlake Pavilion in Morrow begin exclusive area engagements of the premier of Quentin Tarantino’s The Hateful Eight. Georgia is fortunate to host two of 100 theaters in the U.S. that have been specially equipped to present the film as a celluloid 70mm film print.

Reviving a dormant gimmick that started in the early 1950s and lasted into the early 1970s, theatrical “roadshow releases” were prestige screenings intended to combat the rise of television. The roadshow screenings framed movies as spectacles and showed off a big screen cinematic experience that couldn’t be replicated with a small box screen at home.

Roadshow releases of such films as The Ten Commandments, Lawrence of Arabia, Dr. Zhivago and 2001: A Space Odyssey gave audiences the chance to see a big picture in advance of its theatrical release with perks like reserved seating and souvenir programs, as well as technical upgrades that included six-track stereophonic sound (as compared to then industry standard mono).

In most cases, the program also included exclusive bonus footage or special scenes not intended for the theatrical version. There was usually an intermission to further mirror the esteemed experience of live theatre.

Thomas Hauerslev — editor of in70mm.com, a website dedicated to large form films — says the release of The Hateful Eight in the larger format is significant. “Bigger is better,” he says. “70mm says WOW! The 70mm signals a superior film that no other motion picture or digital format can match.”

Tartantino is known for his love of film history and for making films that evoke classic genres. He shot The Hateful Eight on super-widescreen film that comes to full life on 70mm screens. The 70mm edition will include about six minutes of footage not seen in the theatrical release, and will include an overture and an intermission.

Most movie houses these days don’t even use film; they are screened digitally. In order to accommodate Tarantino’s grandiose vision of screening his film on 70mm celluloid throughout the country, venues had to be retrofitted with 70mm projection equipment, much of which had to be salvaged, rebuilt, reassembled and installed booth by booth, at a cost of approximately $60,000 per screen.

Add to this the cost of producing over 100 70mm film prints. Each includes lab processing, developing and printing over 20,475 feet of celluloid into Herculean reels. The Hateful Eight 70mm print is on five 4500-foot reels, each with a 22-inch diameter and weighing over 40 pounds.

Multiply the additional packaging and shipping costs for all 100 venues by the installation costs, projectionist training and dedicated labor necessary at each venue to manage the logistics, and you begin to get a sense of what a significant commitment has been made to this endeavor.

“70mm can’t turn a bad film into a good one,” Hauerslev says. But he does think a good film is “even better in 70mm.”

The early reviews for The Hateful Eight have been mostly positive, and Hauerslev has high hopes that the film could be the beginning of a new wave of 70mm releases.

Hauerslev compares the 70mm experience to listening to a vinyl LP record through a stereo powered by a tube amplifier. He believes that the public will demand more 70mm releases once they are blown away by the experience. “The improved quality is noticeable at once: big, bright and sharp images,” he says. “Movies are far more intense on an unconscious level because the brain has three to four times more picture information to process.