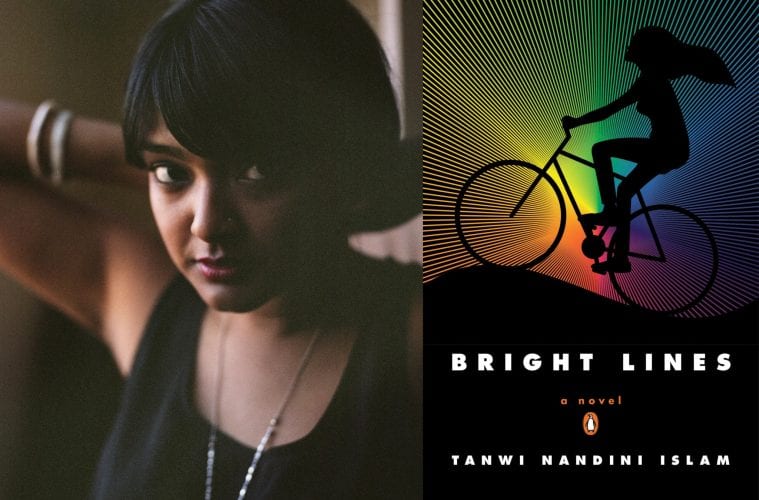 In Bright Lines, Tanwi Nandini Islam’s refreshing and delicate debut novel, the Saleem family — parents, Bangladeshi immigrants Anwar and Hashi, and their American brought-up teenage daughters Charu and Ella — live a full life in Brooklyn without any of the usual immigrant angst about whether they are American. They are.

Instead, they wrangle over the meaning of family and how best to fit in with each other. While Hashi does worry about Charu’s immodesty, the pot-smoking, philosophical Anwar worries about Charu’s non-conformity.

His bigger worries concern Ella, his adopted daughter, and how he is going to ever tell her the secret about her parent’s deaths. Ella, in turn, harbors secrets she is terrified to even face herself. Shuttling between Brooklyn and Bangladesh, Bright Lines explores in fast-paced prose and haunting descriptions of flora and fauna, the very nature of family, revenge, guilt and acceptance.

Islam will give a reading at the Letters Festival at 11 a.m. on November 14. She will be in conversation with Jericho Brown at the Decatur Library Auditorium at 7:15 p.m. on November 16.

ArtsATL: How did you get the idea for Bright Lines?

Tanwi Nandini Islam: Bright Lines is a convergence of my interest in history, war and migration, sexuality and botany. The first image of Anwar Saleem painting his apothecary on Atlantic Avenue takes place post 9/11, when the Brooklyn neighborhood of Clinton Hill was amid a wave of transition. I wanted to situate a Bangladeshi family at a crossroads in this era and tell a story that had not yet been told in South Asian narratives. Islam: Bright Lines alludes to the character Ella’s hallucinations, as well as a sense of ascension, lineage and the vivid, colorful characters in Brooklyn and Bangladesh.

ArtsATL: How much of your own Bangladeshi heritage and Brooklyn upbringing informed the lives of these characters?

Islam: I was a rebellious teenager like Charu, and had a complex sexual and intellectual inner world like Ella. Like many Muslim teenagers, I questioned the faith I’d grown up in and wanted to explore a continuum of young Muslim characters’ lives in relation to each other.

ArtsATL: Did you consciously work on including diversity in Bright Lines?

Islam: I was born in Carbondale, Illinois, and grew up in Missouri, Alabama and Texas before settling in New York in the early ‘90s. I was in the suburbs, though. During my first visit to NYC, at Washington Square Park, I was taken aback by all of the students, visitors, hawkers and performers. That was the New York I wanted to know. Brooklyn, in 2003, is very different from what it is now — and in many ways, Bright Lines is a love letter to that Brooklyn. I wanted to craft a world where a Bangladeshi family lived in such a neighborhood with a profound history in the U.S.

ArtsATL: South Asians have often grown up being told that blood is thicker than water. Bright Lines explores the nature of real vs “fake” family.

Islam: The very notion of blood family is questioned throughout the novel. All of the characters build families with the communities they belong to — Hashi in her beauty salon, Anwar in his Apothecary, Charu, Ella and Maya with each other. The tenuous family relationships point to the reality that blood cannot determine harmony, rather it is something that must always be negotiated.

ArtsATL: So many immigrant parents struggle as their children assimilate into American culture. But Anwar is different.

Islam: Anwar himself doesn’t fit into the mold of a Bangladeshi man, so it makes sense that he, as someone who is coming of age in his own way (in his middle age), is someone who has more in common with his daughters than you would think upfront. Anwar loves the ways his children are different, and wants to help them fully realize who they are.

ArtsATL: Bright Lines takes us into the heart of the 1971 Bangladesh War of Independence as well as the contention between the Bangladeshis and the Pahari people, indigenous folk who do not necessarily see themselves, or are seen, as Bangladeshi. How do you think one can make sense of freedom fighters turning into oppressors?

Islam: War brings out the ugliest parts of humanity. Although struggles for freedom are necessary and in some ways noble, the truth is that it is a bloody business. The striving for a dominant culture to emerge in the nation state in and of itself is a very violent reality. The outsider status designated to indigenous people of Bangladesh, as well as Bengalis as citizens of East Pakistan, are parallel histories in which the oppressed and oppressors often occupy the same identity in the same breath.

ArtsATL: Can one ever escape the fingers of history?

Islam: There is no way to escape the history of our people, as far as we try to live. For Anwar and Hashi, returning to Bangladesh after a harrowing year in their marriage, allows them to reckon with their past, and create a new phase of loving each other. Their daughters discover Bangladesh through the lens of an outsider; although Ella was born in Bangladesh, and it is the place her parents died, she has never been there before. So it’s a way to draw connections between what they’ve left behind, and what their daughters will inherit.

ArtsATL: You are the proprietor of a handcrafted perfume and skin care line. How does the olfactory inform your writing?

Islam: I’ve always had a very sensitive sense of smell, and my travels have always been marked by bearing witness to the differences in nature and the scents you find where you are. Those scents become a part of the memory, and when we recall important moments in our life, it’s often a story embedded in a milieu of sensual experience. Scent, being our oldest sense, is the one that I think draws us deepest into those memories.