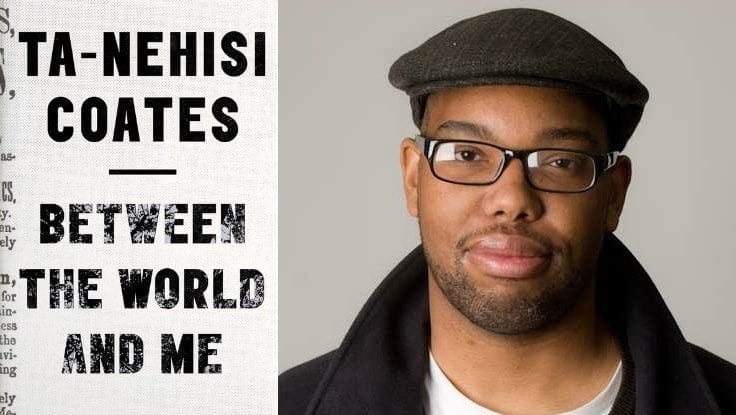 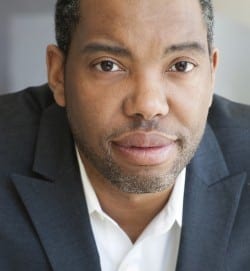 With those words, Samori Coates quietly left his father’s side, slipped into the safety of his bedroom and wept.

The 14-year-old had stayed up until 11:00 p.m., expecting to hear that the police officer who’d shot and killed Michael Brown would be indicted for murder. Instead, Coates’ innocence was shattered.

That moment marked a turning point as well for Samori’s dad, Ta-Nehisi Coates, a national correspondent for The Atlantic magazine. He could either rush in and offer bromides to mitigate his child’s pain — “We shall overcome! Keep hope alive! God don’t like ugly!” — or he could tell his boy the truth.

He chose the latter.

Coates, a 2015 MacArthur Grant recipient, will speak at the Jimmy Carter Presidential Library and Museum on October 20. (Sorry, sold out.)

Between the World and Me (Spiegel & Grau, 176pp) was written as a letter from father to son to explain how our nation has accepted violence against African-American bodies as normal — since the advent of slavery in the 17th century to a current-day criminal justice system that is statistically more inclined to presume guilt, indict and incarcerate black suspects than their white counterparts.

The book, which Toni Morrison calls “required reading,” also examines how America’s racist history has undermined (if not decimated) African-American communities and allowed white people, the biggest beneficiaries of discriminatory policies, to remain oblivious to the privileges they enjoy as a result of compounded miscarriages of justice.

“While many Americans are grappling with such racially charged issues as state-sanctioned violence and the prison pipeline,” observes Nathan McCall, author of the autobiography Makes Me Wanna Holler, A Young Black Man in America and a senior lecturer at Emory University, “Ta-Nehisi has articulated in this book a very disturbing truth — that after centuries, America has yet to demonstrate the will to squarely confront its racial demons.”

Appearing on WNYC’s The Brian Lehrer Show shortly after his book was published last summer, Coates argued that America cannot confront her demons unless she accepts the fundamental truth that the nation “was founded on the taking of land from one people, and the importation of another people to work that land.” 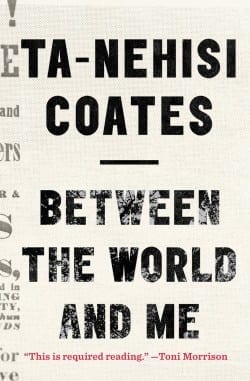 Between the World and Me makes the case that Americans’ belief “in the reality of race, as a defined, indubitable feature of the natural world,” and racism, which he defined as “the need to ascribe certain features to certain people — then humiliate, reduce and destroy,” have curtailed black people’s ability to acquire and build wealth at every turn. By lack of equal access to social safety nets like high-performing schools, adequate health care and ancestral wealth. By de facto social policies like block-busting and red-lining. And by Federal Housing Authority laws that were written to exclude black people from home ownership.

Coates also illustrates how achieving wealth and social capital — through marriage, friendship, neighborhood organizations or even proximity to success — is virtually impossible for anyone growing up like he did in the 1980s. “To be black in the Baltimore of my youth was to be naked before the elements of the world, before all the guns, fists, knives, crack, rape and disease.”

As well, even the most pedestrian activities required extraordinary premeditation. “Each day, fully one third of my brain was concerned with who I was walking to school with, our precise number, the manner of our walk, the number of times I smiled, who or what I smiled at, who offered a pound and who did not — all of which is to say that I practiced the culture of the streets, a culture concerned chiefly with securing the body.”

The only portal from such grinding chaos was television, where the American Dream unfolded as a vision of  “pot roasts, blueberry pies, fireworks, ice cream sundaes, immaculate bathrooms and small toy trucks that were loosed in wooded backyards with streams and glens.”

In time, he concludes that the perks ought to come with a price. “Pride in being American comes with a responsibility for her history,” he writes. “You don’t just get the credit. You get the debit.”

But McCall wonders “whether we have the national will to invest in such an effort. The social problems that blacks experience daily were methodically structured into the fabric of this country,” he explains.

“I remain mystified about why people don’t understand that at least the same amount of resolve and resources are required to methodically remove barriers to black success and upward mobility.”

Howard University, or The Mecca, as Coates refers to his alma mater, was the resource that bridged the gap between himself and a wider world. A world where purveyors of political cant had to defend their sloganeering with scholarship. A world where “the cable wires… extension cords… [and] ritual switches,” once used to mete out corporal punishment by loving-but-hard parents were replaced by the revelation that “love could be soft and understanding.” And a world where the future writer first considered the notion that “perhaps I too had the capacity for plunder,” when called out for his straight-privilege and mindless assumptions about gay classmates.

Fatherhood was another accelerant to Coates’ evolution. In one of the most moving passages of Between the World and Me, his mother-in-law tells the father-to-be, “You take care of my daughter.” “My world had shifted,” he recalls. “I felt that I had crossed some threshold out of the foyer of my life and into the living room.”

Life in Paris, where Coates and his family currently reside, proves a bittersweet frontier. As he watches his son navigate the city, the boy’s mix of curiosity and courage stir feelings of pride and regret in the father’s heart. “I wanted you to have your own life, apart from fear — even apart from me. I am wounded. I am marked by old codes, which shielded me in one world and then chained me in the next.”

Samori, on the other hand, is forewarned… but free.