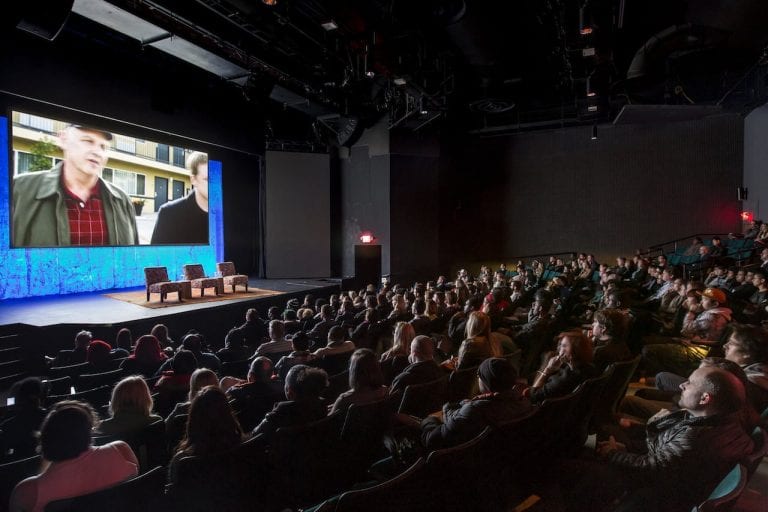 As Danny Filson explains it, aTVfest is sort of a combo festival rolled into one. It’s not only an opportunity for local Savannah College of Art and Design (SCAD) students to interact with and learn from professionals in the TV industry, but also an opportunity for the general public to preview upcoming television fare, spot some big names and look at the present and future of the industry.

Filson is the executive director of the three-day aTVfest, which returns to Atlanta this week, February 5 through 7. Now in its third year, the event — presented by SCAD — was hatched to fill the void of any such festival celebrating TV programming. It’s held in and around the SCAD campus, as well as the redesigned, 13,300-square-foot SCADshow, formerly known as the 14th Street Playhouse.

SCAD Atlanta officially opened in 2005, offering degrees in film and television, and the state has changed dramatically since then, becoming a hotbed for the filmmaking/TV industry.

“The changes have made it possible to work in one’s backyard,” Filson says. “We are conscious and very aware that our graduates are working in the industry and working in the state of Georgia. You don’t have to leave the state to be a working professional. If you have that comprehensive understanding of the industry, you’re going to work [here].That was not the case five years ago.”

SCAD students have that understanding and built-up experience as they leave — to even graduate they must have at least one internship in the industry.

As in previous years, awards will be doled out. Timothy Hutton, an Oscar winner for Ordinary People as well as a television fixture, will be on hand to receive the Icon Award and discuss his new ABC series American Crime, costarring Felicity Huffman and written by John Ridley of 12 Years a Slave fame.

Terrence Howard from Fox’s popular Empire will be present to get the Spotlight Award, while the Rising Star Award will be split by the young cast of ABC’s How to Get Away With Murder — Alfred Enoch, Jack Falahee, Aja Naomi King, Matt McGorry, Karla Souza, Charlie Weber and Liza Weil. aTVfest will close on Saturday evening with a screening of HBO’s Girls, with actors Alex Karpovsky and Andrew Rannells present.

Other screenings include Pivot’s Fortitude, HGTV’s Ellen’s Design Challenge, BET’s The Book of Negroes, Fox’s The Following and The Mindy Project — followed by a Q&A with star Mindy Kaling and her team of writers.

The names are nice additions, but they aren’t coming in for the glory. “They come not because of the awards but because of what they want to share,” says Filson. “When someone comes in, they don’t just fly in and fly out, they spend time with students. That is a tremendous give-back. They become our teachers.”

Among the panel discussions are “Must-see TV: The Secrets Behind Network Series Scheduling,” “The Real Side of Reality TV” and “Navigating the New World Order: The Future of Television From a Cultural Perspective.” A media panel will offer up a roundtable of TV journalists examining the status of today’s television, while “Spotlight Atlanta: Casting, Agents and Management” will be a talk on Atlanta’s thriving film/TV industry and how to get involved.

Another popular segment of the event is the SCAD Student Showcase, a juried show consisting of comedy, drama and web series.

One aspect of the event that has Filson excited is the breadth of the schedule. He calls the three-day programming far-reaching. “The students can see the entire gamut of scripted TV to non-scripted TV, from brand-new distribution models to traditional models,” he says. “When we look at the panels and workshops, we have been able to bring in the top individuals as well as those making new roads. We have to say what exists now and what will exist five years from now. That’s why we have the diversity in the schedule. Whether it’s a student, the general public or a TV/film executive, it is important to experience multiple panels and screenings. It’s going to give them the clear understanding of where the TV industry is today, where Georgia sits right now and where the industry will be in five years.”

While aTVfest is advantageous for SCAD students, Filson and his staff have worked hard to make it something special for the area and for the general public. “We do what we do for the students, but if that was the only reason it wouldn’t be open to the public,” Filson says. “As with virtually everything, this is a ripple effect. You do it because it is a tremendous benefit to the entertainment industry as a whole and to the state of Georgia.”

Passes are available for individual sessions, an entire day or the entire festival.