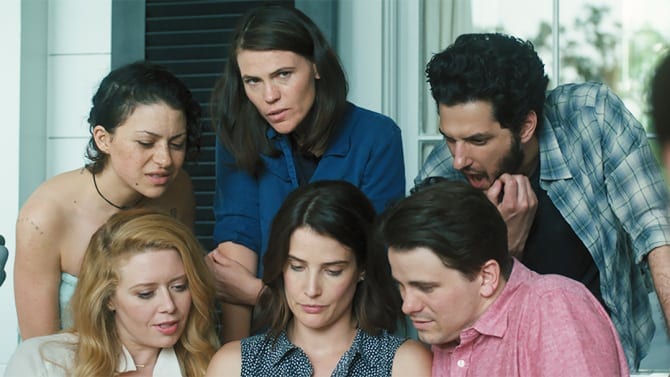 Actress Clea DuVall wasn’t in Savannah for that long of a period but it left an impression. So much so that, when it came time to direct her first film, she returned to the area.

In her new film The Intervention, opening Friday at the Plaza Atlanta Theatre, four couples gather at a Savannah home, seemingly for a weekend of R&R. Meddlesome Annie (Melanie Lynskey), however, has persuaded most of the group to come together to convince volatile husband and wife Peter (Vincent Piazza)  and Ruby (Cobie Smulders), who arrive mid-argument, to consider a divorce. Besides Annie’s fiancé Matt (Jason Ritter), the guests include Jessie (DuVall) and Sarah (Natasha Lyonne), a lesbian couple who still don’t live together after three years, and Peter’s friend Jack (Ben Schwartz) and his much younger new girlfriend Lola (Alia Shawkat). As the weekend progresses, the tide changes somewhat in what the guests seek to accomplish.

After a 20-year career, including a plum role in the Oscar-winning Argo (in which she starred as one of the six Americans who escaped from the American embassy during the U.S hostage crisis in Iraq), DuVall realized it was time to make her own movie. “I had wanted to direct something and I really love writing, but I felt intimidated by both of those things,” she says. “I wasn’t very active. I was really inspired, though, by the people around me, actors who had been making their own projects, directing their own films and writing their own films. I decided I wanted to give it a try and I wrote this script with the intention of directing it.”

The film is an unabashed ode to The Big Chill, a film she cherishes.

“The Big Chill was a really important film to me when I was a kid,” she recalls. “(The characters) had very adult feelings and ideas that I didn’t totally understand then. I really appreciated how I felt, seeing main characters who were flawed but fascinating and had such complicated friendships and relationships. I had not seen it since I was a kid. When I went into production, I didn’t want to see it. I wanted to have the idea of it in my head, just not the literal pictures of it.”

It was important for her, as a writer, to make the film as universal as possible, showing four couples at very different stages of their relationships.

The film pairs her with Lynskey and Lyonne, two of her best friends. DuVall was very grateful to have both on set, for their talent as well as their support. “I was excited that this was happening, but I was a little bit nervous,” she says. “So it was nice to have them there.”

She wrote the character of Annie specifically for Lynskey, but did not create Lyonne’s role for her. It dawned on her afterward, though, that Lyonne, with whom she had worked together in the cult classic But I’m a Cheerleader, was an inspired choice.

When she wrote this script, DuVall had Savannah in mind. “I had been there 10 years before and thought it was such a magical, beautiful, strange place,” she says. “I wasn’t there for that long — I was just visiting. I travel a lot for work and go to so many cities and towns, and none of the places really linger. Savannah was a place I did not spend very much time, but it did linger. It remained in my mind. I wrote this and wanted it to take place at that house (I visited). I didn’t know if that was going to happen. There was a lot of hoping it would work out, and it did.”

She and the cast and crew began filming in the summer of 2015. It was a quick shoot — just 18 days. Yet the Georgia heat caught some unprepared. “It was so hot,” DuVall says. “People were falling down. Our [director of photography] got heat stroke. It was rough, but everyone held up well and worked hard and you can hardly tell people were falling apart.”

It wasn’t easy juggling acting and directing, but she got through it all. “If we had had more time and if I had done it before, or had playback, it would have been a little easier,” she says. “I could never see what we had. I had to have a lot of trust that we were getting what I wanted. At the same time, when I watch the movie, I am so happy I am in it.”

The film premiered at Sundance earlier this year and won a Special Jury Award for Individual Performance for Lynskey, whose warts-and-all portrayal as a friend with her own set of problems ( and an ever-present glass of wine) grounds the film.

“It was really emotional,” DuVall says. “Every single person making an independent feature is hoping for that to happen. I did not let myself think of it. Most do not get in Sundance and I prepared myself for that. It was a special moment for me. Sundance is really the only reason I have a career at all. The first legitimate thing I ever did was, as an actor I was involved in the director’s lab they have there. That is how I got a manager and how I even started working.”