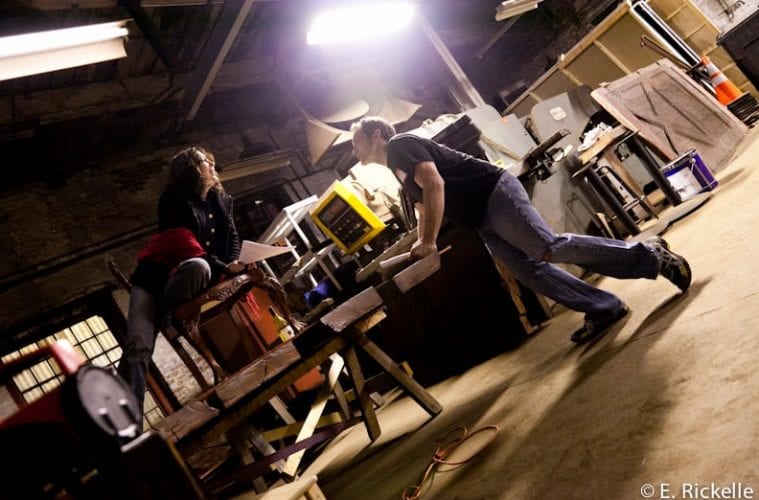 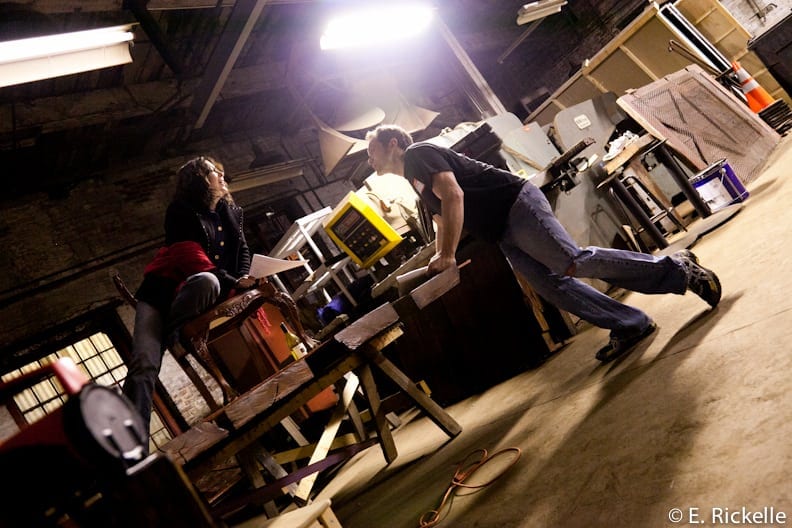 "Rua | Wülf" will make special use of the Goat Farm's expansive grounds. (Photo by E. Rickelle)

A red cape that pulses with light whenever it’s touched. A grandmother held to a wall by a system of roots. An upside-down meadow of flowers trembling in the wind. An audience that follows a meandering path through a fairy tale, stopping to enjoy a tea party along the way.

These surreal visions and many more are planned as part of the ambitious new play “Rua | Wülf,” which premieres April 11 at the Goat Farm.

The performance will utilize the 12 acres of crumbling Victorian industrial architecture at the venue, now an arts complex on Atlanta’s Westside. Each night at dusk, an audience of 50 people will be led through a grimly surreal adult retelling of the story of “Little Red Riding Hood,” with sets and installations spread over 19 locations around the property in a roaming experience created by a small army of visual, performance, sound, design and architectural artists.

The show will begin each evening at 8 p.m. as the sun sets. The audience will assemble at the Seed House, an octagonal studio, which will become the mother’s cottage in the opening scene. From there, led by a narrating guide, the audience will follow the characters to observe the various meetings between the girl Rua (AC  Smallwood) and a mysterious wolf-character named Hemming (Tim Batten). At intermission, the guide will lead the audience members to a secluded garden spot, where they’ll find a table set for a formal tea.

The show will be the first production of the new theater group Saiah. Two of the founding members, Marium Khalid and Phillip Justman, met as students in the drama department at Kennesaw State University. Their first performing arts group, the Collective Project, mounted shows at Kennesaw State and then professionally in the Atlanta area after graduation.

Their most recent show, “The City of Lions and Gods,” was a moving portrait of the experiences of Khalid’s great-grandmother during the struggle for Pakistani independence. Produced in a basement-level room at the Goat Farm, it was an unexpected audience and critical hit last August. The show even earned the No. 1 spot on ArtsATL’s list of top Atlanta theatrical productions of 2011.

Khalid and Justman recently splintered off from the still-existent Collective Project. “Rua | Wülf” is the first major undertaking of Saiah, which takes its name from the Urdu word for an oasis-like spot of canopy shade.

The impetus for the production came during performances of “City of Lions and Gods.” The personal and emotionally charged story of Khalid’s great-grandmother prompted some participants and audience members to open up about their own life stories after the show. “A pattern we saw is that people would focus on relationships between a predator and a victim in their lives,” explains Khalid, who wrote both plays. “We thought the tale of ‘Red RIding Hood’ would be a way to explore that. The idea of the roaming performance came from just wanting to utilize the Goat Farm fully. It’s such an incredible space.”

Justman says that Khalid’s play takes the story of “Little Red Riding Hood” and makes it more about the “why” of the tale. “We’ve focused on the idea of choice and consequences,” he says.

Justman’s sister Tian, also a member of Saiah, is a fashion designer who created the costumes for “Rua | Wulf.” “Fashion has to be wearable, and costumes have to be wearable,” she says. “But you can definitely go over the top in service of the story.” To that end, she’s built elaborate costumes for each character, including a red cape lined with touch-sensitive LEDs for a scene in which Rua contemplates her newfound independence. Tian also made a series of coats for Hemming that get more and more covered with embroidery as the evening progresses.

Glowing capes don’t exactly grow on trees (or even Goat Farms). To raise money for the production, the resourceful group used the new Web platform Kickstarter, which allows artists to solicit funds for potential projects online. With a slick promotional video featuring eye-catching visuals and the show’s tagline “No man is a wolf until he is made into one,” the group quickly surpassed its goal of $3,000 and raised over $4,100.

“Part of our philosophy is to take on each new challenge by approaching it with a simple question,” says Tian Justman. “What would you do if you knew you couldn’t fail?” With that in mind, the artists of Saiah are forging an original path to bring their ambitious vision to life.

“Rua | Wülf” will run April 11-29 on Wednesday through Sunday each week. Tickets are available for $25 at Brown Paper Tickets or $30 at the door. There will be one intermission, where tea and light fare will be served. Audience capacity is limited to 50 people per performance. Patrons are encouraged to purchase tickets in advance, to wear comfortable shoes and casual clothes, and to arrive at 7:30 p.m. for the performance at 8. Preparations have been made that will allow “Rua | Wülf” to be presented rain or shine.