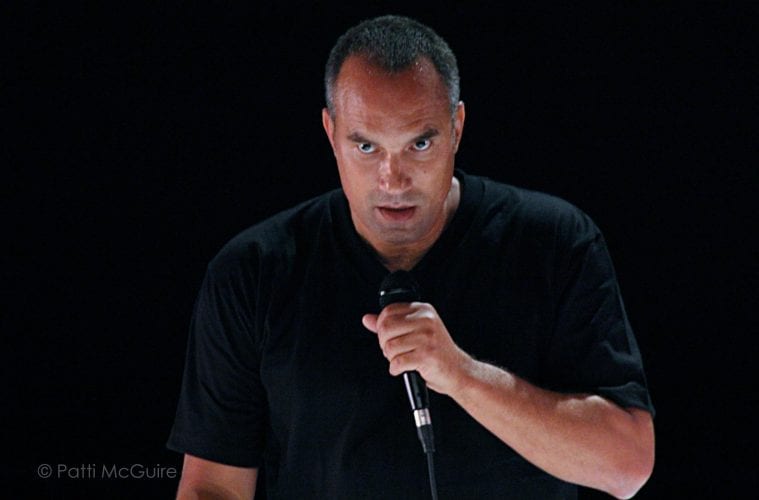 Actor Roger Guenveur Smith never met Rodney King, the construction worker who, in 1991, was beaten by white police officers in Los Angeles — officers who were later acquitted — setting off riots all over the city. Yet King has certainly been an influence in his personal and professional life.

His one-man show Roger Guenveur Smith: Rodney King debuts in Atlanta this weekend, with performances January 15-16 at 8 p.m., at Georgia Tech’s Ferst Center for the Arts. It’s a piece that brings the late King to life and examines race relations in the United States.

The performer was getting ready to research a piece on Otto Frank, the father of Anne Frank, when he learned of King’s death in the summer of 2012. Moved by that, he wanted to know exactly what had happened.

Smith had referenced King several times in his previous works, including a production he orchestrated the weekend after the beating, in which he predicted that the officers who beat King would be acquitted. “Rodney was never the butt of jokes but a symbol of resiliency and wisdom,” he says.

A few months after King’s death, Smith was on stage — again — in Los Angeles trying to work King out. Smith thought this new work was going to be an abbreviated memorial/meditation, something for the season lamenting King’s loss. Yet it resonated, and he has taken it around the world, including New York, Amsterdam and London.

While doing his research, he was careful in what he took in. Unlike other productions he had created, he did not approach family members or friends of King. He read King’s autobiography and all the references he could find. “It was important that I approach it as an outsider,” he says. “In a way, Rodney King was kind of consumed by outsiders, folks who did not know him at all.”

At a time when race relations are as problematic as when King was beaten, Smith feels what King had to say was invaluable, particularly what King said in a speech after the acquittal. “He had an instructive moment when he said we are all stuck here for a while; let’s work it out,” Smith says. “It’s a simple message but one worth listening to. He was not a scholar. He improvised his speech. He was given a speech by his lawyers to deliver but he rejected it and went with his heart. I happen to think that the speech King delivered, in which he asked if we could all get along, is one of the great American speeches, up there with another King.”

This King, however, did not graduate from high school and could not assume a life of leadership. Smith calls him a blue collar worker who found himself in an extraordinary circumstance, as an ordinary man. “Yet the message that he imparted was indelible, useful for those of us willing to listen,” he says.

Smith was heartbroken when he heard of King’s death, especially considering the timing. “It was tragic to lose him on the 20th anniversary of the riots,” he explains. “He was doing a book tour and speaking engagements and was very much in high demand and regard. Those of us who cared about him were happy. We thought he was on his way back, but he lost his life at the bottom of his backyard swimming pool.”

He is particularly pleased to be presenting this show locally over Martin Luther King Jr. weekend. Ironically, he is taking a break from directing the drama The Mountaintop — about Martin Luther King’s last night on earth — to bring the show to town.

As an actor, he has divided his time between television, film and theater, with highlights including American Gangster and HBO’s Oz. Some of his other theatrical works have been A Huey P. Newton Story, based on the Black Panther founder, and Juan and John, about the notorious baseball fight when San Francisco Giants pitcher Juan Marichal attacked Los Angeles Dodgers catcher Johnny Roseboro with a bat during a game.

Smith had a huge 2015. He was seen in the critically acclaimed film Dope and at the end of the year appeared in Spike Lee’s Chi-Raq. In all, he has worked with Lee on nine films, including School Daze, which was filmed in Atlanta.

As well, his much buzzed-about new film The Birth of a Nation, about a former slave leading a liberation movement to free African-Americans, will debut at Sundance next week.

The artist picks his theatrical material based on what he deems curiosity and ignorance. As he was readying this show, he felt even more of a kinship with King. “I felt like I had lost a blood brother — and the journey was finding out why Rodney King mattered so much to me.”