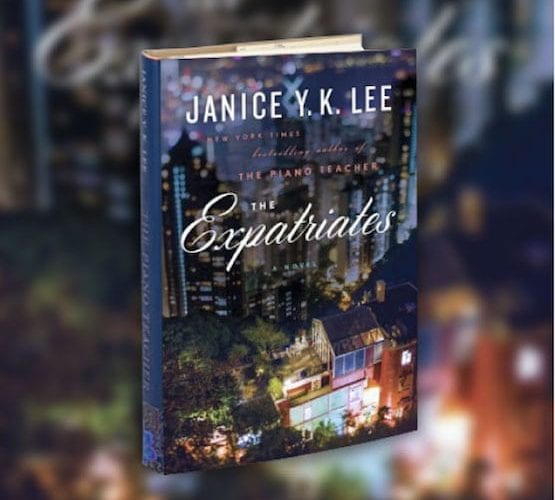 Preview: A Conversation with Janice Y.K. Lee, Author of “The Expatriates”

“Where are you from? How long do you plan to stay?”

From W. Somerset Maugham to William S. Burroughs, there is a long and celebrated lineage of expat literature. The most well-known novels focus on the excesses and trials of the great white male protagonist who is traveling into the heart of himself and into the interior of a lush and intoxicating landscape. Almost by default, the expat of the Western canon is disinvested of and mostly protected from the economic and political realities of his host country. What happens there is a matter of background drama. A civil war, an endemic, a minaret’s call to prayer – they serve as kind of music from another room. For those reasons, and given the particular hardships of immigration and asylum in this moment, it is difficult to muster great reserves of curiosity or sympathy for the expat experience, even as Syrian refugee children are washing up dead on the shores of Greece. Still though, I found myself whipping through all 330 pages of Janice Y.K. Lee’s second novel, The Expatriates, with considerable investment.

While The Expatriates does absolutely tap into familiar tropes of the genre, capturing with aplomb the privilege and trappings of expatriate life mirrored in other novels of its kind — the lavish dinner parties, the affairs, the flora and fauna of a weekend in Phuket (“an expat beginner vacation”) — it also delves into this world of excess through the perspectives of three female characters who, with varying levels of success, weather this microcosm of Lululemon and foreign house help through loss, sex, status and family. Two of the principal characters, Mercy and Margaret, are Asian-American expats in Asia, a fact that adds layers of richness and complication to their narratives and experiences, and makes for a singularly different expat novel than those readers may have encountered previously. There were times when the book seemed to lack for crucial conflict, despite ample opportunity. Noticeably absent also, the lack of authentic response or the one-dimensionality of male character. (Oh, the irony!) There were whole chapters that seemed to beg for Margaret’s husband, Clark, to likewise grieve, fight and breathe on the page. Instead he is the ever-present angel spouse, holding the family together in the midst of disaster. The ending too feels a bit unsatisfactory with its main characters quickly reconciled and redeemed in a hospital room. But to dwell on these things seems contrary to the point. Ultimately The Expatriates is a novel that focuses on the internal life of its women, not necessarily on plot points, and that’s precisely the temperature where it simmers best.

In anticipation of her upcoming reading at the Margaret Mitchell House on January 15 at 7 p.m., I called the critically acclaimed author for an interview two days into the New Year to discuss loss, motherhood and identity. Below is an excerpt of our conversation.

ArtsATL: This book is called The Expatriates, but the characters themselves are on a sliding scale from American expat to something else. How would you define an expat versus an immigrant?

Janice Y.K. Lee: When you immigrate to another country, you do so with the idea of staying for good. The thing about expats is they intend to go home at some point. That very fact is embedded in everything, and is the crucial difference. The pull of home is strong, but the expat can leave. One of the most loaded questions you can ask someone in this circumstance is, “Where are you from? And how long do you plan to stay?”

ArtsATL: I understand that you grew up in Hong Kong, moved to the United States at 15, and then returned to live in Hong Kong as an adult. You said in an interview recently that, “[You] always tell people that [you] are not an expatriate but [you’re] not a local either. I think being between worlds is a good thing for a writer.” Can you unpack that for me a bit?

Lee: When I went back [to Hong Kong] I presented exactly as an expat. I was born and raised in Hong Kong and have family there, but it’s complicated. I have to say, I never felt like a local because I felt like I had to be Chinese to be a true local. I knew the city, I knew how to get around and where I wanted to live, but I was not a local. I think this is good, because being an outsider sharpens your powers of observation. Writers are a small tribe; we’re like anthropologists, some distance is necessary.

ArtsATL: I would argue that Hong Kong is the fourth main character in this book. What would you like readers to take away or consider from their time with your Hong Kong as described in The Expatriates, or your debut novel, The Piano Teacher? Or, for that matter, what does it mean to be in a city where everyone is a self-expressed transient or not from the city? In that way, Hong Kong feels very much like Atlanta.

Lee: Ha! That’s very interesting. I would not have made that connection between the two places. I love Hong Kong. It’s in my bones and in my blood. It’s always there. I want to be there, and I want to not be there. I want readers to take away that these books are a tiny sliver of Hong Kong, and not the whole story. There is an enormous Hong Kong that is Chinese. I think they should realize how complex it is. It’s a world-class city, and it’s also a village.

ArtsATL: Let’s turn to one of the characters in your novel, Margaret, who loses her son, G. If you’re superstitious like I am, writing about the loss of a child when you are a parent, is, in some ways, a taboo. It is asking the unaskable question. How did you put yourself in this head space, or what made you want to explore this kind of loss?

Lee: I began writing the book with an image of a woman lying in bed that would not get up. I had no idea that this [the loss of a child] was going to come out of that image. I did not know that the plot would revolve around that. It’s funny that you mention superstition, because I felt superstitious writing about it, like I was calling this horrible thing into my world. I was spooked and put it away for six months before picking up the manuscript again.

ArtsATL: One of the central questions this novel raises for me is, “What is home?” How do we recognize it, and how do we create it?

Lee: It’s a trite notion, but it’s true — home is where your family is. Home is a mental decision.