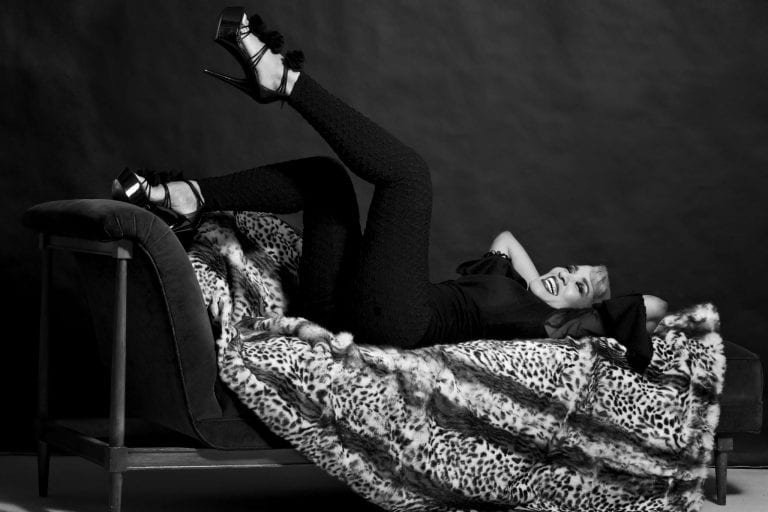 Most people are familiar with Eartha Kitt through her role as Catwoman on the campy Batman television series of the 1960s, one of the most well-known and visible performances of her career. But long before the airing of Batman and long after, Kitt was a beloved singer, author, renowned actress on both stage and screen, and an outspoken activist. Paying tribute to the rich legacy of Eartha Kitt is the mission of jazz singer René Marie, who brings her show I Wanna Be Evil (With Love to Eartha Kitt) to Atlanta’s Spivey Hall on February 12.

“It was the early ’60s, and there were very few roles for black women on TV,” says Marie, who grew up in the small town of Warrenton, Virginia. She says she still vividly recalls her first sight of Kitt on television’s Batman as a little girl. “I was scandalized seeing this black woman dressed in a skin-tight jumpsuit acting evil towards white people. I watched with my mouth wide open, thinking that someone would come in and do something to her. Black people just didn’t talk like that to white people. I lived the first 10 years of my life under Jim Crow laws. Under those laws, black people stepped very carefully around white folks because there was always the threat of being punished for simply acting human. To see Eartha Kitt doing all that was just incredible.”

Marie says she occasionally heard and admired music by Eartha Kitt, but didn’t put the two together until much later when, as an adult, a friend invited her to see one of Kitt’s renowned cabaret performances at New York’s Carlyle Hotel. “I saw her step out on the stage, and I said, ‘Oh, my god, it’s Catwoman!’ I was enthralled watching her in person. I was just blown away.”

Marie says she didn’t have the nerve to go up and say anything after the show, but after Kitt passed away at the age of 80 in 2008, Marie decided to do a tribute album. She began by researching Kitt’s life and career. “She just didn’t hold anything back,” says Marie of what she grew to admire most about Kitt. “She was quite outspoken. She owned her sensuality and her sexuality. I just thought, ‘That’s my kind of woman right there!’ The world needs more women like that. I just wanted to do the same thing.”

Marie covers popular Kitt numbers in the show and on the album of the same name, but the singer says she was determined not to try to sound like Kitt herself. “What a mistake that would be!” she says. “Her sound is inimitable, her style is inimitable. I wanted to capture what was inside of her singing like that. What did it mean to be a black woman in the ’40s and ’50s singing songs like ‘Santa Baby’ and ‘I Wanna Be Evil’ and ‘I’d Rather Be Burned as a Witch’? Those are strong, strong statements.”

Kitt was no stranger to strong statements and controversy, and perhaps not coincidentally, Marie has often found herself treading a parallel path. In 1969, Kitt was invited to a luncheon at the White House by Ladybird Johnson to speak about the problem of juvenile delinquency. “Eartha being Eartha, she brought up the obvious,” says Marie. “She started talking about the impact the Vietnam War was having on the youth she dealt with.” The luncheon infamously ended with Ladybird Johnson in tears, and with Kitt blacklisted, unable to get gigs in the U.S. “How courageous was that, to speak out? Are there singers today in the jazz world who speak up like that? I think the answer is no.”

Marie may say the answer is no, but she herself became the center of a similar media controversy in 2008 when she was invited to sing the National Anthem at Denver mayor John Hickenlooper’s State of the City address. “There are moments in one’s life when you take a stand internally,” she says. “It’s not like there’s an issue going on and you decide to take a stand. It’s a personal thing that happens. You just decide internally: I’m done. Whatever the consequences will be they’ll just have to be.”

At the event, Marie melded the lyrics from what has often been called the “Black National Anthem,” “Lift Every Voice and Sing,” with the tune of the official national anthem. Marie says she was surprised by the resulting media firestorm. As an artist, she says, it seemed fitting to combine the two songs, each by American composers, one written by the descendants of enslaved Africans and the other by slaveholders. “I had grown up singing this song written by people who owned slaves, knowing full well that those lyrics did not apply to me when I learned them at the age of 5 or 6,” she says. “I was living under Jim Crow. It wasn’t the land of the free for me, or for my dad, or for my grandparents. I just said ‘Fuck this. I’m just not doing this anymore.’ It wasn’t my experience.”

Although the incident happened before Marie had decided to do a tribute album to Kitt and before she even began the research, she says Kitt has nonetheless become a point of inspiration in moving forward. “There’s a stubbornness like Eartha,” she says of the similarities between the two of them. “She had to be stubborn because so many people had an agenda for her. It’s still true in the field. People look at you and they want you to follow a certain path and put you in a certain niche. That was done with Eartha, but she fought it tooth and nail. I like to think I do the same thing. I speak up when others in my circle would be silent. I don’t think the purpose of being an artist is seeing how many fans you can keep. I think the purpose of being an artist is to cross the line as many times as possible and not to be afraid of expressing yourself completely in your art.”