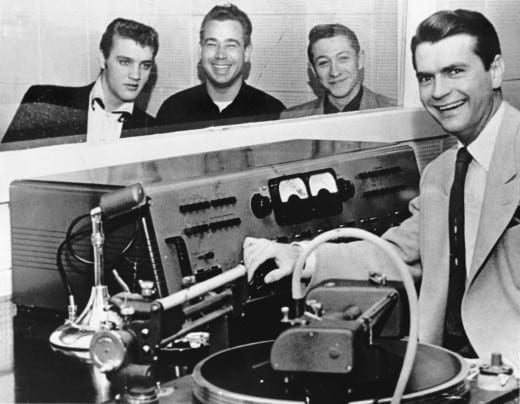 Imagine how crazy life was for Sam Phillips in 1955.

The record producer had just discovered Elvis Presley and was cutting classic hits like “Mystery Train” at his hole-in-the-wall studio in Memphis. As he weighed whether to sell Presley’s contract to raise capital, he was beginning to work with Johnny Cash, Carl Perkins and a slew of other country boys showing up at Sun Records with guitars and twangy dreams of stardom. At the same time, he was launching the nation’s first “all-girls” radio station, WHER, housed in the flagship of the Holiday Inn motel chain, another investment.

All this from a 32-year-old workaholic who had recently suffered a nervous breakdown and been advised by his doctor to slow down.

In Sam Phillips: The Man Who Invented Rock ’n’ Roll, veteran music writer Peter Guralnick tells the story of a young radio engineer from Florence, Alabama, who became one of the founding fathers of American popular culture. Guralnick will be speaking about the book, which will be published next week, on November 12 at the Margaret Mitchell House in Atlanta. He gave us a preview in a conversation from his home outside Boston.

ArtsATL: Let’s start with that subtitle: “The Man Who Invented Rock ’n’ Roll.” Didn’t others play a role? Isn’t that title an overstatement?

Peter Guralnick: It’s a shorthanded way of getting people’s attention, but I think it’s justifiable. Sam had in mind the music that would become rock ’n’ roll from the time he was growing up in Alabama. He envisioned a democratic music that would reach everybody and cut across class and regional boundaries. He wanted to eliminate racial divisions in popular music. That was quite a revolutionary concept.

Look at what Sam did: In 1951, he produced “Rocket 88,” a song often cited as the first true rock ’n’ roll record. Three years later, he produced Elvis Presley’s first recordings, which many people say is where rock ’n’ roll started. Sam recorded them both.

ArtsATL: Most people know about Elvis and Sun. Tell me about “Rocket 88.”

Guralnick: B.B. King, who had done some early recordings with Sam, told his friend Ike Turner that there was this white man in Memphis who was recording artists like them. Ike and his band drove up from Clarksdale, Mississippi, and passed by the Sun studio several times because they thought it looked like a barbershop; it certainly didn’t look like their idea of a recording studio. They were very disappointed because they had busted the speaker cone on their guitar amplifier and thought they were going to have to reschedule the session. Sam heard it and liked the sound. He went next door to a restaurant and got some brown paper and wadded it up inside the speaker, so you hear this buzz going all through the record. Sam thought it was distinctive.

ArtsATL: He had a phrase for what he was trying to do in the studio: “perfect imperfection.” What did he mean by that?

Guralnick: He wanted his records to feel real. He didn’t want them to be perfect. Like other artists, he believed it was the flaw that drew attention to the achievement.

ArtsATL: There’s a famous quote from Phillips about the birth of rock ’n’ roll. His office manager, Marion Keisker, quoted him as saying that if he could find a white man who could sing with the feeling of the black artists he knew and loved, he’d make a billion dollars. What do you say to people who would call that an admission of cultural theft?

Guralnick: Sam believed that some of the black artists he was recording, like Howlin’ Wolf and Little Junior Parker, were going to cross over to a mass audience. It didn’t happen. By 1954, he had hit a kind of ceiling, and the studio was on the verge of bankruptcy. It was then that he formulated the idea of finding a white face who could represent the music he loved — not as someone appropriating it, but as someone who felt it just as deeply. He thought that would open the door for black artists and send the mass market rushing through. And that’s what happened after Elvis, when you had Ray Charles, Little Richard, Chuck Berry and Bo Diddley come to the fore. 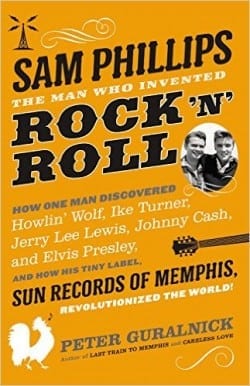 ArtsATL: We used to hear that Presley went to Sun to make a recording for his mother’s birthday. You say it was more calculated than that: that it wasn’t even her birthday and that he had seen an article in the Memphis paper about this man who was recording local talent.

Guralnick: Elvis Presley wanted to be a recording artist. To dismiss him as someone who was at the right place at the right time makes it sound like he was an accident and does a great disservice to him. He wanted to reach a huge audience. That’s why he left Sun for RCA at the end of 1955.

ArtsATL: They didn’t exactly set out to make a rock ’n’ roll record, did they?

Guralnick: What happened in July 1954 was a great example of Sam’s method. When he brought an artist in, he waited for the moment to reveal itself. He’d go to the control panel and do this and that and act like he wasn’t listening, and then he’d hear something and say: That’s it.

Elvis thought of himself as a ballad singer when he walked into Sun. Sam had him run through his entire repertoire: Bing Crosby, Dean Martin, country ballads. It wasn’t until they were taking a break that Elvis started fooling around and singing this blues song, “That’s All Right,” and Sam, who was in the control room, said, “What’s that? Back it up and do it again.” He thought it was something different.

ArtsATL: And he did that same sort of thing with his next big act, Carl Perkins.

Guralnick: Carl had written a song called “Blue Suede Shoes,” and he had a line in there that went: “Go, man, go.” But when they recorded it, he said: “Go, cat, go.” He wanted to redo it because that wasn’t the way he wrote it. He said, “That was a mistake, Mr. Phillips.” But Sam loved it. He said, “That’s what Sun records is: one big inspired mistake.”

ArtsATL: What kind of relationship did he have with Johnny Cash?

Guralnick: With Cash, it was a case of waiting for his inner voice to emerge. Sam recognized that John Cash was a deep person who had a lot of potential. He had enormous regard for him. He molded some of his songs. In the early versions of “Folsom Prison Blues,” Johnny sings it slowly in a plummy tone like Marty Robbins. Sam got him to do it more up tempo with a broader appeal.

ArtsATL: And then Jerry Lee Lewis came into Sun like a hurricane.

Guralnick: Sam said he was the most purely talented of all the artists he ever worked with. When he first heard Jerry Lee play and sing, he told him, “You’re a rich man.” Some of the other artists at Sun came to resent all the time Sam spent working with him.

ArtsATL: Many Sun records have a distinctive echo sound. How did he get that effect?

Guralnick: Other people were doing echoes back then, but Sam’s sounded different. He used two Ampex 350 recorders and played one back on a slight delay, like sound chasing sound. He called it slapback and thought it gave a fullness to the sound and replicated the way people heard music in real settings like a bar. He didn’t use it on everything. You don’t hear slapback on Elvis’ “That’s All Right,” but you hear it slathered all over the flip side, “Blue Moon of Kentucky.” You hear a lot of it on Jerry Lee Lewis.

ArtsATL: Why didn’t Phillips record many black singers after Presley?

Guralnick: When Elvis and Carl Perkins hit it big, there was an onslaught of white artists at Sun that took all of Sam’s attention. He didn’t really know how to delegate. He recorded a few more black artists, but it was a great regret for him that he didn’t record more.

ArtsATL: Was he more comfortable with white singers?

Guralnick: He worked with black and white artists differently. He had a great deal of respect for black artists and was in awe of some of them, like Howlin’ Wolf. His emphasis with them was to make them feel at home in the studio. But I do think he was more comfortable with the white artists because they had grown up in circumstances very much like his. He took on a nurturing role with them.

ArtsATL: Phillips pretty much stopped producing before he turned 40. Why did he make so few records after 1960?

Guralnick: Two things: First, he burned himself out as many creative artists do. He had 10 years of intense activity during the 1950s. The other thing was that he no longer saw a future for Sun. He didn’t think independent labels could make it anymore, and he was right; by the end of the 1960s, virtually every independent had been absorbed by a major recording company.

ArtsATL: You met Phillips in 1979 and had many dealings with him until his death in 2003. You didn’t know your earlier biographical subjects: Elvis Presley and Sam Cooke. Did knowing Phillips make it harder to write about him?

Guralnick: I don’t think so. I always want to tell a story inside out, to write about how a person contends with the world he lives in at the time. I had a ringside seat with Sam. When I first met him, he hadn’t done any interviews to speak of in years. He had a lot to say, and he was so emphatic and inspiring in the way he said it. He had a full beard by then and looked like an Old Testament prophet. In many ways, he was a preacher. Whenever I interviewed him, he’d begin with a preamble that could go on as much as an hour about whatever was on his mind that day. If he wanted to talk about his sixth grade teacher instead of Elvis, that was okay with me, because I wanted to know about his sixth grade teacher too.

ArtsATL: Did you learn anything surprising about Phillips?

Guralnick: Yes, he suffered from anxiety and depression throughout his life. He had electroshock treatments twice, when he was 21 in Birmingham and seven years later in Memphis. This was after he had already begun his recording career. His doctor told him to cut back and take it easy. He learned how to manage his problems without taking that advice, because no one could have taken it less easy than Sam.

A decade of classics recorded at Sun

(Note: Not all these songs appeared on Sun. In the early years, Phillips recorded for other labels.)