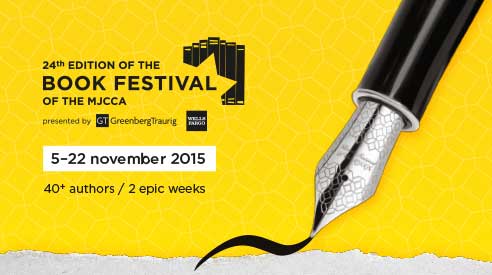 Alan and Arlene Alda are among the headliners at the Atlanta Book Festival.

For more than 20 years, the Marcus Jewish Community Center of Atlanta has gathered the Atlanta community to celebrate the year’s best books. Encompassing more than 40 authors, this year’s Book Festival, which will run from November 5 to 22 at the MJCCA in Dunwoody, will offer talks, conversations between writers and local celebrities, panel discussions and book signings.

The authors and events reflect the interests of the volunteers at the MJCCA, who select the featured authors. The process is a laborious but gratifying task. Beginning in January, festival director Pam Morton and her volunteers search the book world for keynote authors with a focus on providing a range that will appeal to a wide audience. Judy Blume, an author best known for young adult novels such as Are You There God? It’s Me Margaret., will discuss her newest novel for adults, In the Unlikely Event, with Greg Changnon, a former book columnist for The Atlanta Journal-Constitution. Blume’s novel explores three generations of families, friends and strangers, and the way their lives are transformed by unlikely events. November 7 at 8 p.m. Jennifer Teege, a Nigerian-German author will discuss her memoir, My Grandfather Would Have a Shot Me, a poignant exploration of discovery following the realization that her grandfather was the ruthless Nazi and concentration camp commander Amon Goeth (portrayed by Ralph Fiennes in Schindler’s List). Teege will talk about her book with Jasmine Guy, former star of A Different World and current director at the True Colors Theatre Company. November 19 at 7:30 p.m.

Arlene Alda, accompanied by Alan Alda, in conversation with media personality Mara Davis, will discuss her provocative collection of memories in Just Kids From the Bronx. November 15 at 7:30 p.m.

The Rising Literary Voices panel will feature Daniel Torday and Alexis Landau. Torday will discuss his debut novel, The Last Flight of Poxl West, which explores family relationships and what it means to be a hero in the aftermath of war. Landau’s debut novel, The Empire of the Senses, described by Booklist as a “topnotch literary saga with a gripping plotline,” examines life for a Jewish couple in Berlin between the two world wars. November 13 at noon. Archie Rand with his 1,700-square-foot cartoon depiction of the Torah’s 613 commandments.

Also: Visual artist Archie Rand, whom critic Matthew Baigell described as “the most creative and outspoken proponent of a Jewish-themed art in America,” will discuss his work with ArtsATL’s Catherine Fox. November 11 at 12:30 p.m.