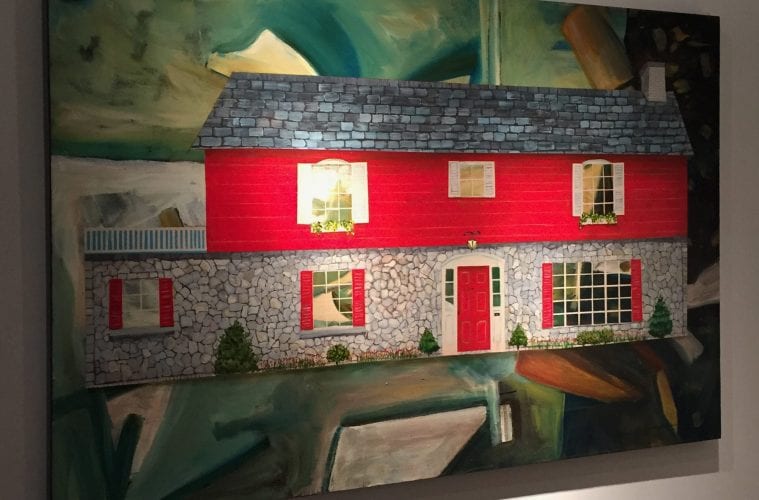 Preview: Larry Jens Anderson brings the past to the present with “The Past is Never the Past”

The wide-eyed, tender grace of Larry Jens Anderson’s gaze shines through in the 35 drawings, paintings and mixed-media canvases currently on exhibit in his solo show titled The Past is Never the Past, through April 12 at Kai Lin Art. But his densely layered expression and subversive themes belie any notion of naïveté, simplicity or innocence. 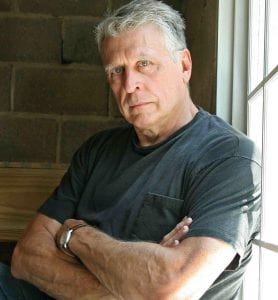 Born and raised in Randall, Kansas (pop. 75), Anderson is the middle of seven children and fraternal twin to his (now deceased) brother Terry. “We were both gay,” recalls the artist on the eve of his opening at Kai Lin, “but there was no name for it while growing up in a tiny, rural town three hours from the nearest airport in the 1950s.”

Anderson, a recently-retired SCAD professor whose work was the subject of a retrospective at MOCA GA last summer, came out as a senior in college. Terry, however, was unable to come to terms with his sexuality until he was well into adulthood. Two months before succumbing to AIDS in 1997, he returned to Randall from his home in San Francisco on a cross country drive and asked his brother to accompany him. The concentrated time alone gave the siblings an opportunity to open up about their interior lives for the first time ever. They were 49 years old.

“Terry told me he instinctively knew mom and dad would be more upset that he was gay because he never fit the stereotype while growing up, whereas I did because I used to play with and sew clothes for my sister’s dolls.” In fact, Terry was so embarrassed by Anderson’s unwillingness to code-switch, that he burned the entire collection of doll clothes while the boys were in junior high.

The revelation made Anderson think about the markers of prepubescent sexuality that parents recognize in their children, worry about and refuse to address. It also forced him to reconsider the notion of identity and complicity on the parts of children.

A lot of gay children, he believes, feel guilty and are very well-behaved because they don’t want to stand out as bad — even if they don’t know they’re gay. Inevitably, he reasons, many gay adults move far away from their hometowns so their families won’t have to deal with the embarrassment.

“Home has been part of my work for a long time,” says Anderson. “We’re made partly by what happens to us. Sometimes, I think artists ignore that part of themselves, but I have a tendency to indulge it.”

There is NO Place Like Home, a 56” x 84” acrylic painting that anchors the show, is a prime example. 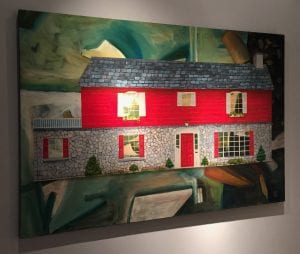 There is NO Place Like Home, acrylic on canvas, 56 x 84. Photo courtesy of artist.

An apt metaphor for the chaos and complexity of family dynamics, the painting began as a vertical depiction of the run down home of Anderson’s beloved Aunt Ruth. But once he grew weary of the image, he switched the canvas’ orientation to a horizontal plane and painted a doll’s house over the dilapidated ruin.

The bright red tones, perfectly rendered brickwork, masonry and roofline and overall symmetry (of the doll’s house) layered over the relatively grim abstraction (of Aunt Ruth’s house) underneath is what intrigued the painter. He refers to the juxtaposition as “perfection on top of decay.” Likewise, the human instinct to color correct the truth and embellish memories is a recurring theme in Anderson’s work.

“I think it’s all about a reflection of his past and how it relates to his life,” offers Yu-Kai Lin, who curated The Past is Never the Past, “and how we interrelate to his experience through the things we carry in our lives.”

The series “Only Dick, No Jane” appropriates the male half of an iconic childhood duo to offer commentary on what it feels like to grow up gay. Though tempered by watercolor blossoms and featuring an unassailable character from mid-century America’s imagination, the harsh depiction of a little boy’s having to hide in plain sight, tolerate the twisted projections of others and endure name-calling and bullying is made clear by titles like Big Pansy, Little Dick and What’s a faggot? 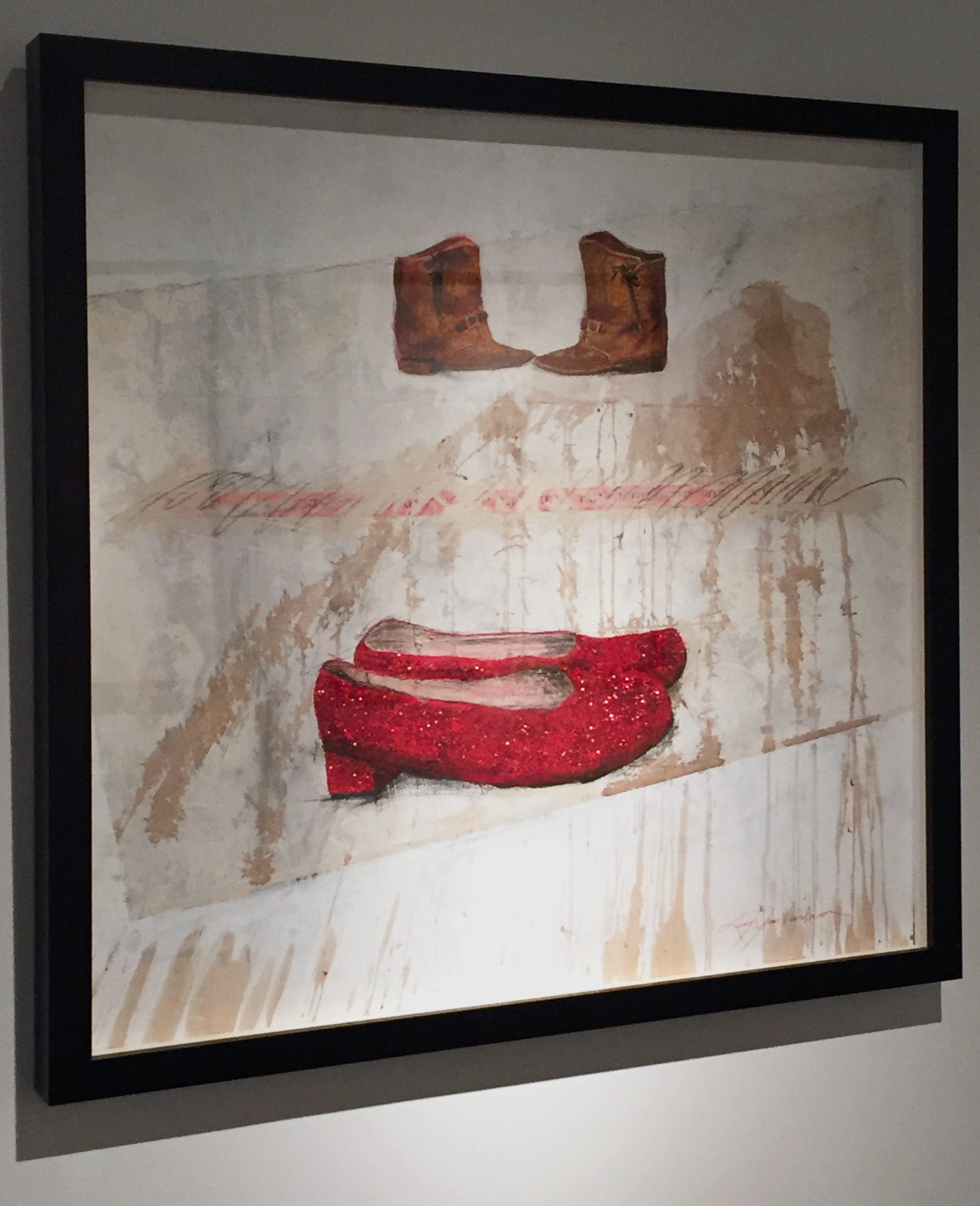 In a more idealized snapshot of childhood, Anderson proffers a wink and a nod in a pair of works on paper titled Before Oz and After Oz. “Kansas is about work boots and ruby slippers,” he explains. “After going to Oz and coming home, Dorothy decides to glitter her boots.” Like anyone who embarks on an epic journey, the heroine returns a little bit changed, but fundamentally herself.

Maxine’s 7, a painting of six baby shoes and a single bare footprint (to represent Terry) encircled by varying pastel auras, was named for Anderson’s mother and addresses the dichotomy of sameness and individuality that exists between siblings. Line drawings like Angry Squirrel and Brown Bear were created for the sheer joy of putting pen to paper. “My greatest passion is drawing” says Anderson. “Like a magician pulling a rabbit out of a hat, I can pull a rabbit out of the paper.” 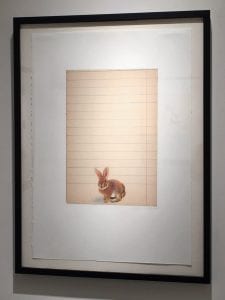 His Baby / Bunny, however, is more homage to a master than sleight of hand. Inspired by Albrecht Dürer, a German Renaissance artist whose painting of a rabbit is frequently reproduced and remarkable for the “thousands of colors used in such a seemingly simple composition,” Anderson calls Baby / Bunny his favorite piece in the show. The rabbit is perched at the base of what appears to be a sheet of tablet paper turned upside down. But closer inspection reveals what is actually a piece of watercolor paper made to resemble lined, composition paper. When asked why he placed the animal where he did, Anderson shrugs, “I thought a kid might want to put him down there so he has more space.”

Play, according to Anderson, is always his impetus for painting. And likely the only path to making impressions that are simultaneously wide-eyed and knowing.