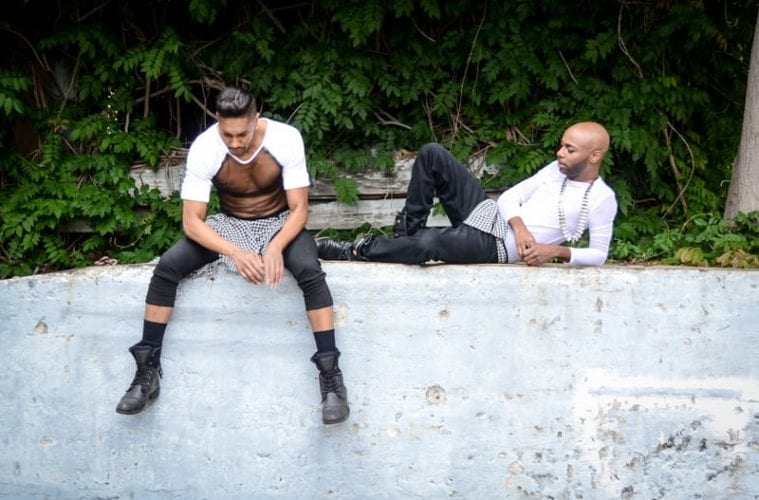 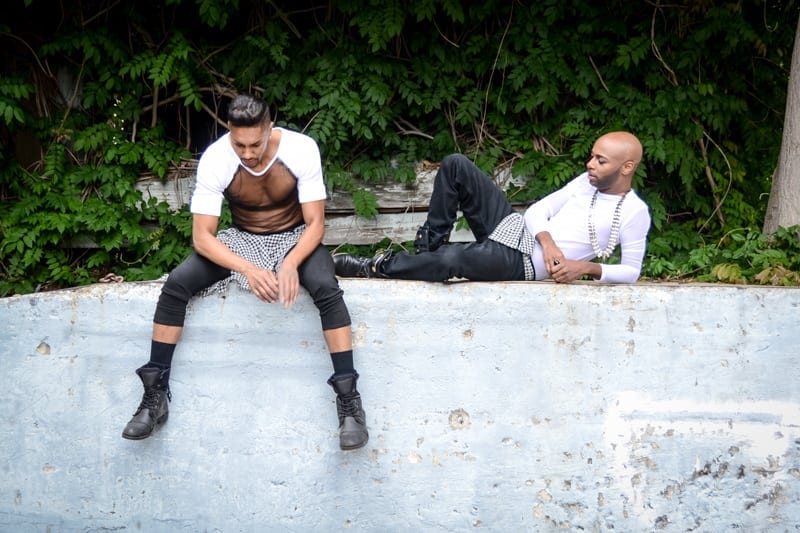 Choreographer, dancer and now filmmaker Juel D. Lane is a storyteller with a dilemma. As a 34-year-old gay African American man, he wants to make art that inspires social change, but he often gravitates toward autobiographical themes that stem from the “human,” not necessarily “gay” or “black,” experience.

In the midst of an eclectic career, Lane will take his second stab at filmmaking with his upcoming dance for camera How to Kill a Ghost, which premieres tonight at 9 p.m. on YouTube. The piece has seen many incarnations since the original, an autobiographical solo entitled The Maestro, premiered at Southwest Arts Center last April.

A few months following its debut, Lane reworked The Maestro for 16 high school seniors at his alma mater, North Carolina School of the Arts. At the time, Lane was dealing with a painful breakup and says the students were “like little branches” that stemmed from his personal experiences. Working with them was both inspiring and therapeutic, he says.

“I was holding on to something that had already evaporated,” he says of the breakup; he was haunted by the memory of love lost. Lane’s best friend referred to the process of letting go as “killing ghosts,” and the metaphor resonated. Thus the title The Maestro morphed into the decidedly darker How to Kill a Ghost, and Lane, supported by the Atlanta-based Idea Capital grant, gave it new life as a solo piece for film.

A self-proclaimed “newbie” at filmmaking, Lane says Instagram ignited his passion for videography. In 2010, he contacted a few friends with experience in cinematography and production, and together they created Just Another Day, Lane’s first dance for camera. “I was bored and having a breakdown,” he says, and film’s unique challenges helped jump-start his creative process. Since its online premiere, Just Another Day has earned considerable recognition and was named “Video of the Month” in Dance Magazine’s October 2010 edition.

In contrast to his first film, which depicts playful, dance-y versions of everyday activities like grocery shopping, the trailer for How to Kill a Ghost reveals a much more abstract, grittier movement vocabulary. Lane says the setting — an urban, graffiti-splattered landscape shot in black and white — depicts the character’s emotional struggles while leaving space for interpretation. “I don’t want a resolution,” Lane says. “I want to leave people with thoughts so they can have their own discussions.” 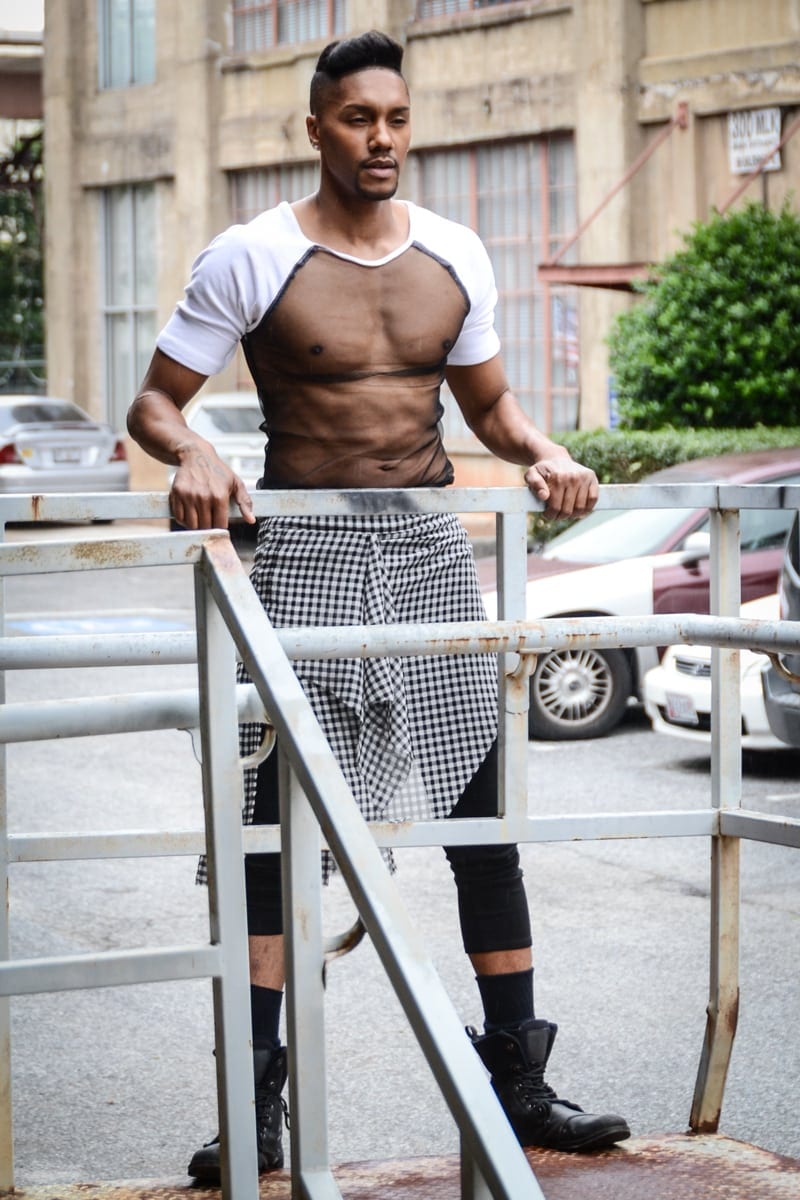 Lane’s work has been performed by Atlanta Ballet.

Despite the film’s sleek, highly polished look, Lane hopes audiences will see “a compelling story.” He says he struggled with the decision to include vocals, hoping they wouldn’t make the film feel like a pop music video. Luckily, Lane’s wide circle of friends includes a number of talented artists, and he turned to them for help. Quentin “EQ” Johnson, who worked with Lane in 2012 on the Atlanta Ballet premiere of Moments of Dis, created the music, and Atlanta-based vocalists RAHBI and Maiesha McQueen sang on the track. Lane was thrilled with the music and says he was inspired to create choreography that held up to it.

In part thanks to Johnson’s crisp, minimalist beat and McQueen’s hypnotic voice, the trailer is intriguing. As the solo figure in an urban wasteland, Lane is the picture of confident street style: a high shock of hair, long arms and legs emphasized in skin-tight black and white clothes. But the choreography reveals unrest, and outbursts of movement are peppered with close-ups of Lane’s face, at times concerned, other times fearful.

Given YouTube’s accessibility, Lane hopes to reach a wide audience and bring contemporary dance to those who don’t or can’t attend live concerts. He speaks of a sense of “duty” and “responsibility” as an African American artist to give back to his community and to be a positive role model for younger generations. As a teacher (often at his alma mater, Tri-Cities High School in Atlanta) he tries to reach out to young black men and create a “safe space” for them to express their frustrations. “I was blessed to have a father who loved and hugged me and showed me affection,” he says. “So many people don’t have that.”

In our interview in early August, Lane talked about the tragic killings of Trayvon Martin and Oscar Grant and asked himself, “What are you going to do?” The answer at the time centered around mentorship and support in his community. But after Michael Brown was killed by a police officer in Ferguson, Missouri, his response reflected a shift toward empowerment through art. In an unprompted email about a week after Brown was shot, Lane wrote, “So many things have transpired in the days since our interview . . . my heart is heavy.” He continued, “As an African American artist, I have a platform to help bring social change. It is our duty as artists not to forget how much power we have.”

Lane is still figuring out how to best express himself as both an individual and a gay black man. “The only thing I can do is stand in my own truths,” he says. In the meantime, he has plenty of inspiration, especially from friend, choreographer and fellow NCSA graduate Camille A. Brown. Lane is a dancer in Brown’s Bessie-nominated Mr. Tol E. Rance, and he calls it “one of the dopest pieces I’ve ever been in.” The work, which raises questions of racial stereotypes through minstrelsy, is presented in three acts and is intended to “turn the mirror” on the audience. Act III is an open-mic question and answer session, a chance for the audience to become part of the conversation about race.

Brown and her dancers did two and half years of research for Mr. Tol E. Rance and worked with dramaturges and community members. The end result, says Lane, “took my whole view of dance and flipped it.”

Acting is yet another one of Lane’s passions, and he hopes to continue to incorporate theatrical elements in his work. In the meantime, he’s focused on film distribution and hopes to submit How to Kill a Ghost for film festivals. “I have so many ideas in my head,” says Lane. “I just want to share them and keep growing.”