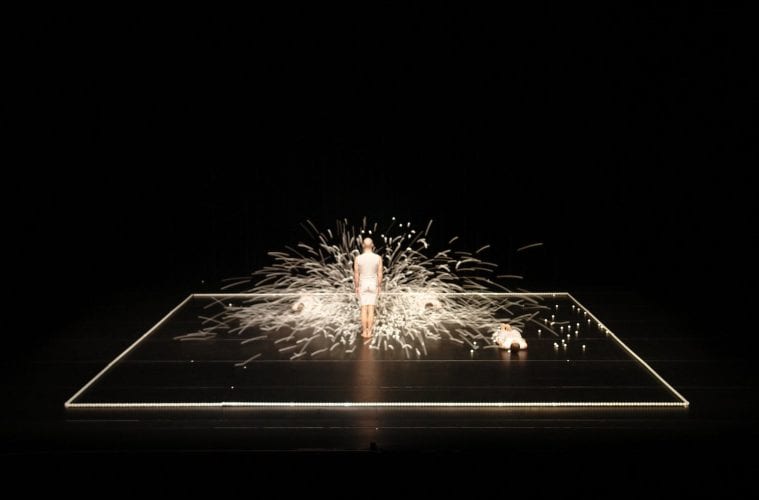 “In any collaboration I like to go all-in and really immerse myself in the collaborator’s work,” says choreographer Jonah Bokaer. His eight-year working history with acclaimed visual artist Daniel Arsham has long given him the opportunity to do just that.

Audiences in Atlanta will have the chance to see two of the pair’s groundbreaking collaborative works at the Ferst Center for the Arts on Saturday, with the performance of the ensemble work Why Patterns and a solo work for Bokaer he created with Arsham, Recess.

Arsham and Bokaer first met in 2006 when Bokaer was a young dancer in Merce Cunningham’s company (in fact, Bokaer was the youngest member in the famed company’s history, having been recruited in 2000 at the unprecedented age of 18). Arsham was in his mid-20s, designing his first scenography for a Cunningham work in Miami.

Though Cunningham himself famously took a very different approach to collaboration (dancers often didn’t see costumes until moments before a premiere or hear the music for the first time until they were onstage), the two artists who met preparing one of his works have been creating intensely and productively together ever since. “With Daniel, it’s really a continual dialogue with each other about how to respond to one another’s work,” says Bokaer. The two artists have continued working together, even as they’ve both become leading voices in their respective fields — Bokaer as an independent dancer/choreographer and Arsham as a visual artist and cofounder of the forward-thinking design firm Snarkitecture.

“The way we work is unusual because ideally the visual ideas are front and center, but they’re also the subject, so the visuals are really the primary motivating force for the choreography.”

“This is one of the most playful and one of the most innovative in terms of how the visuals interact,” says Bokaer of Why Patterns, in which 5,000 Ping-Pong balls descend on to the stage from above the proscenium in a series of three floods. The first “flood” initiates a series of games among the dancers, and there are a set of Arsham-designed visual tricks in the way the “playing field” is rigged.

The performance at Ferst represents the third reconstruction of the work, and Bokaer says he’s always committed to using the original cast of dancers, though this can often involve complications such as bringing dancers over from Europe where the work premiered. “I like revisiting work because I’ve changed and the dancers have changed,” he says. “I find we can get to another layer when we go back. We really try to create a whole universe onstage, so it’s about going back in with more depth or another approach or more coaching maybe.” Recess is a solo work in which Bokaer interacts with Arsham’s simple design: a large white roll of photo paper. “We came up with 20 different landscapes the paper could become,” says Bokaer. “It’s so minimal it’s rather severe. One lone man, an empty space, light and paper. But we achieve these 20 transformations just with that one element and with my body.”

Saturday’s performances are actually just one culminating element of Bokaer’s two years as artist in residence at Georgia Tech, during which time he’s participated in teaching and interacting with various schools and departments, as well as assisting the Ferst Center’s research into a realm that’s been of lifelong interest to him, as well: building audience demand for performing arts.

“As I’ve had more opportunities to show my work in different parts of the country and different parts of the world, I started to understand that when the public comes to see dance there is this very hard expectation of what dance will be and what dance will give them,” he says. “There’s preconceived notions of what dance will be. In my own way I always want to push that envelope a little bit, not in an aggressive way but in terms of innovation. Maybe there are ways of bringing people to dance and they leave the theater with entirely new images of what the body has done, or what the space did. If the public is coming to dance and the imagery that they see changes, their ideas about what might happen onstage changes.”