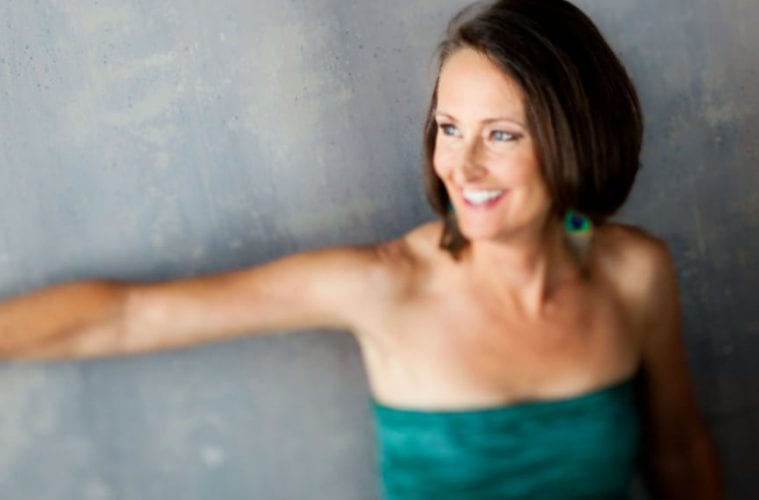 Virginia Schenck will perform Saturday at the Velvet Note in Alpharetta.

On the first track of her debut recording “VA,” over a bouncing bebop beat, Virginia Schenck declares, “Live every minute and put yourself in it.” She isn’t just delivering words; she’s telling part of her own story.

The Florida native came to Georgia after college to work as a music therapist in Macon. There she met Jaimoe, drummer for the Allman Brothers Band, and got her first taste of professional performing when she sat in with his jazz group. She later moved to Atlanta, where she has taught music and vocal improvisation at the Paideia School.

Schenck studied jazz and vocal improvisation with Bobby McFerrin and improv singer Rhiannon. Her first success came in improv, when she created vocal soundscapes for the play “The Gift,” which was staged in New York for the Drama League and at ACT Theatre in Seattle. She also began singing in jazz jam sessions at Twain’s in Decatur and other local clubs.

Newly divorced in 2009 and with her daughter away at college, Schenck made a midlife decision to seriously chase her dream of being a jazz vocalist. She was introduced to well-known local pianist Kevin Bales and they began performing together, an association that led to the release of “VA” last year. It has received airplay at jazz stations in this country and in Asia, Europe and South America.

On Saturday night, the Virginia Schenck Quartet will perform at 7:30 and 9:30 p.m. at the Velvet Note in Alpharetta. ArtsATL spoke with the singer about her new life, her critically acclaimed CD and the healing powers of music.

ArtsATL: Only after raising your daughter and seeing your marriage of 23 years come to an end did you begin your career as a jazz vocalist. How difficult was it to find your voice?

Virginia Schenck: Wow, it has been a process, but I think I’ve always had this in me. I came by music honestly, growing up in a musical family. One of my grandfathers was an accomplished composer and the other was the leader of a bluegrass band. I’ve sung in a choir for as long as I can remember. I studied both classical and jazz in high school. I learned about music being used as therapy in high school, and that led me to earn my degree as a music therapist from Florida State’s School of Music. I remain a music therapist, but that has taken on another dimension now that I’m also a performer.

ArtsATL: Exactly what does one do as a music therapist?

Schenck: A music therapist uses music to address physical, emotional, cognitive and social needs of the individual. Music, when used as therapy, can also benefit family members of the patient. It can help deepen their understanding of their loved one and provide a connecting bridge that would possibly not otherwise be created. Music therapy has been proven especially helpful in teaching individuals who’ve had a hard time using words as a means of expressing themselves. They’re taught to use some form of music to create alternative outlets for their emotions rather than relying on traditional communication with words. Music therapy can be very powerful.

ArtsATL: You said that being a music therapist has taken on a new dimension now that you are also a performer. Can you define that?

ArtsATL: Did you sing in public when you were working as a music therapist?

Schenck: Well, I must credit a dear friend with planting the seeds of encouragement. Right out of college, I moved to Macon for my first job. I used to go to this little bar downtown, the Rookery, after work to listen to music. In the corner of this place, there’d be these incredible musicians playing incredible jazz. I became friends with them, and the drummer encouraged me to sit in with them and sing. I was 23 and it was my first real professional performance before an audience.

ArtsATL: That’s where the seeds were planted. What was the more recent catalyst?

Schenck: In the summer of 2007, I’d just signed my daughter up for camp. I was randomly flipping through a catalog checking out available courses for continuing education — I always need CE credits for my therapist’s license to satisfy the state’s requirements. I began thinking about what would be the best thing I could possibly do for myself for the summer. And there it was: a workshop with Bobby McFerrin, whom I’d always adored. So I signed up for that workshop, and it absolutely blew my ears open in a new way. I got so inspired. It really changed my life. You could definitely call that a pivotal moment. Schenck gets into a number.

ArtsATL: What did you bring back from that?

Schenck: I realized I needed to get back to my jazz roots, and I took action. I became more and more interested in my vocals. I spent a lot of time studying and talking to people. One thing led to another, and awesome things started coming out of it. I met famed jazz vocalist Sheila Jordan. She’s 82 years old and didn’t begin her singing career until she was in her 50s. She filled me with inspiration. I wanted to be like that. The woman doesn’t sit down. She made me want to do something.

ArtsATL: Can you tell us about recording the CD?

Schenck: The CD took just two days to record. It was almost like a live recording. We did two takes on each song. We had 13 and dropped two. It just all seemed to fall right into place. I’m not exactly sure how it’s all happened. It’s still all quite amazing to me.

ArtsATL: Did you pull from the chapters of your own life to select the songs?

Schenck: No doubt. I remember one night I was lying in the bathtub. I was in emotional overload trying to figure out what it is you do with yourself when something is dying. I needed to express how we all have to make compromises with the people we love in life. I wrote the song “Compromise” out of those emotions.

ArtsATL: You have a talented band. Can you tell us who they are?

Schenck: The fabulous Kevin Bales plays piano. Kevin Smith, who is just back from a European tour with Freddie Cole, is on bass. Marlon Patton plays drums. These guys are such truly amazing musicians. They are family.

Schenck: For me, there’s just no music more powerful than jazz. Jazz is America’s music, an amalgamation that encompasses a whole range of things without defining any particular thing. It’s an individual voice within everything. Jazz allows you to have your voice, your say, the way you want it. I love that.