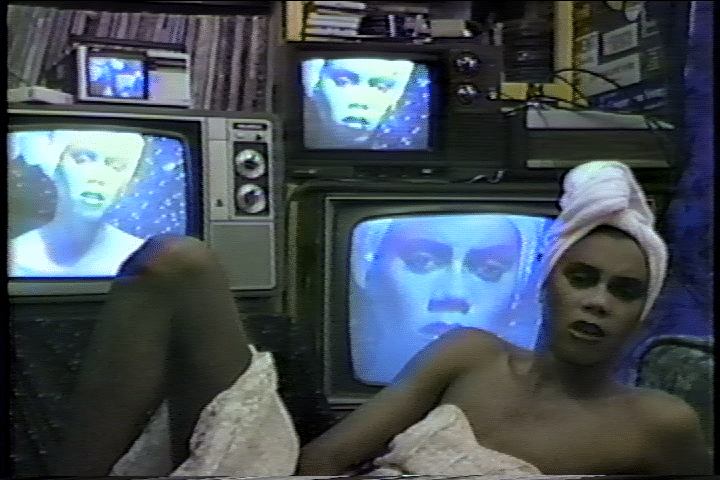 Long before the Beltline and dedicated bike lanes, when the Midtown skyline was mainly still just sky, there existed – circa 1981 to 2005 – an alternate Atlanta. An Atlanta documented in basements and underground nightclubs, broadcast on public access and peopled by such folks as a family of deep-fried Southern singing sisters with voices as loud and misjudged as their makeup, and a gender-bending federal agent named Starbooty.

Atlantans of a certain age may already be familiar with names of performers and/or characters like Wanda and DeaAundra Peek, Duffy Odum and the statuesque glamazon Starbooty, now known to the OTP world as RuPaul. For anyone nostalgic for the weekly adventures of these self-made stars of The American Music Show, or for millennial newcomers to the city with a curiosity about the city’s underground cultural explorers of the late 20th century, you should head over to Inman Park’s Whitespace Gallery on Friday.

Film Love curator Andy Ditzler presents the first in a series celebrating this homegrown Atlanta phenomenon with “How to Live in the City: The Story of The American Music Show.”

“There’s a certain mode of underground Atlanta culture that’s defined by these people and their activities,” Ditzler says. “They were influenced by the television and music they’d grown up with, but when they set up the camera in the basement, they were creating their own form of entertainment that reflected who they were and the kind of fun they wanted to have.” 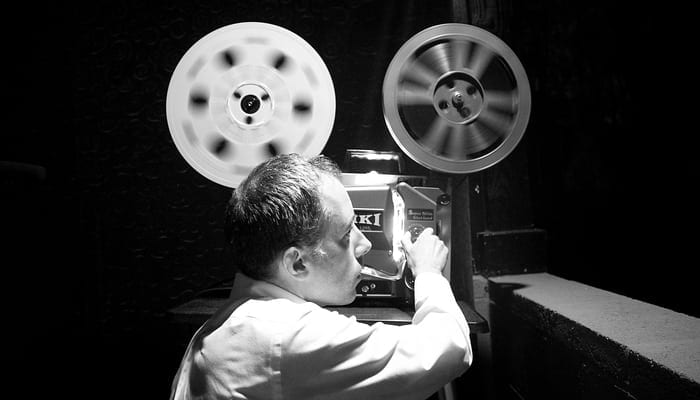 It’s while he was in grad school at Emory that Ditzler, who came to Atlanta in the 1990s, became aware of — well, let’s call it AMS for short. Sorting through the controlled chaos of those tapes and making curatorial sense of them is a labor of love — and sometimes intense, archival logistics.

For starters, the tapes were all labeled. But not chronologically. Instead, some were tagged with descriptions of content. Example: “‘Duffy Odum and Virginia McClendon Sing a Duet,’” Ditzler says. “That’s not a lot to go on. As the first researcher to delve into this collection, I had a couple of wonderful people working with me as interns. And we had to go through all these tapes, look at the labels and decide, ‘OK, what do we look at first?’ That method of working is laborious and slow, but you find you have a much deeper knowledge, because you’ve had to go through all this stuff instead of having a spreadsheet that lays it all out for you.”

What he and his helpers found was a kind of low-rent, uninhibited, alternate-world corollary to longtime mainstream shows like SNL. And, just like that long-running behemoth, some episodes are better than others.

“Some stuff falls flat, because it’s 25 years of programming,” Ditzler says. “But I find that it’s a really rare episode where something doesn’t grab me — although there are some episodes I’m glad I saw but would never want to show.”

Then there are the indelible installments that capture Atlanta history in out-there ways that only AMS could. In January of 1987, for instance, a KKK rally in racially segregated Forsyth County prompted a response by civil rights marchers. Wanda Peek (aka Molli Worthington), one of the Singing Peek Sisters, and RuPaul, in the role of Starbooty, joined the Brotherhood March, in character.

Ditzler likens the blur of fictional characters and factual events with Haskell Wexler’s drama Medium Cool, which unleashed actors into the real-life melee of the 1968 Democratic National Convention. “[Wexler] knew that they were going to have problems there, but he put the characters in,” Ditzler says. “Here you have the exact same idea, only in a comedy setting. And it is a brilliant performance. I look at this stuff, and they’re not only documenting this march, but they’re doing it in a performative way.”

The American Music Show now represents a memorial for parts of Atlanta that are now gone, or changed beyond recognition. “They were taking the camera out to various spaces in Atlanta, into clubs, for example, and into what is now Freedom Parkway,” Ditzler says. “They did location shots before and during the time the highway was being built. So we see a lot of stuff that’s no longer there. These shows archive the city in some ways.”

They also capture long-ago detritus familiar at the time, stapled on telephone poles and taped on club walls.

“In episodes from the eighties, they have decorated sets, and plastered all over the walls are posters for RuPaul’s latest performance, or a Now Explosion flyer,” Ditzler says. Many episodes featured a show-and-tell sequence, with hosts and guests holding up magazine articles and Polaroids to the camera. “You realize, when you’re watching, ‘Oh my gosh, this is a little archive of printed material.’ I may not be able to hold the object, but there the object is.”

Ditzler considers Friday’s event a “soft opening” for the series. Further venues and shows centered on The American Music Show, curated according to themes, will be announced later.