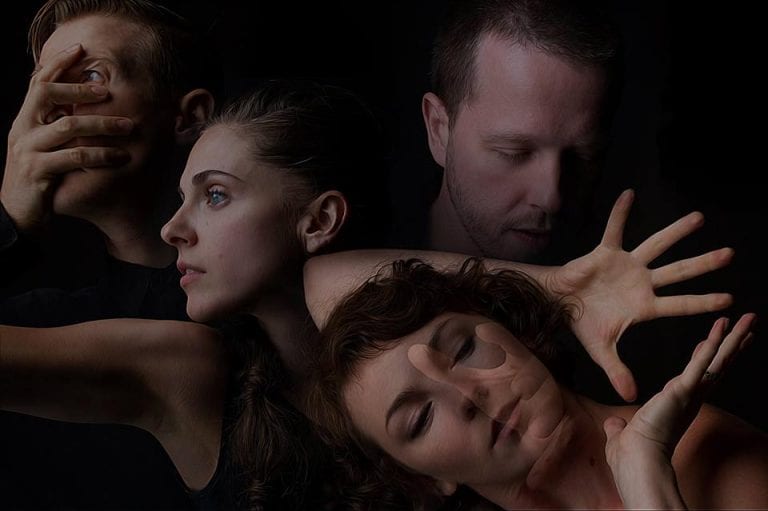 Fly on a Wall has quickly become one of Atlanta's most prominent independent dance troupes. (Photo by Bubba Carr)

In December 1977, audiences gathered at the Forrest Avenue Consortium (which later became Nexus) for an onstage holiday party lit up with drinks and music provided by an opera singer. Throughout the night, small groups were led by a “caretaker” through the hallway, down the stairs to the former elementary school building’s boiler room.

When the door closed behind them, the candlelit room came alive with the sounds of live cello and violin inducing a sense of dreamlike forgetfulness as they noticed the mysterious movers. Two white-clad dancers lying atop the giant boiler began their small gestures in the dim, touching each other’s faces. A gasping moment of light revealed two more dancers inside the boiler slowly articulating this mournful otherworld into the strange air.

Absinthe was a collaborative work created by dancer and choreographer Leslie Morris. Her performance group, the Dance Unit, had its home in Atlanta and was the vehicle through which she realized her vision. The performance was memorable not only for its ethereal and ritualistic world, but also for the unique way that it was viewed by the audience — a handful of people at a time, necessitated by small space.

Last fall, the Dance Committee Initiative at Eyedrum sparked their own Boiler Room. Its name pays homage to Morris’ Absinthe and refers specifically to the performative use of limited space. Eyedrum’s Boiler Room is a curated series of monthly performances on the rooftop of its home on Forsyth Street in downtown. Though the rooftop itself is spacious and panoramic, the actual stage consists of four small squares measuring a total of 16 feet by 32 feet. The committee’s Anicka Austin said that they were interested in identifying the lack of space and using it as a creative platform. “Use what you have,” she says. “Reimagine it, and make it a thing.” The series began in March with performances on the second Friday of every month, beginning at sunset.

The Boiler Room’s next installment (and last of the year) is October 7-9 with performances at 8 p.m. The artists of Fly on a Wall will experiment with movement, collective experience and binaural beats. A binaural beat is an auditory illusion that coerces the brain onto a particular wavelength. Our brains already achieve these wavelengths on their own, generally preceded by the associative behaviors. For instance, the epsilon wave occurs below 0.5 Hz and is frequently achieved in states of deep meditation. The beats are like a sound formula for achieving their frequency. In this way, they can function as a sort of shortcut, getting the brain onto the wavelength without the causative action.

The inaugural performances were highlighted by two solo works by Atlanta artists Grace Thornton and Sarah Freeman. Freeman is a recent graduate from the Emory University dance program and was a resident choreographer at the Work Room before re-locating to New York last month. Her Bandaid on the Loose functioned as an episodic caricature of real-life cult figure Morganna, “the Kissing Bandit.” With effective and rare humor (and a tremendously stuffed bra), Freeman embodied heroic flirtation and nostalgia. A certain comedic romance came from the lipstick housed in her underwear, an adolescent longing from her cartoon kisses and fan girl ecstasy.

Two casually visible stagehands maneuvered the props and costuming, acting like waiters bringing us everything that we needed to see. Though the piece lacked an adhesive momentum to pull us through all the amorous adventures of puppets, practice make-out sessions, and reckoning with womanness, Bandaid remained engaging and hilarious to the end. At that satisfying moment, Freeman donned an adult-sized neon turquoise polyester/spandex mermaid tail and reclined in the cold-water kiddie pool. Meisha Moore’s version of “(You Make Me Feel Like) A Natural Woman” played in the background, giving spotlight to the moment with a lighthearted frame to this feminine archetype. [Full disclosure: MaryGrace Phillips is now a resident choreographer at the Work Room.]

In March, Grace Thornton’s She Was a Visitor took advantage of the evening-end darkness and ferried us into stark, shadowed, breathing sculpture. She wore what appeared to be sheer pantyhose converted into a two-piece body suit. The singular light over-reflected off of her frame to project an immense moving shadow onto the brick wall behind her. She held the direct, fixed gaze of a night creature; her eyes didn’t absorb light so much as they projected it. The movement structure was equally transparent with the task of moving from one prolonged held shape to the next — lunge to wide stance with a choke, plank, repose, an offering, perhaps. Was she waiting for us? Bringing us with her? Thornton embodied a patient, grounded holding that focused the viewer’s sensorial attention, steeped us; the heavy simplicity weighted the imprint of each shape and sound.

In Robert Ashley’s sound, we heard a woman’s voice recount a series of intimate, sexual encounters with a man. With an impressive lack of explicit description, the broken narrative created an echo-like, poetic repetition: “I remember . . .  one time . . .  in my mouth . . . I remember . . . my mouth . . . in my mouth . . .” The words were accompanied by bell-like chimes and what sounded like drops in a wind tunnel made inside an animal’s wide giant dragon mouth. The whole scape gave us a sense of wasteland. “Hollow,” the voice said.

In their Hz, Fly on a Wall will play with how bodies physically respond to these different wavelengths. What happens if an audience can successfully be on the same wavelength as the performers? How does that affect the alchemy of performance and the way we share space? Fly will focus their work on a Mylar-highlighted stage, giving the audience an advantage of multiple perspectives of their real-time, sonically informed movement.

Since the beats can only be accessed fully through headphones, audience members are encouraged to bring headphones so they can listen to the performers’ live track through their mobile devices. For those without this access, there will also be headphones available for rent and other listening stations on the roof.

After the performance, the audience will have the opportunity to fill out a short survey about their reactions to this experiment. The information will help quantify the experience, fueling future research around the physicality of these beats and how they can be translated through dance. Additional programming includes a movement workshop on Saturday, October 8, at 3 p.m. and a panel on Sunday, October 9, at 3 p.m.