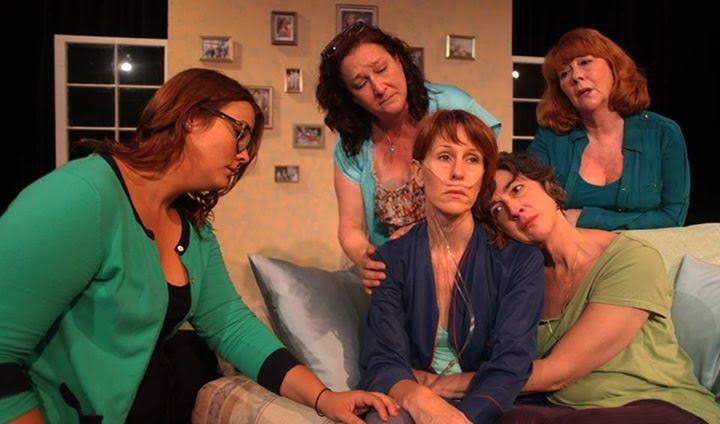 Karla Jennings' Ravens and Seagulls premiered at the 2014 Essential Theatre Festival and was nominated for a Suzi Bass Award for Outstanding World Premiere Production.

What happens to people’s Facebook pages when they die, and who has the right to control that?

A young woman named Lillian is confronted with this question when she visits her recently deceased co-worker’s Facebook page and discovers that he had a crush on her. She messages him and receives a reply, but with whom is she corresponding?

Joshua Mikel’s play Lillian Likes It starts off as a social satire about the way people behave online, but delves further to offer a poignant take on the disconnection between people and their social media personas.

Mikel, 25, is the resident playwright at Endstation Theatre Company in Virginia where he primarily writes plays for young audiences (Good Good Trouble on Bad Bad Island and The Monster Hunters). The Conyers native was commissioned to write Lillian Likes It for a friend who is a theater professor and wanted to give his college students a chance to workshop a play that is relevant to them.

“When we’re on social media we are constantly looking over other people’s fences and seeing other people’s highlight reels,” Mikel said. “We’re all the lab rats of Facebook. Who is the person you portray yourself online and how does that compare with who you are in real life?”

Lillian Likes It will be presented as a part of Essential Theatre’s Play Festival, July 24-August 23 at the West End Performing Arts Center. Now in its 17th year, the plays presented in the festival are the winners of the Essential Theatre Playwriting Award.

Sixty to 80 plays are submitted for festival consideration, and two are chosen after a group of volunteer readers spend eight months weeding through the submissions to pinpoint the most outstanding plays. From there, the winning playwright sits through rehearsals to see how a professional director and actors respond to the work.

“We try to base our decisions on what the strongest plays are,” Peter Hardy, Essential’s artistic director, said. “They don’t have to be about Georgia; we want to encourage the writer.”

The second play that will be presented on the festival’s main stage is The Old Ship of Zion by Natalia Naman. The musical is set in a small black church in Columbus, Georgia, where Mama Gwen is trying to keep on keepin’ on as the church changes, and a young man named Quincy is starting to realize that he is gay. Both of them are searching for a spiritual life and do not want to sacrifice the church as their place of refuge.

“Growing up in Columbus, I fell in love with the black church tradition, particularly the Southern black church,” Naman, 28, said. “I was fascinated by its beauty, power, history and relevance, but I also found myself obsessed with its contradictions and complexities. It has proven to be an inexhaustible area of discovery and intrigue as I’ve meditated on it over the better part of the past decade.”

Naman is from New York, but moved to Columbus when she was 8 years old. She wrote The Old Ship of Zion for her senior thesis at Princeton.

“I’ve had moments, especially when working on this play, when I’ve questioned the relevance of the historically black church in a modern, changing world,” Naman said. “I’ve wondered if small, black churches are even now becoming more of a museum or artifact than a living, breathing entity.”

The Essential Theatre Playwriting Competition is the only contest exclusively dedicated to the work of Georgia playwrights. They are already taking submissions for the 2017 competition, and this year’s winning plays will be performed in repertory.

Past winners include Topher Payne, now one of the hottest young playwrights in America; Larry Larson and Eddie Levi Lee, the duo behind The Waffle Palace, which has been mounted three times at Horizon Theatre and, most recently, Lauren Gunderson’s Silent Sky received an extended run at Theatrical Outfit.

“I hope that we are serving new playwrights and helping them find an audience,” Hardy said. “Many playwrights have gone on to receive professional productions at local and regional theaters.”