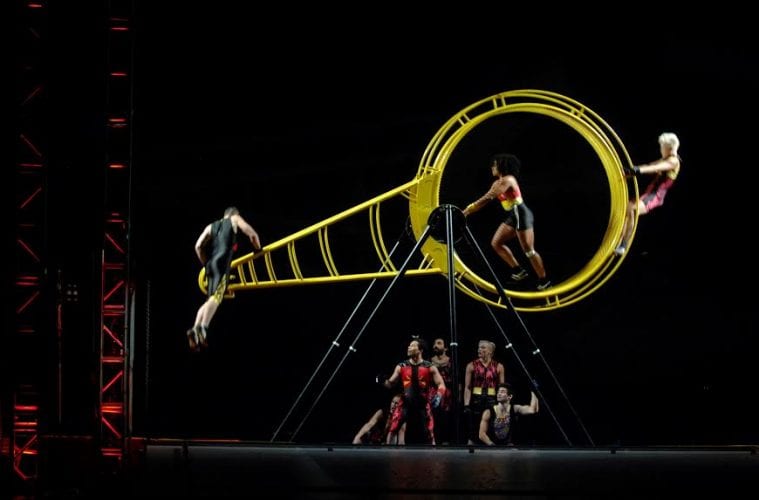 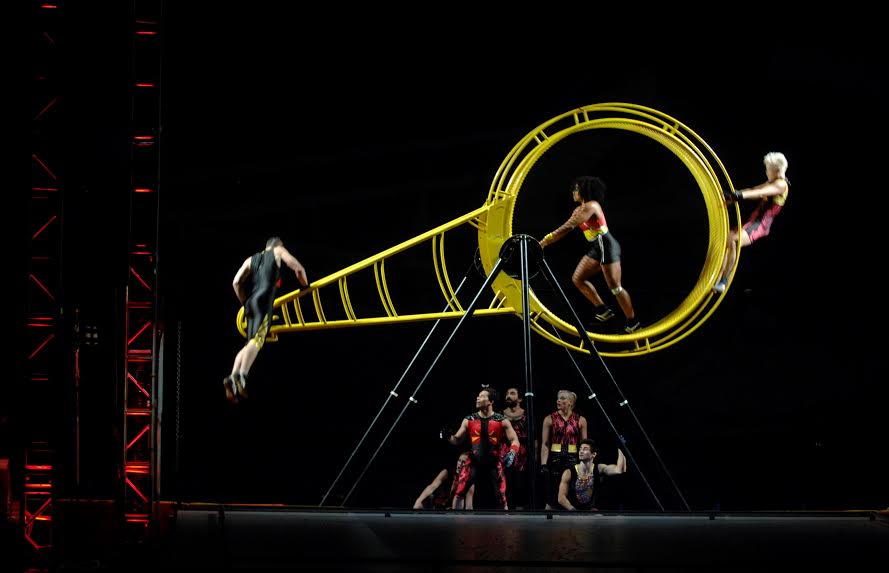 Elizabeth Streb is perhaps best known for her Extreme Action Company’s gravity and death defying feats at the 2012 London Olympics, where her dancers (or action heroes as she calls them) bungee jumped off the Millennium Bridge, leaped from scaffolding in Trafalgar Square, rappelled down City Hall and climbed the spokes of the London Eye like spiders on a web of steel.

“I just want to make the best action show I can before I die,” Streb, 65, said recently on the phone from New York. It’s hard to imagine how she could top her Olympics act, but she continues to push the body’s limits in ways that are both frightening and you-can’t-look-away thrilling.

The STREB Extreme Action Company makes its Atlanta debut at Georgia Tech’s Ferst Center for the Arts on Thursday at 11 a.m. and 7:30 p.m., and Friday at 8 p.m. 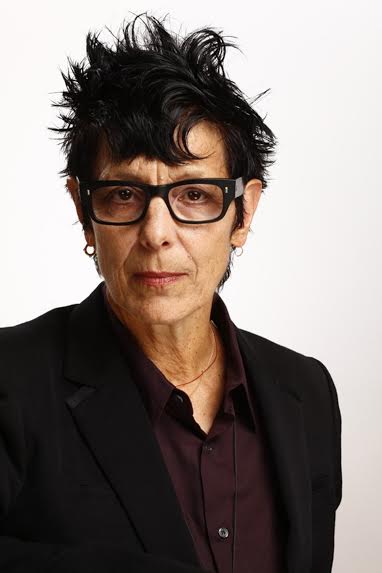 The nine dancers (it’s usually 10, but one of them is injured) will perform Forces, a wild, chaotic work choreographed on and around several large pieces of apparatus, a STREB hallmark.

The dancers run and leap inside a huge hamster wheel; play with an 8-foot-long, 200-pound I-beam — hold your breath as it spins and the dancers duck; climb up and crash into a 30-foot wall; fall hard and flat on a revolving floor; and soar high above the stage on a metal flying machine. They make gravity obvious and give it the finger at the same time. It’s like a fun fair ride gone mad.

“It’s so fast and they are doing absolutely impossible things,” Streb explains. “My rubric is harder, faster, sooner, higher. I apply it to every moment in the show. A magician does sleight of hand; we almost do sleight of body.”

Is this dance? Neither audiences nor critics nor Streb herself — a spiky-haired, dark-suited woman who loves to philosophize and challenge convention — can quite decide. She operates within the dance world but considers herself less a dancer and more “an idiot savant in love with movement.”

Streb started training when she was 17, which is late for a dancer, and never felt at home in studios with mirrors and music. She studied the Humphrey-Weidman and Merce Cunningham techniques, both of which favor abstraction over narrative, but found modern dance timing “very boring.” She studied a lot of ballet and a little tap.

“Dance was a departure point for me,” she says. “But I disagreed with it because it traditionally ignores the only force we have access to — gravity — and pretends it’s not there. It also ignores space and time, and how complex they really are, and what you have to do to contend with them. That’s why I believe (dancers) should be flying and crashing.”

At some of the seemingly most dangerous moments in Forces, the dancers, many trained in both dance and gymnastics, shout out comments. Some are funny in a daredevil kind of way, perhaps inspired by Streb’s love of Buster Keaton and The Three Stooges.

Streb says slapstick comedy interests her because of “the physicality and the absurdity, the accidents and the foolhardiness. I try to harness some of those ideas.” She’s passionate about stunt artists like Evel Knievel and the thrill seekers who climb into barrels and float over Niagara Falls. More than anything, she wants to see a human body fly.

Just getting the company to Atlanta is a feat. STREB travels with 30 tons of equipment and requires a day and a half to load in the sets. The crew drills 60 holes on and around the stage “to keep our things in place. We would tour much more if it was just tights and lights, but then it would not be STREB.”

At the Ferst performances, Zaire Baptiste, STREB’s DJ and MC, will welcome audiences and tell them to ignore the announcements about turning off cell phones. Keep them on, he’ll say. Yell, holler and take photos. “We give audiences permission to behave differently in this kind of show,” says Streb. “We want them to make as much noise as they want.” 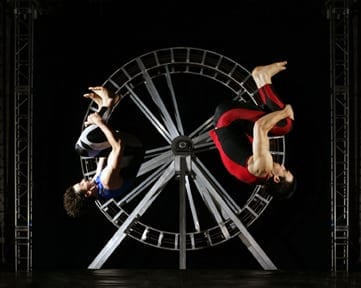 Madison Cario, the new director of Georgia Tech’s Office of the Arts, sees this performance as the beginning of a bigger project and an opportunity to fulfill the university’s new mission of getting science and mathematics students to interact more directly with the arts.

“Streb on this campus represents a lot of different fields including engineering and even gaming,” Cario explained recently. “What Elizabeth does is the ultimate physical game. We’re asking some of our faculty to design a course or senior project around the building of a prototype for her, to create her dream apparatus. That would be an amazing outcome.”

Streb has already sent Cario sketches of her ideas: a huge yo-yo that would pull the dancers up slowly and let them down fast, and an apparatus involving water. (Streb is fascinated with Esther Williams and what she calls cheap water ballet.) “I want to do a piece that deals with reflection, projection, shadows and live (performance) time,” she says. “Then I would choreograph a dance that would confuse the audience so thoroughly that they wouldn’t know what would happen when.”

At the end of our interview, I ask Streb if she would ever go skydiving, an activity that involves three STREB themes — fear, flight and gravity. “No, I wouldn’t do that,” she says. “I consider it a solipsistic act. And I could never utilize that information theatrically because I am wedded to action against architecture.”

She does admit to loving the last scene in Thelma & Louise when Geena Davis and Susan Sarandon drive off the rim of the Grand Canyon. The movie ends with a freeze frame, the women in their old convertible in mid-air — in flight before the fall. “It was extraordinarily profound,” Streb says. “A moment in time. Transcendent. Beautiful. It was great.”