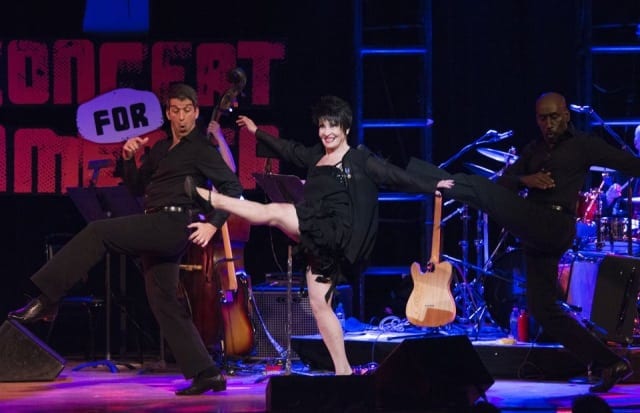 Preview: Concert for America brings Broadway stars together for a progressive cause

Has the state of the world got you in the doldrums? Feeling down? Hopeless? May I suggest a show tune?

Broadway has always projected a spirit of communal, can-do pluckiness in the face of adversity, and the Concert for America — which features Broadway stars performing in support of politically progressive causes — seeks to evoke that spirit in order to inspire viewers to stay positive and engaged during turbulent times. The show arrives in Atlanta on August 28 for one night only at Georgia Tech’s Ferst Center for the Arts.

“After the election, we didn’t know what to do, so we thought: well, the way we’ve always gotten things done is through music,” says Broadway actor, director, musician and SiriusXM radio host Seth Rudetsky, who created Concert for America along with his husband James Wesley.

The first Concert for America happened on Inauguration Day 2017 with a constellation of Broadway stars convening at New York’s Town Hall Auditorium to deliver a hopeful message through song on a day that seemingly had very few hopeful messages to offer. “Everyone was so negative in the press, and we really wanted to cheer people up,” says Rudetsky.

“It’s become a refueling station, a way to stay really positive and unified, and then you have the energy to go out and become an active citizen again,” says Rudetsky. “We’re not in denial about what’s happening, but all the music is very inspiring and exciting.”

In each city, the lineup also includes local performers connected to the region. For the Atlanta concert, audiences will see Atlanta natives Royce Mann (whose poem “White Boy Privilege” became a viral video hit), Nora Schell (from Spamilton), Ryann Redmond (from Bring It On: The Musical) and area students from the international performing arts training institute Broadway Dreams with students from Orbit Arts Academy and Atlanta Workshop Players.

In the end, no matter what brings people there, Rudetsky says he hopes the concerts will leave viewers feeling more positive and more informed about what they can do moving forward. “It’s this joyous event where you feel a part of it,” he says. “You look around and you’re reminded that all of these people believe in civil rights. All these people believe in helping the environment. And then you can go back and do whatever you need to do to save the country.”