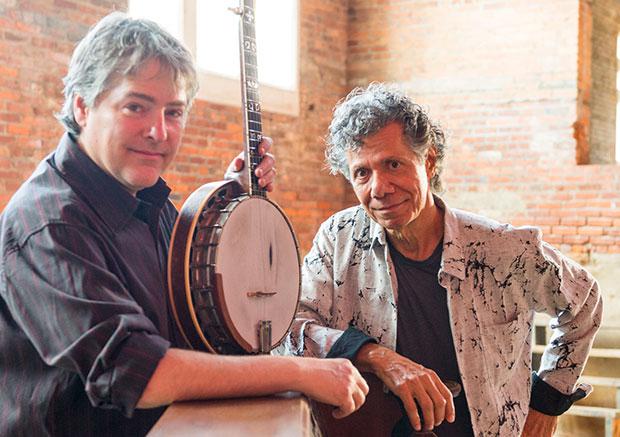 When considering the most naturally sonorous instrumental pairings, the piano and banjo is usually not one of the first couplings that spring to mind. That’s probably because the person doing the considering has not yet heard pianist Chick Corea and banjoist Béla Fleck do their duet thing.

This Saturday, October 3, Corea and Fleck will open the 2015-16 Candler Concert Series with a concert showcasing the duo’s improbably beautiful, largely improvised collaboration in the Schwartz Center for Performing Arts on the Emory University campus.

The performance will be a first for Atlanta audiences, although Corea and Fleck have been officially playing and recording together since 2006. The duo’s 2007 album, The Enchantment, garnered universal praise for its imaginative exploration of unchartered territory with Fleck’s composition, “Spectacle,” receiving a Grammy nomination.

The date at the Schwartz Center, one of the last stops on the duo’s current schedule, will feature well-honed selections from Two, a double-disk release from Concord Jazz culled from the original tour’s best recorded performances. 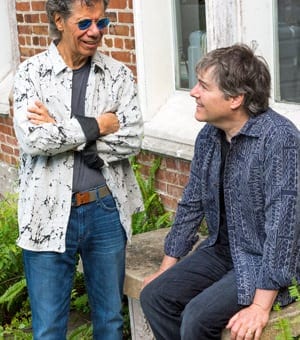 Fleck credits attending a Return to Forever concert at age 17 with inspiring him to venture outside the traditional boundaries of the banjo repertoire. During the next four decades, Fleck altered the evolution of the instrument from its origins in African-American slave culture to the point where a Concerto for Banjo and Symphony Orchestra is a reality (see “The Imposter,” which Fleck composed and recorded with the Nashville Symphony).

Corea says he first became aware of Fleck’s music after a brief social encounter compelled him to check out the Flecktones, the newgrass/jazz fusion group that enjoyed a heyday during the 1990s and which Fleck still occasionally reassembles. “I’d never heard the banjo played that way,” Corea told an interviewer a few years ago. “Now, I’m into it man, I’m into country and bluegrass.”

The remarkable collaboration has yielded a veritable treasure trove of hybrid wonders. From the fingers of the 74-year-old Corea, whose first professional gig was with Cab Calloway, come strong Latin influences including flamenco and tango, traces of dissonance from the avant-garde, and the syncopation and swing of jazz and blues. From the hands of the 57-year-old native New Yorker turned resident Nashvillian named for three classical composers (Béla Bartok, Anton Webern and Leoš Janáček), the listener detects chapters of the American songbook spanning Appalachian hollers and string band shootouts to church services and chamber recitals.

For both musicians, the glue that holds the parts together is the art of improvisation. The abiding allure is the adrenaline rush that comes from stepping onto the stage and not knowing exactly what’s about to happen.

“As the jazz players always say, you can’t understand it until you actually do it,” Fleck said in an interview last year with this reporter. “Playing in a group night in and night out, you understand a lot of things you could never understand by practicing along with a metronome or a piano player.”

Corea tends to dispel the myth of magic mojo often associated with the process, equating improvisation with other aspects of playing music. “It seems natural to immerse oneself in it,” he said in an email exchange this week. “Then a deeper and deeper familiarity with the subject develops. There’s really no mystery to it.”

Fleck has performed in just about every imaginable context and configuration from solo gigs and square dances to symphony orchestras and ad hoc concerts in the African bush. For him, the element of risk and reward is the most compelling attraction to playing with jazz musicians.

“When you’re improvising as much as jazz musicians do, there is a huge leap of faith they take when they walk out onstage without any plans,” he said. “It’s the leap of faith that says, ‘Rather than sitting around working up lots of possibilities, the greatest things will happen out of nowhere,’ and those guys can do it over and over and over.”

As a musician who began studying jazz and classical piano and composition at age four, Corea has woven improvisation as a learned skill into the fabric of his life. For him, it’s not so much an existential construct as an instinctive character trait.

“When I’m just looking and doing and communicating, I find that I instinctively make adjustments and corrections as part of a never-ending process,” he said. “I’m often asked, ‘What do you think about when you’re on stage playing?’ My answer is always simply, ‘Nothing.’”

Listening to the musical conversation between Corea and Fleck as they improvise their way through a recording session or concert playlist is a fascinating experience. Not only does one hear the obvious empathy each artist shares with the other, but the juxtaposition of timbre and tone is so unusual, the ear stays piqued, eagerly awaiting the next melodic invention or harmonic convergence.

“Bela, his music, his banjo and his universe are as vast and infinite as they are unique,” Corea said. “I find trying to orchestrate my piano sounds in and around his musical offerings a very rewarding adventure, and mostly he’s a fun guy to hang out with.”

It’s a safe bet a fun time will be had hanging out with Corea and Fleck this Saturday at Emory’s Schwartz Center.