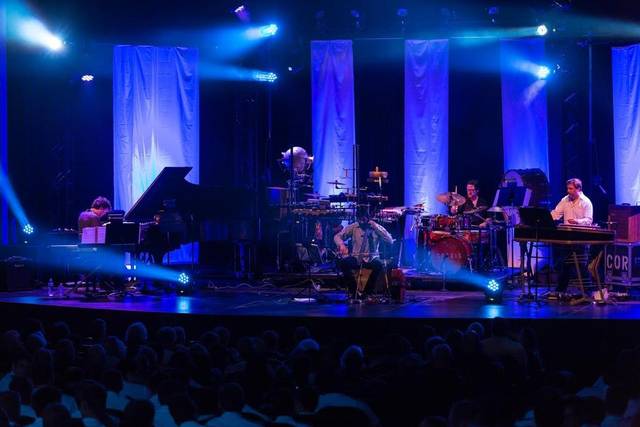 The sound of the Boston-based band cordis is aptly described as “Stravinksy meets Sigur Rós” and the group attracts an eclectic fan base that ranges from rock fans in their twenties to chamber music fans in their seventies.

Band leader and songwriter Richard Grimes plays an electric cimbalom, an obscure instrument from the dulcimer family, which helps gives the group its distinctive sound. Grimes also has significant classical chops, having played with numerous symphony orchestras, including the Atlanta Symphony Orchestra. His bandmates include percussionist Andrew Beall, cellist Jeremy Harman (whose credits include Sting and Lady Gaga and Mary J. Blige) and keyboardist Dan Padgett.

Touring behind a new album, Seams, cordis comes to Smith’s Olde Bar tomorrow night for a performance that takes the group out of the concert hall and into a rock ‘n’ roll bar. In an interview with ArtsATL, Grimes discusses the history of the band, the thrill of playing chamber music in a bar and the differences between playing with a symphony and playing with a group in a rock setting.

ArtsATL: Everyone in the band has a classical background and cordis takes chamber music out of its traditional settings toward an ethereal mood in a very compelling way. You must draw an interesting mix of people in your audience.

Richard Grimes: We do. Younger fans — high school, college, in their twenties — hear the rock side coming out; people in their thirties and forties hear the experimentation; and more mature ears hear the classical side. We recently played a very intimate show at an old country church in Maine and we decided to go acoustic for that environment. The church only held a couple hundred people, and the median age must have been about 75 or 80. I was a little nervous about how it would be received, but it turned out to be an amazing show with an overwhelming response.

ArtsATL: The electric cimbalom is an integral part of your sound. What is a cimbalom and what drew you to such an obscure, but vivid instrument?

Grimes: The concert cimbalom is the national instrument of Hungary. It’s a zither from the same family as the dulcimer — except it is much larger in scope. It has almost five octaves, a sustain pedal and a very big sound. It was invented in the last quarter of the 19th century by a piano maker in Budapest, and championed early on by Igor Stravinsky, among others. I first heard this instrument when I was in college. A woman, Viktória Herencsár, was giving a concert and I happened upon it. When I heard it, I knew that it was going to be an important element in my life at some point. When acoustic, its sound is like a cross between a banjo and a harp. There are many very unique overtones that each note has because of the way its tuning is designed. These overtones make it perfect to have interesting interactions with guitar effects like overdrive, tremolo, etc. In my writing, I use the electric cimbalom as more of a textural presence than a lead voice.

ArtsATL: You’ve performed with an impressive list of orchestras, including the Atlanta Symphony Orchestra. How is the approach and mindset different in terms of playing with a symphony orchestra versus playing this kind of show with cordis?

Grimes: When I’m playing in a more formal concert setting, my approach to the instrument is completely different. The group is much larger, there is a conductor offering direction (Robert Spano is one of my favorite conductors to work with), and the hall is often very large. In order to fill the room and cut through, my tone must be very clear, very big and very full. With cordis, often the room is as large, but my amplification necessitates a lighter touch. My playing and entire feel is so much more nuanced. Larger ensemble projects often involve writing that is not ideal for the instrument. Stravinsky actually owned a cimbalom and wrote at it, so his writing is perfect for it. Many others — who shall go unnamed — clearly did not do this approach, so the idiomatic style for the instrument is abandoned, which necessitates a lot more work on the player’s end of things.

ArtsATL: You’re performing mostly in theaters and auditoriums on this tour. In Atlanta, you’re playing at Smith’s Olde Bar, a music room that usually hosts loud rock ‘n’ roll bands. How different an experience is it for a classically trained musician to play in a room where they’re selling beer at the bar?

Grimes: Every member of cordis has been in rock bands that played these very clubs. We chose to play at Smith’s Olde Bar because they know what they’re doing, they have a great space, and they like to break new artists with something different to say. Remember we have amplifiers, so if things get loud, we are prepared to play ball. If they put up chicken wire around us, well, that may be a different story. But seriously, they’re good people and it will be a great show. A rare chance to see the group in an intimate setting.

ArtsATL: What is your composing process? Do you imagine and compose the parts for each instrument in a traditional classical approach, or is it more of a jazz approach where the others in the band come up with their own parts in reaction to the main themes you’ve composed?

Grimes: It all starts as a very composed thing. After a piece is written on music software (and heard through sequencers), we record a demo of it to see how it sounds with actual instruments. Parts are revised during and after that phase. Then we tour with it for a year or two and continue to evolve it. If it still works for us artistically after all of that, we track it for consideration on an album. The piece continues to evolve, but after the album tracking, there is a definitive version.

ArtsATL: You’ve just released a new CD, Seams, that seems to take the group deeper into the experimental. What were you looking for when you went into the studio to record?

Grimes: I wanted to explore the idea of allowing motives to open up over time. I’ve historically been uncomfortable letting a hook repeat and trusting it to evolve on a timbral level — but Sam Kassirer, our producer on Seams, put the challenge to me. He asked me to trust the strength of the hook, and to be patient with it. That approach yielded some great results, and has since opened up the way I compose to an extent. As rebreeding as that approach was, I wanted to counter it with an effort to see how efficient I could be in my writing. As you might imagine, that approach resulted in much shorter pieces. This album is much more of a crystallized presentation of the group — with me restricting my playing to the cimbalom and a smaller ensemble. However, the experimentation with different instruments and unique performance approaches is something that carries over from the first album.