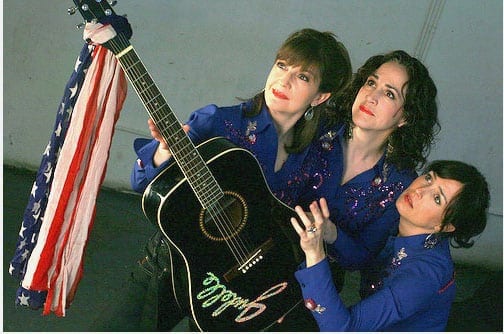 The Chalks grew out of sketch comedy into a full-blown production at the Alliance.

As someone who keeps her eyes open for new talent, Susan Booth, artistic director of the Alliance Theatre, was giddy when she first heard about the singing country and western Chalk sisters. A folk and country music geek herself — “nothing makes me happier than guitar and fiddle music” — Booth learned about the fictional “sisters” from New York colleague Jeff Waxman, with whom she collaborated on “Woody Guthrie’s American Song” at the Alliance during her first season. “[He] had worked with them and had a sense that I’d like them,” she says. “He knows both my taste in music and my sense of humor. [The sisters] sent me one of the funniest and sassiest letters of introduction I’d ever received, and once I heard their song ‘Mud Flap Mama,’ I was hooked.”

Mary Brienza, Kathryn Markey and Leenya Rideout are the country trio in the new musical spoof “Holidays With the Chalks,” running November 30 through December 23 on the Alliance Theatre’s Hertz Stage and directed by Booth. While other versions of the Chalk story have played various theaters, clubs and arenas in and around New York, this holiday take is a world premiere.

“Holidays With the Chalks” turns the normally prestigious Hertz Stage into a honky tonk, with the dysfunctional “sisters” performing their “greatest hits” while sharing life stories full of country music-flavored heartbreak. Brienza is Judeen, trying to staying ahead of the law; Markey is Judelle, trying to remain sober; and Rideout is Belva, trying to keep her mind off men.

The Chalks contacted Booth in the fall of 2010 with an idea of creating a holiday show. Booth had already programmed her 2011-12 season, so this year was the first chance to make it happen.

Although there is some audience interaction, it’s a scripted production. “The script has been developed collaboratively and the Chalks have been terrific about welcoming input, and humoring some of my lamer suggestions with grace and good humor,” says Booth.

Brienza and Markey started working together nearly 18 years ago. Each had written and performed a one-person show featuring a variety of characters, and a mutual friend brought them together in a writers’ group, where they began to create new material.

“At some point we came up with the idea of country music sisters. There was something about musical families that was intriguing in and of itself, added to the naturally comic relationship that country artists have with their fans,” Brienza explains. “We decided to make these characters famous, and that combination of sincerity and self-involvement made them particularly ripe for parody.”

After debuting the Chalks with a few songs as part of a larger evening of sketch comedy, they began to expand their story and repertoire. “We started to play at open mikes and in guitar bars in New York and eventually wrote enough songs and material to start playing out as a band,” Brienza says. Rideout played with the two a few times as part of the backup band, and when one of the original collaborators moved on, she came aboard as a Chalk eight years ago. The three have been writing and performing together ever since.

They’ve created personas for each sister, as well as a Chalks website and an entire history. Performers from a young age with the Christian Music Caravan, the Chalk sisters moved from Boggy Depot, Oklahoma to Nashville after growing up — and after Judeen was involved in a scandalous affair with her minister of music. After years of touring, the trio landed in Atlanta this fall and were arrested after accidentally burning down Tubby’s Bar and Grill. (Judelle tried to set her microphone aflame and twirl it, but instead set fire to the establishment.) They’ve been on a 90-day bus arrest since, but the shackles come off on opening night at the Alliance.

All three actresses have extensive New York theater experience apart from the Chalks. Rideout appeared on Broadway in revivals of “Cabaret” and “Company” and at Lincoln Center in “War Horse,” while Markey is a Broadway veteran with “3 From Broadway.” Besides acting and singing, Brienza is a teacher and choreographer at New York’s High School for Performing Arts.

Booth has no doubt the “sisters” will fit in fine with local audiences. “Atlanta’s always struck me as this cultural mash-up of intellectual sophistication and down-home values, and the Chalks have that blend in their DNA,” she says. “It’s kind of like Rachel Maddow meets the Judds. How could you not put that on your stage if you had a chance?”