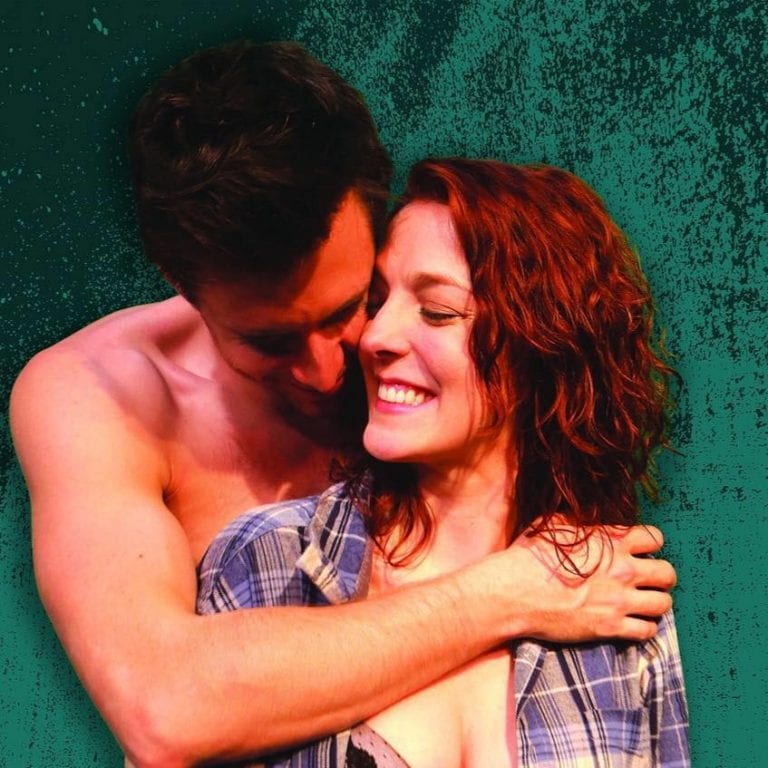 When Megan Hayes returns to the Horizon Theatre to star in Sex With Strangers (through May 1), the career milestone will mark her homecoming as an Atlantan and artist.

“It’s great to be back,” says the actress, as she takes in the vibrant scene along Howell Mill Road from the patio of Octane Coffee. “It’s like coming home, physically and emotionally, because my family’s here and my theater family’s here too.”

A six-time veteran of past Horizon productions, Hayes — who now lives in Los Angeles — is an alumnae of the Alliance Theatre, Georgia Shakespeare Theatre and Jewish Theatre of the South. Hayes is also a budding playwright whose work Unnecessary Monsters — an anti-bullying play produced by the Aurora Theatre — received a 2013 Suzi Bass Award for Youth Production.

Her on-camera career took off when she was cast as the Morphling From District Six (the character that saves Peeta from a marauding baboon) in The Hunger Games: Catching Fire in 2013. Job perks of appearing in the blockbuster franchise included getting to shoot in Hawaii for a month and experiencing the camaraderie among cast and crew who she describes as “so kind and supportive.”

But whether waiting around between takes on location, or acting on stage without a safety net, Hayes likens performing to “Christmas morning” and says she loves it more than anything in the world.

Rehearsing for Sex with Strangers has been no different. The comedy centers on Olivia, a gifted but obscure novelist, and Ethan, a bad boy blogger-turned-literary sensation. When the pair are snowbound in a secluded cabin, opposites attract. But their chemistry cools once the mismatched pair are forced to reconcile their vastly different views on fame, cyber identity and ambition.

The two-person play — which contains strong language and adult situations — runs approximately two hours, including intermission, and features very dense dialogue. Though the challenge of having to memorize a 108-page script for the role was daunting, Hayes says she was undeterred. “Basically, if anything terrifies me I’m always drawn to it,” she says. The actress credits co-artistic directors at the Horizon, Lisa and Jeff Adler, with forcing her to stretch as an artist into the role. “They always see beyond what I think is possible and, with total assuredness, take me out of my comfort zone in the best way possible.”

Olivia, a multi-layered character, is highly intelligent, creative, grounded and defies stereotypes — all of which appealed to Hayes. “It’s so rare that a woman over 30 gets to play somebody who is not desperate, sad or lonely,” she says. “Instead, I get to play a smart woman who’s funny, attractive and not trying to find a man.”

By the same token, Olivia struggles to find a balance between her dual need for recognition and deep-seated desire to self-protect after authoring a book that failed to receive the critical acclaim she anticipated. “Olivia is me three years ago, though a little bit more of a train wreck,” laughs Hayes. “She has a lot of fears about putting herself out there artistically, which is a very scary place to be.”

Hayes says that bringing authenticity to such a role can be terrifying, and that playing the part requires a depth of vulnerability that she did not possess three years ago.

Hayes’ path to self-discovery, which informs her acting in the play, began on the eve of her 30th birthday when her father left a voicemail that changed her life. “Megan, this is dad,” began the message in his unmistakable Alabama drawl. “I wanted to let you know that while we were married, your mother was a royal slut and I’m gonna need you to take a DNA test ‘cause I don’t think you’re mine. Oh, and happy birthday!”

A revered Southern Baptist minister, world-renowned theologian, Fulbright scholar and Princeton graduate who could read in 12 languages, Hayes’ dad suffered from unmedicated schizophrenia and was physically abusive. Hayes, who “passed” the DNA test, learned to cope with the family dysfunction by suppressing her feelings.

Adaptability and a willingness to live with repressed emotions, Hayes says, is typical of Southerners, women and actors, so she never saw it as a liability until she started to work on her emotional health. “You get so good at pretending that nothing is happening, you start to believe yourself that nothing’s happening and then you convince yourself that nothing ever happened,” she says. “And then you forget all about it … until you wake up in February 2013, a grown woman, flooded with memories.”

Hayes talked openly about those memories in her first foray as a storyteller for Risk, a podcast hosted by Kevin Allison and Beowulf Jones that asks guests to tell the kinds of personal stories they might only tell a therapist. Hayes’ inaugural effort before a live audience (fast-forward to the six-minute mark to hear her segment) was such a success that she was invited back to record a holiday show for 2016.

In hindsight, Hayes says the risk of telling the story she dared not tell before was well worth the reward. And the irony of finding her voice by confronting everything she’d spent her entire life trying to escape is not lost on her.

The pivotal lesson was liberating and revelatory, she says, and an apt metaphor for the value of remembering from whence we come. Hayes says that no matter where she lives, she will always be distinctly Southern.

“Acting school beat my Southern accent out of me,” says Hayes, who acknowledges that a neutral accent is best for show business. “But I love being Southern. And believe me, if you hung out with me long enough my accent would fly out at the most unexpected times … like when I’m speaking to my mom, if I get angry or if things get heated. And I’ll never stop saying ‘y’all.'”