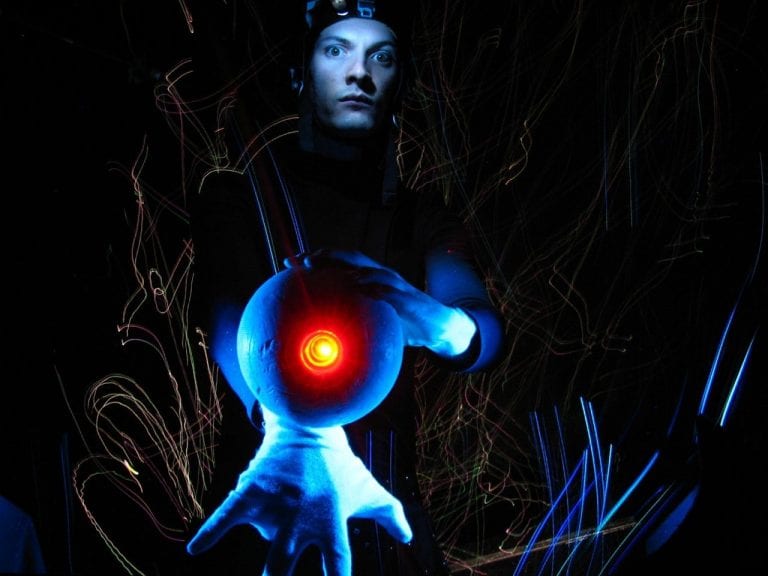 Puppeteer Tim Watts had no expectation his show would be an international hit. (Photo by Michelle Robin Anderson)

It’s hard to know how to best describe “The Adventures of Alvin Sputnik: Deep Sea Explorer.” It’s been called a one-man micro-epic. A Pixar film onstage. A puppet show about the end of the world. A universal story about grief and loss. A fringe performance that’s become an unlikely international hit.

It’s all of those things, and it’s also the vision of Australian actor and artist Tim Watts, who is bringing the show to Atlanta’s Center for Puppetry Arts for three performances, April 26-28.

The 45-minute production uses a combination of puppetry and animation to tell the story of Alvin Sputnik, a deep-sea diver searching for his lost love in a post-apocalyptic world. The show, which was created four years ago for a short run in a small theater in Watts’ hometown of Perth, has become an unexpected sensation.

“A week doesn’t go by where I don’t get an email from someone from Norway or Singapore or Israel or somewhere in the world that has heard about the show and would like to inquire about having it at their theater or as part of their festival,” Watts says. “It’s gotten to the point I don’t have time to do them all. I’m amazed that people can be so taken and moved and delighted by just my hand and a piece of foam.”

Watts became interested in puppetry when the director of a conventional show he was acting in decided to use a puppet for a big, emotional scene. “All the problematic melodrama that had been plaguing the scene went out the window,” he recalls. “It was funny and sad. It was just a much more interesting scene.” It ignited his fascination: how could a puppet successfully do a scene that actors couldn’t manage to get right on their own?

He participated in several puppetry workshops but mostly taught himself the art of building puppets. He built all the props and sets for “Alvin Sputnik” in his garage with the help of his father. It was a hit in Perth and, after taking it on the road a bit in Australia, Watts brought it to the New York Fringe Festival, where it received a great endorsement from The New York Times and played to sold-out crowds. Word spread quickly, and Watts has been traveling with Alvin around the globe ever since.

Fortunately, the show is an easy one to take on the road. “It’s just me operating everything,” Watts explains. All the lights are activated by foot switches, and the sound and animation are run by a computer that Watts operates with a repurposed Nintendo Wii device. “I’m the juggler that’s keeping all the balls up in the air,” he says. “The story is about one man’s journey through the depths of the ocean, and I liked the parallel of the performer being all alone onstage. It just seemed to make sense, and it forced it to stay simple. When it’s just you onstage, the game is really just between you and the audience. That’s really important for the show.”

Although “Sputnik” was originally intended for adults, there are no swear words or sex scenes or violence that would make it unsuitable for children. The fact that the show works well for children has become a bit of a Catch-22: Watts has often had to battle the tendency of organizers to program it as a children’s show. “It’s not that it doesn’t work as a kids’ show,” he says. “But in the first 10 minutes a character dies, and the rest of the show is about grief. So different ages get different things out of it. We generally say 12-plus.” Audiences that typically go for fringe-style theater and animation, he says, are ideal.

No matter the age of the viewer, Watts says it’s ultimately the show’s ability to engage an audience’s imagination that has led to its success. “When an audience has to be more actively involved in the pretending, there’s a lot more work they have to do,” he says. “When you’re really imaginatively involved in what’s going on, the emotion stuff comes in from the side and takes you by surprise. All of a sudden you really care about whether this thing lives or dies. I’m just fascinated by the power of the human imagination.”

“Sputnik” has become such a success that Watts is in the process of training another puppeteer to perform it. The first shows without his presence will take place in Singapore in May. “It will be like this phantom limb somewhere else in the world, like when a twin feels their other twin has bumped their head or something like that. I’m still just amazed and overwhelmed by how much people like it. It’s a simple, humble show that I made just because I thought I would like to do it.”