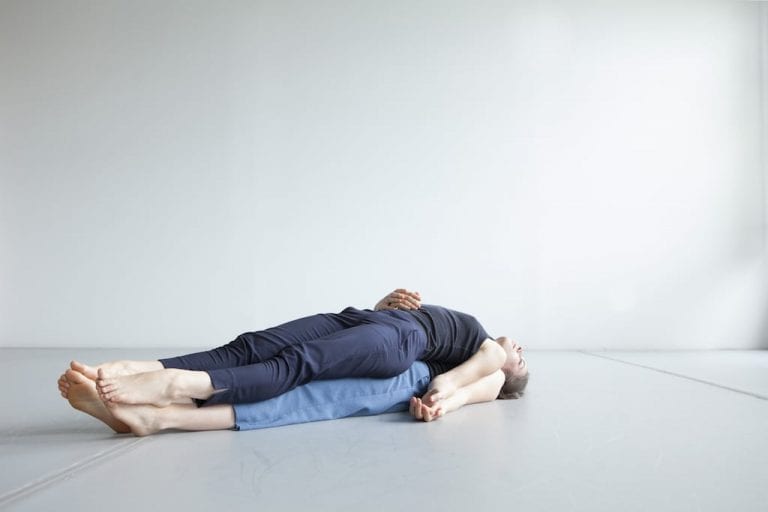 It’s been a year since The Lucky Penny opened the Work Room. The dance studio was born of choreographer Blake Beckham’s determination to fill a practical need she had for nearly 15 years — a space devoted to dance so that she and other independent choreographers wouldn’t have to worry about where and when they would hold their next rehearsal.

With help from the Robert Rauschenberg SEED grant program, Lucky Penny co-director Malina Rodriguez, and community supporters, Beckham has built out a beautiful, sunlit studio. She has also created a community of like-minded, independent artists who have infused the city’s dance scene with fresh, well-wrought and original works.

Evidence appeared a few weeks ago with Heads Up! — a showcase of pieces by nine Work Room resident artists. Emory University’s Dance Studio at the Schwartz Center for Performing Arts buzzed with energy as each piece reflected deep commitment to discover and develop authentic voices.

A year in the making, Beckham said OneAnother is a dance that considers twos: pairs, dualities, the intimate gestures that bind us, and the deeply felt urge to seek out match, mate and mirror. It examines “the fragile and intimate gestures that bind us. How we join and leave, yoke and sever; the possibilities and contradictions of how we treat one another in the face of polarizing drives: the need for another; the fear of the other.”

One recent early evening, Beckham rehearsed with five dancers in a sunlit, second-floor studio at Wagon Works, an old wagon factory turned office complex that stands just over the tracks from the East Point MARTA station. It is the headquarters of The Lucky Penny.

During one section, the score by Blake Williams filled the air with ethereal sounds as dancer Melissa Word moved through an almost surreal solo. She wound around the space, turning, rising and descending into the floor, her arm and hand gestures spiraling around her body like filigree. Two other dancers came into view; they saw each other, then pulled away. Other dancers folded into embraces, arms and bodies intertwined. The feeling was intimate and tender, conveying the thought that relationships can’t be seen in terms of black and white; they are intricate shades of gray, complicated and ever-changing.

OneAnother is not grounded in narrative, nor does it have a literal message, Beckham said after rehearsal. “What dance can do so powerfully is stir the memory and knowledge that lives in the body, and connect the world of images and ideas to this container that we inhabit.”

The idea for the piece sprang from Dearly Departures, Beckham’s meditation on leaving and loss which The Lucky Penny produced in 2014. The work’s main set component was a split-flap display board similar to those used in train stations and airports during the second half of the 20th century.

OneAnother is inspired in part by a single unit of the split-flap display board. Inside the Rolodex-style unit, two cards open to form a diptych — the upper card shows the top half of the symbol; the lower card shows the bottom half. The Rolodex’s circular motion suggests the idea of “parting and pairing that happens continuously on a cycle,” Beckham said. The two halves must join together in order to make meaning.

As Beckham began to translate that duality through dance, she pondered whether she could present two dances to two audiences at the same time and in the same room. She explored that idea last year with sculptor Dana Haugaard at the Emory University Visual Arts Gallery. They set up two small stages and framed by Haugaard’s sculpture and mirrored panels, performed two independent dances.

Beckham will collaborate with Haugaard and two other artists to use mirrored surfaces on the stage space for OneAnother. The mirrors will allow the audience to experience the work from different visual perspectives. “One of the things that’s interesting to me about the mirror is — it divides as well as multiplies,” Beckham said. “It creates a fragmented form as much as it introduces a kind of symmetry.”

The square black box theater will be transformed into a light, rectangular space, similar to the Work Room rehearsal space. Designers will introduce walls to shape the space into an illuminated corridor with the audience seated at both ends.

A cast of five, rather than an even four, created the tension Beckham was looking for. “There’s always one person who’s kind of drifting, or seeking out the other, without success or conclusion,” she said.

Beckham doesn’t see the encounters as an expression of romantic love; rather, this is a work about many kinds of human bonds. “We’ve been examining how you bind yourself to another, how you join, how you meet somebody where they’re at, or impose, or initiate; how we cope with one another, how we cope with the vulnerability of meeting and seeking each other out.”