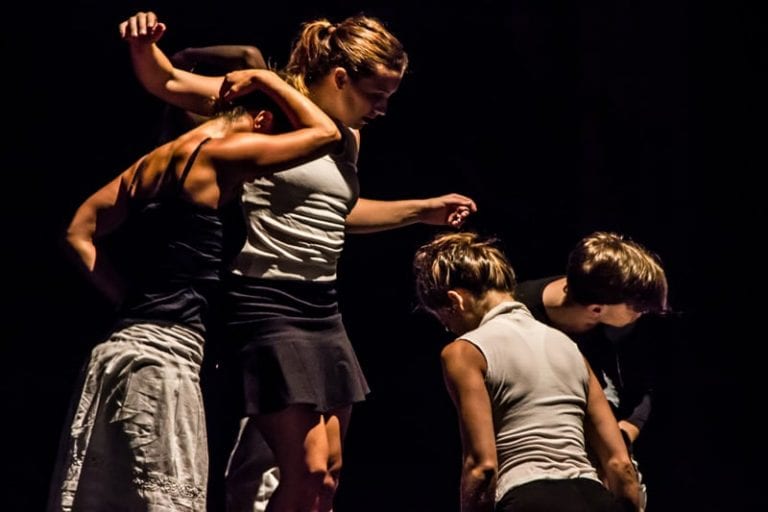 This weekend, the dance artists of CORE Performance Company and musicians of Bent Frequency will perform a new collaborative work, on love, at Callanwolde Fine Arts Center. They will present three performances in all: Friday and Saturday at 8 p.m., and Sunday at 3 p.m.

The new work is touted as “intimate and immersive.” CORE artistic director Sue Schroeder and Bent Frequency codirector/percussionist Stuart Gerber also promise it will not be your typical Hallmark take on Valentine’s Day.

It’s not the first collaboration between CORE and Bent Frequency. They first performed together in April 2012 on the Woodruff Arts Center’s Sifly Piazza in Art/Movement, near the conclusion of the High Museum’s Picasso to Warhol exhibit. They subsequently collaborated in John Cage’s Musicircus that September, as part of the four-day centenary celebrations of Cage’s birth at the Goat Farm Arts Center, The Ten Thousand Things.

Their previous collaboration at Callanwolde, Secret, was in February 2013, with choreography by Sue Schroeder and guest artist Becky Valls with Bent Frequency providing the live music. Secret explored the majority of Callanwolde’s main floor spaces with performers and audience close to each other and constantly mobile, abandoning the theatrical fourth wall that traditionally exists between them.

This weekend’s on love promises to expand upon that premise, extending the performance space to Callanwolde’s upper level as well, including some of its smaller rooms. “When you’re in that space you have to use the space in a special way, since it’s not a typical stage,” says Gerber. “We’re using more of the rooms than last time, really exploring the whole house.”

Schroeder says the audience placement at Callanwolde will be a different experience for this performance. “Last time, it was informed by the architecture of that space. This is going to be more intimate because there are going to be things happening in each of the smaller rooms. The audience is going to be able to wander for a portion of it and choose the experience they want to have.”

Under Schroeder’s direction, CORE dance artists Stefanie Boettle, Anna Bracewell, Kristin D’Addario, Joshua Rackliffe, Rose Shields and Erik Thurmond have been developing the choreography as cocreators, while Gerber has been working with Schroeder and her dancers to select existing music and develop new music to go with their movements.

There will be live music in some of the rooms involving four Bent Frequency musicians in all: Gerber on percussion plus flutist Sarah Ambrose, violist/violinist Tania Maxwell Clements and cellist Chelsea Dunn. In addition, Gerber created prerecorded electronic music for some of the choreography and has composed additional live music that is continuing to evolve as the performance dates draw near.

Because of its deeply collaborative nature, the development of on love since November has been a creatively malleable affair. The poems of Rumi and Rilke have been important source material for imagery in the project. In the beginning, Schroeder read a poem by Rumi to the dancers, having them write down stream-of-consciousness responses, select a single word from that which popped out at them, and then find a word that was its opposite. Between those two, the dancers started to develop movement, which has continued to morph and conceptually deepen over the ensuing several months.

Although still in its final evolutionary stage, the plan is for the one-hour show to begin and end with audience and performers convened in Callanwolde’s Great Hall. The middle half hour of the performance, however, will be a modular thing, with movement and music taking place in five rooms simultaneously. The audience is given the choice of what they want to see and in what order. The smaller rooms will impose a kind of intimacy both on the dancers’ movements and upon their relationship to the audience — something still considered nontraditional for dance.

“They get to decide,” says Schroeder of the audience. “As artists, we have to ensure that every one of those experiences is valid.”