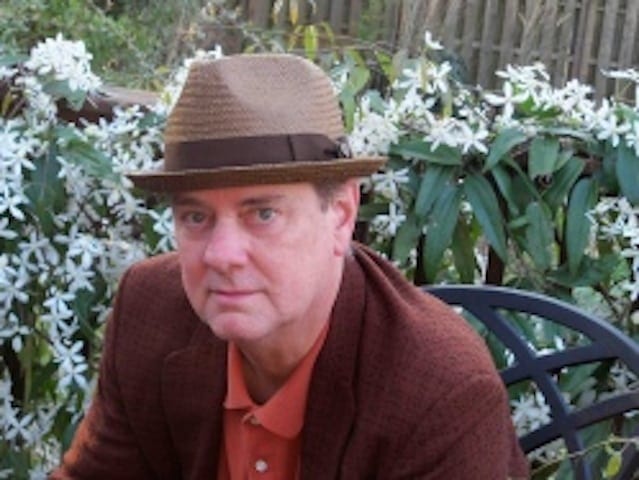 Phillip DePoy sits at Java Monkey in Decatur, a cup of coffee already in his system. It’s a bit ironic. As someone who has spent 50 years as a local writer and theater figure, he doesn’t need caffeine to share terrific stories and insight.

As always, DePoy has multiple projects brewing, but on this morning he is eager to discuss his new Edward Foote, a world premiere now in previews and running tonight through April 19 at the Alliance Theatre.

DePoy’s take on Oedipus the King, Edward Foote is a Southern Gothic tale about a stranger’s arrival in a small Appalachian community circa the 1930s. The identity of the drunken central character is the play’s ultimate mystery. It’s not an exact retelling of the Oedipus mythology, however. The playwright promises surprises. “It doesn’t follow a parallel course to every plot point or character,” he says.

The show wound up at the Alliance after DePoy sent Susan Booth, artistic director of the company, a fan letter of sorts. After seeing Booth’s version of August: Osage County in 2011 and loving it, DePoy emailed her. She responded back, and the two started an exchange. DePoy is an Edgar Award–winning playwright.

Eventually he popped the question. “How about a version of Oedipus set in Depression-era Appalachia?” he asked. Booth responded affirmatively and the playwright got to work. He has been staging workshop versions the past few years.

Booth recalls being intrigued. “The ancient Greeks turned out a few classics,” she says. “Heck, you might argue that they originated the canon of dramatic literature. They certainly threw some terrific stories into the human narrative pot that have held up pretty well.”

She liked DePoy’s take on the ancient tale. “When he suggested that he might like to have his way with the Oedipus story — and by ‘have his way,’ he meant throwing Appalachia and shape note singing into the mix — it seemed like a journey to take,” Booth says. “Because, at its roots, the Oedipal story of overweening pride, familial trauma and an unsolved murder mystery is kind of a classic for the stage.”

DePoy has written 47 plays but says this might be his most airtight. “I have been commissioned to write plays before, but none have had this much care and loving attention as this one,” he says. “Susan and the dramaturg (Alliance’s director of new projects) Celise Kalke have spent a lot of time, with magnifying lens, going over every line. I get that kind of scrutiny from every novel but this is the most scrutiny I’ve gotten in a play.”

The creative team didn’t consider many people to direct, but when Booth suggested Chris Coleman, the former artistic director at Actor’s Express, DePoy was immediately receptive. “I think he is a genius,” he says. “He knew the world, the characters, the ideas. He grew up in a fairly conservative southern background, churchified, and understood the context. He is smart about how to stage it and is very specific.”

Sitting down for the interview a week before previews, DePoy feels the play is pretty much finished, meaning there won’t be day-of tweaks. “It’s about cooked,” he laughs. “It’s too confusing for everyone to make script changes during tech rehearsal.” The idea for the play probably started for DePoy in 1969, when he was a student at folklore at Georgia State University, required to do field research in the mountains of Georgia. “I took my reel-to-reel tape recorder and recorded songs and stories and was knocked out,” he recalls. “I’ve been in love with music and those stories and the people up there ever since.”

As the music director of the play as well, DePoy feels the Appalachian music is a major component. “I like the true traditional music,” he says. “I’m not as big a fan of bluegrass and slicker music, but old timey music — with guys who work in a saw mill who pick up a guitar when they get home and play and sing. That sounds great to me. The feel — rough hewn, not professional, not slick — got into every aspect of the language, the plot, the approach, the mood and culture. It’s the heart of the play.”

He and his brother Scott, an actor and musician, will be involved in some pre- and post-show performances and talkbacks during the run.

DePoy’s first published work was a poem in 1973, but he has been writing since 1965, when he was part of the Actors and Writers Workshop theater group, where he penned poetry and small plays. The company was run by Walter and Betty Roberts, the parents of Eric and Julia Roberts, and included children from the family of Dr. Martin Luther King Jr.

It was the first integrated theater company in the South, even though it involved kids. He has great memories — and stories. “Yolanda King kissed me onstage and set off a minor event in Atlanta that involved the Klan. It was mostly a drunk; his idea was that he would throw a Molotov cocktail on the stage we were on but he lit it too soon and caught his car on fire. The car blew up during the play. The show stopped, and [Walter Roberts] called intermission.”

He did work as a composer in residence for the Academy Theatre in the early 1980s as well as some freelancing around town, including handling the music for Angels in America at the Alliance.

Years later, Eddie Levi Lee became artistic director of Theatrical Outfit and asked DePoy to write music for him. As a result of being so involved with the theater, the board of directors considered DePoy for artistic director when Lee moved to Seattle.

“It was clearly a lapse in judgement,” DePoy quips. He served from 1991 to 1995. It was hard times for the Outfit, especially financially, but DePoy is proud of his work there. He considers a version of Beowulf the best overall piece of theater he’s been involved with. “The audience comes in, they sit with the actors and the monster comes in and busts through the door,” he says. “The monster was Allen O’Reilly and he was 10 feet tall on stilts, and every night, someone left the theater because they were scared. He was dressed in some kind of Wookie costume, stuff dripping off him and the lights were low.”

The greatest effect was when the monster tore the arm off of someone in the audience. It was actually an actress who had a prosthetic arm and had suggested, “How about if he rips my arm off?”

Yet running a company posited challenges he didn’t foresee. “The artistic director is one of the world’s great misnomers; the last thing you do as artistic director, for most people, is art,” he says. “I spent most of my time worrying about whether the building was going to collapse. I cleaned toilets during a show a couple of times. There’s the money, the funding, worrying about the administrative people getting along. People who do this for a long period of time, I am in awe of them. You have to have the stamina of King Kong.”

From there he worked in several university theater programs, which gave him more time to write. Easy — the first of his acclaimed mystery novels — came out during that time.

As a writer, he has never had a problem juggling projects. “I just love it,” he says. “I wake up in the morning, often too early, because I can’t wait to get at it. I am excited about it all the time.”

For DePoy, juggling projects such as writing a play, two novels and a short story at the same time is almost natural. “I work on this a little bit, that a little bit, then it’s time for lunch,” he quips. “Then it’s time to be with my wife [playwright Lee Nowell]. Trying to figure out if the building you are working in is going to collapse and writing a novel is hard. Working on Edward Foote and writing a novel — that’s a snap.”