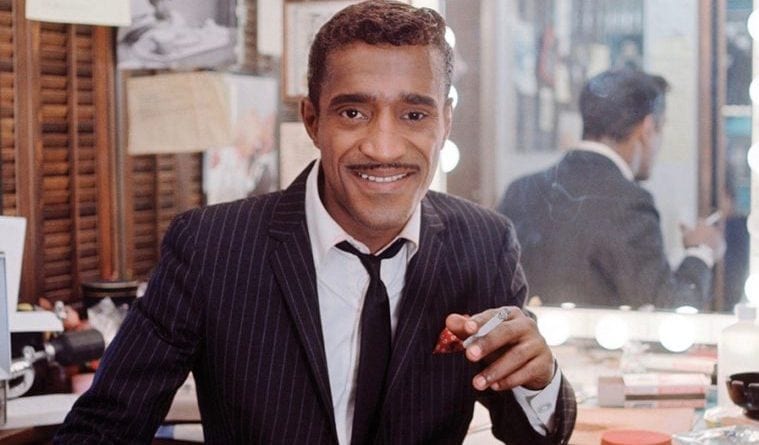 Stretching over 23 days, this year's Atlanta Jewish Film Festival kicks off with Sammy Davis, Jr.: I've Gotta Be Me.

Every winter, a theme tends to emerge organically from the titles chosen from around the world for the Atlanta Jewish Film Festival, which begins its 23-day run on Wednesday at venues around the metro area. One year, strong films about Israeli-Palestinian tensions ruled the lineup. Another year’s films addressed Poland’s belated atonement for complicity with the Nazis (that lineup included the gorgeous, Oscar-winning Ida).

This year, many of the films I previewed dealt explicitly with the Holocaust and World War II. That seems fitting, since one of the AJFF’s vintage screenings will be of Steven Spielberg’s masterwork, Schindler’s List, now observing its 25th anniversary. (Other anniversary films being shown this year include The Boys From Brazil, Funny Girl and Mamele.)

As usual, the festival — the city’s largest, now in its 18th year — includes documentaries, features and shorts. And, as happens every year, though I tried to screen as many available films as I could in advance, I know a bunch of gems eluded me. Here’s hoping you’ll find some of the ones I missed.

Below are my quick takes on the movies I watched. For complete details and schedules, go to the festival website.

An Act of Defiance. In 1963, the South African Jewish lawyer Bram Fischer (Peter Paul Muller) takes on the sabotage trial lodged against Nelson Mandela and several of his comrades. The case was unpopular, and made Fischer no friends. But what made his work even trickier (and suspenseful) is that Fischer himself was collaborating with Mandela and his men in plans to undermine the Apartheid government. The movie plays as a mix of cat-and-mouse and courtroom drama. Its real power, though, lies in its depiction of Fischer’s partner in love and politics, his wife Molly (Antoinette Louw). The movie is as much the portrait of a marriage as it is a political drama.

A Bag of Marbles. I’m kind of a sucker for wartime tales of kids facing and overcoming peril. So I was fair game for this fact-based French drama about two young boys whose parents send them alone cross-country in search of the free zone of the Riviera in 1944. What gives the drama a lot of its poignancy is our realization that the boys don’t entirely understand the nature of the danger they’re escaping. Too easily they forget their directive and start acting (dangerously) like they’re just a couple of boys on vacation. The young actors have lovely rapport, and the movie builds to an affecting climax that shows how ugly life became for German collaborators at the end of the war, and how a small act of mercy could be a very great thing.

Budapest Noir. You have to give the movie credit for truth-in-advertising. This pleasant but not especially distinctive mystery, based on a series of popular Hungarian novels, stars Krisztián Kolovratnik as a hard-boiled crime reporter in 1936 Budapest trying to unravel the murder of a young prostitute, whose death points to people in high places. The movie throws in conscious echoes of previous noir pastiches like Chinatown and L.A. Confidential, including a wailing sax on the soundtrack.

Bye Bye Germany. A shaggy dog story that actually features a shaggy, three-legged dog, this comedy stars Moritz Bleibtreu (Run Lola Run) as Bermann, a Holocaust survivor who, with some friends, tries to get back to work and restore his family’s linen business in the days following the war. That involves some ingenious, comical ruses to get inside people’s homes to pitch their product. (Pretending to faint in a housewife’s doorway, or pose as a physician are a couple of methods.) Simultaneously, Bermann is being grilled by a comely US special agent (Antje Traue), who believes his close experience with S.S. officers during the war suggests he was a collaborator. He explains to her what he did during the war with increasingly implausible stories that, actually, are just crazy enough to be true. “If one didn’t embellish life with lies, then it would be unbearable,” is Bermann’s motto. The mix of comedy and serious topics doesn’t always work seamlessly, but it’s an engaging portrait of small-time hustlers trying to repair a world gone briefly mad — and get the hell out of Germany when they raise enough cash.

The Cakemaker. Following the death of her husband, young mother Anat (Sarah Adler) struggles to keep her kosher restaurant open. She gets unexpected help when a young man from Berlin, Tomas (Tim Kalkhof), a new arrival in Jerusalem, proves to be a fantastic baker and helps boost the business. What Anat doesn’t know is that Tomas was the lover her traveling husband always stayed with when business took him to Germany — and for whom he was planning to leave the marriage. What sounds like a Hitchcock-toned stalker-thriller turns out instead to be a lovely examination of how two grieving people manage to help each other, even unknowingly, to move forward with their lives.

If You’re Not in the Obit, Eat Breakfast. Carl Reiner “hosts” a bunch of his fellow 90-something Hollywood powerhouses (Norman Lear, Mel Brooks, Kirk Douglas, Betty White) in an amiable attempt to find the explanation for their creativity and long lives. No, it doesn’t have particular revelations about the secret to longevity (Dick Van Dyke’s advice is simple and sound: “Keep moving”). But it’s very entertaining to spend some time with all these troopers.

The Invisibles. A fascinating documentary-feature hybrid, it’s the tale of two men and two women who managed to survive life in Berlin during wartime, successfully hiding their Jewish identity through a combination of street smarts and the humane intervention of non-Jews — those citizen heroes who were later named Righteous Among the Nations. The movie partly consists of onscreen interviews with the four, much older survivors, intermixed with dramatic and well-crafted recreations of their stories by young actors. Recalling her days and nights of keeping herself alive on the winter streets of the city, and saving her money to re-dye her hair blonde every few weeks, survivor Hanni Lévy, in a great understatement, says, “It’s all a bit of a blur.” Like the others interviewed, she recalls taking a huge risk — in her case, identifying herself to the mother of the German soldier who was courting her before being called to the front. In that split second, you realize her entire life hinges on the older woman’s response. It’s first an unbearably suspenseful, then deeply moving moment.

Itzhak. An affectionate tribute to the life and work of the Israeli-born violinist, whose most piercing work may be on the Schindler’s List soundtrack. The documentary doesn’t offer much of a backstory or a narrative framework. It’s more about hanging out with Perlman and his friends, including a genial drop-by visit from Alan Alda, for whom Perlman cooks “garbage soup.” Like An Act of Defiance and the documentary On My Way Out, the movie’s secret weapon is its portrayal of Perlman and his wife’s long, loving bond. (For the record, she proposed to him.)

Jungle. Former Harry Potter, Daniel Radcliffe, affects a wavery Israeli accent as Yossi Ghinsberg, who travels to Bolivia in 1981 with a couple of fellow travelers and a jungle guide (Thomas Kretschmann), who leads them into catastrophe. Based on Ghinsberg’s true story and directed by Australian Greg McLean (Wolf Creek), the tale of the young man’s endurance alone in the wild can sometimes feel as grueling for the viewer as it must have been for the actual man.

The Last Suit. To the tailor Abraham (Miguel Ángel Solá), even the very name of Poland is a blasphemy that he refuses to speak. But now, an old man in Buenos Aires, he flees his adult daughters, who want to put him in a home (nice echoes of King Lear here), and returns to his homeland one last time to deliver a suit to the man who nursed him back to health after his time in a concentration camp. The film is a picaresque, bittersweet comedy that features terrific work from Solá as well as Ángela Molina, Natalia Verbeke and Julia Beerhold as people who (try to) help him in his travels.

On My Way Out: The Secret Life of Nani and Popi. It’s only 40 minutes long, but the power of its subjects’ emotional torment makes this terrific documentary have the weight of an epic. It’s the story of the wonderful, terrible marriage of Ruth and Roman Blank, two Polish Jews who survived the war, married, moved to the States and had kids — all while hiding a deep secret. Roman is gay, and with 65 years of marriage behind him, he’d like to be rid of Ruth and have a chance to live an open, out life. The recriminations, decades in the making, that the couple throw at each other are sometimes heart-stopping. The flipside is, their love is also very evident. When Ruth starts to slide into physical infirmity and dementia — well, fair warning, folks: you may want to be armed with plenty of Kleenex.

Sammy Davis, Jr.: I’ve Gotta Be Me. Late in life, Davis became such a target of mocking celebrity impersonations, it’s easy to forget what a protean performer he was in his heyday. This documentary fixes that, focusing on the diminutive singer-dancer-actor’s remarkable energy — if also his willingness to be viewed as a racial token when he shared the stage with the increasingly sloppy band of bros known as the Rat Pack. The documentary includes early footage of him as a young dancer in 1939, and a moving tap-off with Gregory Hines at a TV special in his honor shortly before his death. If sometimes there was a little too much need for love in Davis’s aim-to-please performances, you have to admit, you can’t take your eyes off him.

Schindler’s List. Possibly even better than you remember, it’s Spielberg’s masterpiece. Yes, it may be a little long, yes, there are a few overwritten scenes near the end. But the film’s depiction of the liquidation of the Warsaw Ghetto alone is stunning in its velocity and matter-of-fact brutality. Liam Neeson is terrific as the businessman slowly growing a conscience, almost against his will, and he’s beautifully aided by Ben Kingsley as his deadpan accountant. But don’t forget, this is also the movie that introduced us to the startling, vicious prison commandant played by an unknown called Ralph Fiennes, who’s brilliantly scary.

Spielberg. Sure, this HBO documentary is something of a puff piece. Nobody has anything bad to say about the tireless director — who made Schindler’s List and Jurassic Park in the very same year. But if, like me, you grew up on his films, it’s just wonderful to see again footage from so many movies that made a mark on us.