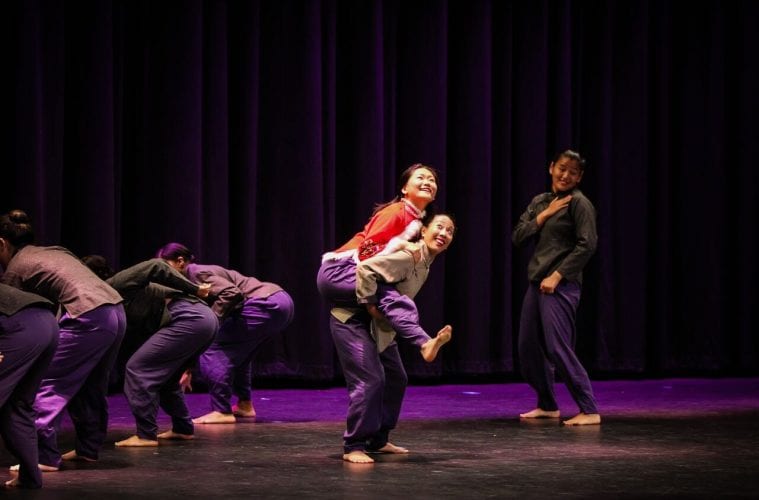 Preview: Atlanta Chinese Dance fills the stage with “Circles of Love and Departure”

It should come as no surprise that the world’s most populated country contains 56 unique ethnic groups. They all call China home yet are influenced by bordering nations, and differ in religion, language and culture. Most notably for the Atlanta Chinese Dance Company, these groups represent an endless abundance of dance.

Their production Travels Across China: Circles of Love and Departure premieres with afternoon and evening shows Saturday at the Infinite Energy Theater in Duluth. It will represent these region’s dances in relation to cycles of love and loss, featuring assorted provinces’ traditional Chinese dances alongside contemporized blends of Eastern and Western forms, and a guest performance of the Sichuan Opera’s ancient dramatic art of Bian Lian. The company’s youngest dancers will embody a train that takes attendees through these richly diverse traditions as they are performed by older students.

“After doing research, I wanted to see whether I could come up with a conclusion about what is specifically different about each region,” says Hwee-Eng Y. Lee, known as Ms. Lee and founder of the company. “I’m still searching for that answer.”

Ms. Lee’s dance journey began in Singapore before she immigrated to the US in 1978. She established the Atlanta Chinese Dance Company in 1991 and has been a pioneer in providing traditional Chinese dance to the metro area for over two decades. Her company was the first Chinese performing arts organization to perform in the state, and the first to receive funding from the Georgia Council for the Arts and the National Endowment of the Arts. Her daughter, Kerry Lee, grew up in the company. She attended Stanford University for engineering and management science, and graduated from the program with a dance minor, returning to Atlanta with a swath of professional and modern dance experience.

As codirectors of the company, mother and daughter shoulder teaching and production responsibilities. Together they train over 80 dancers ranging in age from four to 70 years old, and strive for inclusivity in both school and audience membership. The company produces a two-hour original production every year and a half in addition to giving outreach performances for local schools, libraries and other community centers.

“We watch a lot of choreography from China,” says Kerry Lee, who explains how many of the company’s dances are modified from established choreography. “After deciding what we want to include in the show, slowly the theme emerges.”

Traditional Chinese dance utilizes an array of props including ribbons, fans, long sleeves, hats, lanterns, swords and umbrellas. The company has garnered buzz from audiences for their elaborate and authentic costuming. Ms. Lee describes Chinese dance as circular, with wider dimension in the upper body as opposed to the square, upright sensibility of some Western dance forms. While it does share ballet’s inclination toward specificity and structure, each ethnic group’s dances boast a distinctive style.

In one tale from the Miao ethnic group of southern China, a bride leaves her village for love adorned in silver, jingling accessories and headdress. From the southwestern Sichuan province, guest artist Tony Laio will share the Sichuan Opera’s generations-old magic of face changing or “Bian Lian,” without giving away the secret of how the masks instantaneously transform.

“When people think of folk dance, they think of people standing around in a circle and doing simple steps,” says Kerry. “The experts in China may go to the villages and see the very traditional, raw, unembellished version of the movements, then take that and turn it into a more artistic product. It’s interesting to see the younger generation of choreographers preserve the essence of the culture while keeping it fresh and relevant.” This year’s production will close with a three-part mini-drama that concludes with “Chinese Mother,” an award-winning piece adapted from China’s Northeast Normal University. The piece impacted the mother-daughter team deeply, as it follows the real life events of rural Chinese mothers adopting Japanese orphans in the wake of the Second Sino-Japanese War.

Kerry says it might be hard for American audiences to understand the inconceivable grace in these maternal acts without historical context. This spurred her to create a work about the Nanjing Massacre, in which Japanese troops took the lives of 300,000 Chinese citizens.

“It’s a bloody history that is well known in the Chinese community but isn’t talked about in the West,” says Kerry. “You have to know where these women are coming from to know how incredible it is that they were able to choose love in such a time of hatred.”

Depicting the ominous war-time atmosphere, Kerry describes one moment during the Nanjing Massacre piece, where the entire cast arches back until all that can be seen is their lower torsos and pointer fingers stretched upward, giving the appearance of bodies destroyed. At the closing of “Chinese Mother,” another scene of anguish leaves one dancer covering her mouth in disbelief while another clutches her tightly.

This is a different kind of departure, however, as the adopted Japanese children, loved and raised by the Chinese mothers, eventually return to their birth families. Both Ms. Lee and Kerry spent hours with students in the company discussing how to portray characters that are many years their senior and be vulnerable onstage given the events’ turbulence.

Energized to share the results with audiences, Ms. Lee and Kerry remark on how the whole production emphasizes their commitment to sharing their culture and bridge understanding, as well as open conversations around how to choose compassion in the face of seemingly insurmountable adversity.