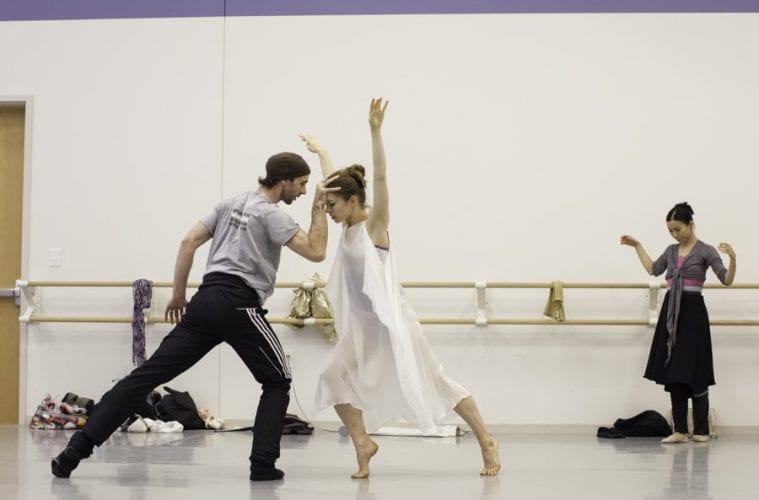 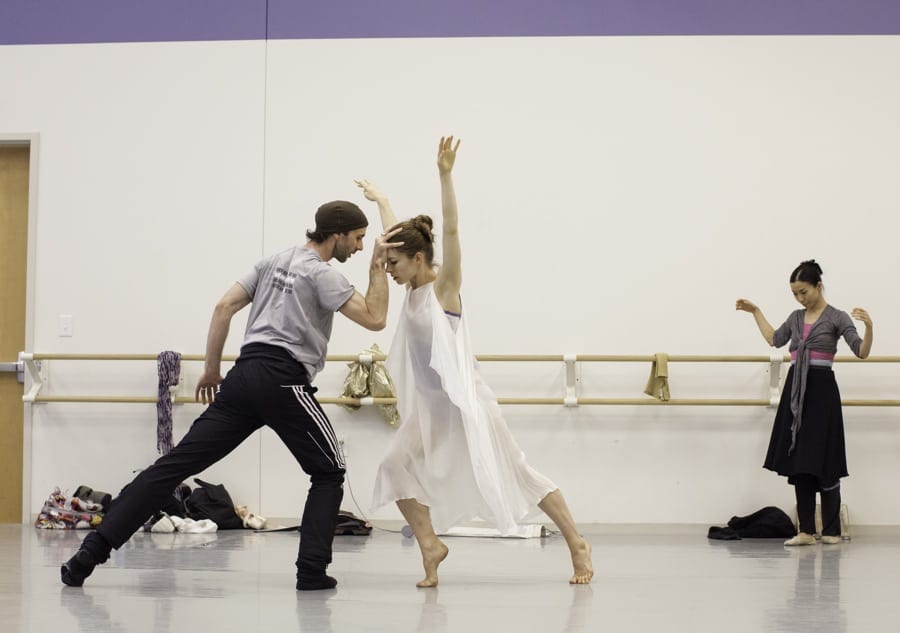 Rogers in rehearsal with John Welker as Friar Laurence. (Photos by Charlie McCullers)

It’s 11:30 a.m. at the Atlanta Ballet studios, and two dozen dancers are watching Alessa Rogers and Christian Clark run through the balcony scene from Jean-Christophe Maillot’s Roméo et Juliette. As Prokofiev’s soaring music comes to a close and the two young lovers part, the other dancers break into spontaneous applause. It’s still a couple of weeks before the company performs this three-act ballet for the first time (February 7–15 at the Cobb Energy Performing Arts Centre), but Rogers is already a deeply convincing Juliette. With her slight frame, long neck and finely carved collarbones, she makes us feel the tingle of first love in every move.

“When I see Roméo across the room in run-throughs it’s like tunnel vision,” Rogers says the following day. “Everybody else just disappears. Even though there were a lot of people watching yesterday, I wasn’t aware of anyone except Christian. That’s the wonderful thing about this choreography. It lends itself to creating that bubble between the two of us.” 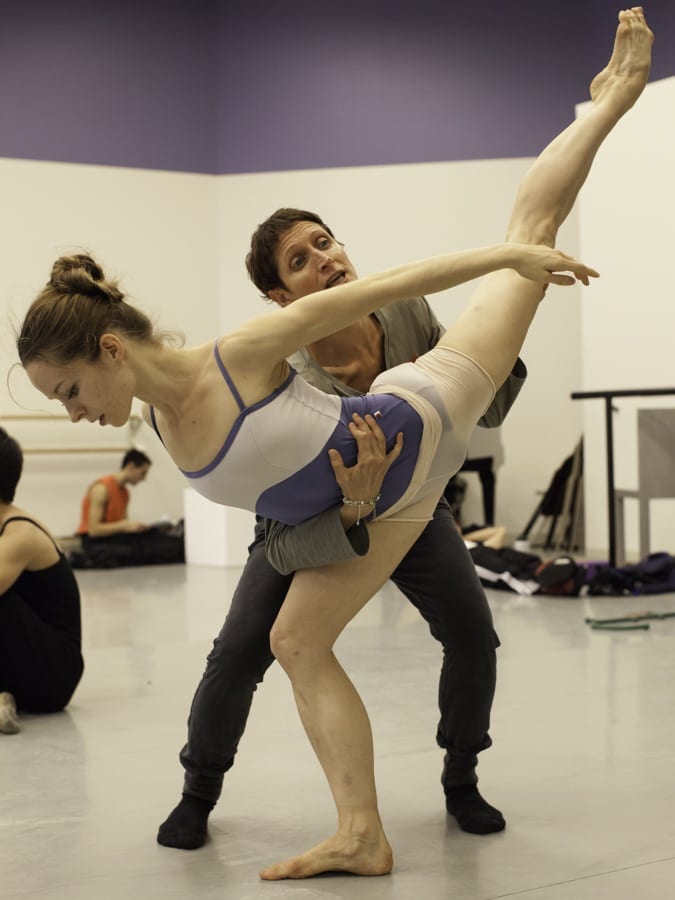 Originally created for Les Ballets de Monte Carlo, Maillot’s Roméo et Juliette is a major departure from the classical versions, including Michael Pink’s, which Atlanta Ballet performed in the early 1990s. (Rogers danced the ensemble parts when the ballet was revived in the 2007–08 season.) The traditional versions can be thrilling, but they are built mostly on classical movement vocabulary, mime and what Rogers describes as “eyebrow mannerisms” to move the story along. In Maillot’s version, the drama drives the movement.

The action is less about two warring families and more about the psychology of adolescence. It’s told from the point of view of Friar Laurence (danced by John Welker) who, in seeking to do good, allows the worst to happen. The sets and costumes are simple, unrelated to any particular place or time; the choreography is naturalistic and deceptively challenging. Another unique aspect is Juliette’s Act III; she dances the entire act barefoot, a rarity for Atlanta Ballet dancers.

“If you throw classical ballet vocabulary at us, we know what to do,” Rogers explains. “We know how to do pirouettes.” But the unconventional movement and the moments of stillness in this ballet ask more from the dancers. “It’s hard for a dancer to be still,” she says. “You have to maintain your energy and tell the story, make it alive, even though there is no movement going on.”

The two of us are sitting in a large, quiet, white-floored studio, Rogers in a black sweat suit and mismatched wool socks. As we talk, it’s surprising to discover that this is not the emotional, headstrong Juliette I watched yesterday. This is Alessa, a mature, thoughtful and grounded 26-year-old who is parsing her role like an experienced Method actor.

“In the Maillot tradition you are not playing the part, you are that person,” she explains. She finds the feelings within herself, “lets them be true” and expresses them in movement, following the choreography but allowing space for spontaneity.

Smart and intensely focused, Rogers has researched the role by reading the Shakespeare play, watching multiple movie versions, studying the Les Ballets de Monte Carlo production and other Romeo and Juliet ballets, and listening to the music constantly at home. 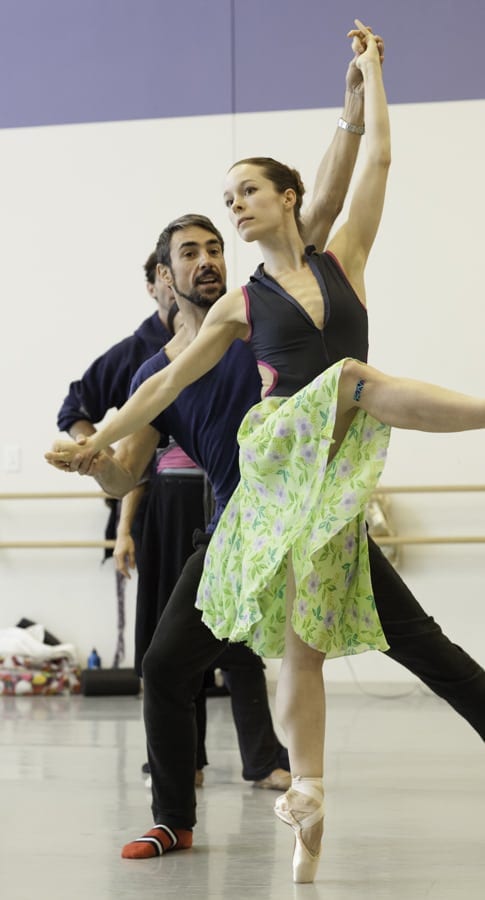 Being a “lifelong voracious reader” has helped her inhabit the role more fully. Jane Eyre and The Mists of Avalon are among her favorite books. “I learn about different types of people, understand their emotions and gain a certain empathy I wouldn’t have if literature was not such an important part of my life.”

Compared with most of the Juliets she has researched, this one is not a naïve 13-year-old. “She’s more woman than girl,” Rogers explains. “She knows a thing or two. At the beginning she thinks she’s a woman; by the end she truly is a woman. That’s the arc she has to go through.” She says she likes having a more “multidimensional” Juliette to work with. “I like being able to be sensual, to make choices for myself. It’s a different idea of Juliette.”

What she feels in the role also impacts her own life. “When I need to draw on past negative experiences to go deeper in certain scenes, it feels as though those past struggles are being redeemed.”

Her boyfriend, Carson Wick, who’s studying for a PhD in electrical engineering at Georgia Tech, has been very understanding of her total Juliette immersion. “He has been hearing Prokofiev so much (at home) I feel bad for him. I think about Juliette constantly, in the shower, making food. I have been having Roméo et Juliette dreams since October. Sometimes they’re good. Sometimes I dream that I can’t remember how to tie my pointe shoes and I wake up sweating.”

Rogers and Wick have been together for almost seven years, but she still remembers the first thrill — the same intense feelings that Juliette experiences when she meets Roméo. “It’s when you are standing next to someone at a party and you like them so you rub your pinkie finger against his and it feels as if the whole world caught fire in that one finger.”

She uses this image in the first scene with Clark. “It’s just our hands that touch. We don’t kiss or do big lifts, but the sensations are there.” They certainly kiss later in the ballet, and Rogers remembers how Clark came to their first rehearsal smelling of Listerine. “I knew he meant business,” she recalls with a smile.

Rogers knew from an early age that she wanted to dance. In her teens, she and her older sister, Erin, moved to Winston-Salem to attend the North Carolina School of the Arts. She danced for a year with the North Carolina Dance Theatre’s second company before joining Erin, who was by then an apprentice at Atlanta Ballet. (Her sister later left the company and now teaches yoga in and around Atlanta.)

Rogers’ entry into the company was unorthodox. “I just showed up at the Giselle rehearsal,” she recalls. “I didn’t really ask to be here.” In those days, she got up at 3:30 every morning to work the early shift at Starbucks, went to rehearsals during the day and took class at night. She was soon noticed and worked her way up the ranks, becoming a full company member in 2007.

Since then she has had lead roles in Dracula, The Nutcracker, and David Bintley’s Carmina Burana. She performed nude in Gina Patterson’s I Am, a daring move for any dancer, and was the princess in Twyla Tharp’s The Princess and the Goblin.

The Maillot company’s stagers saw her in that ballet two years ago and were immediately impressed. “Alessa was the obvious choice as Juliette,” says stager Giovanna Lorenzoni. When they came back to Atlanta in October 2013, they chose only one lead cast for all seven performances. This puts more pressure on Rogers: choreographers usually choose two or three casts, giving multiple dancers the opportunity to dance lead roles and providing them with more rest between shows.

Rogers seems unfazed but admits “it’s a monster of a ballet.” It’s only the beginning of what promises to be a breakthrough season for her. She’s been cast as Ophelia in Stephen Mills’ Hamlet (April 11–13), and as Estelle in Helen Pickett’s The Exiled (May 16-18), a daring interpretation of Jean-Paul Sartre’s existential play No Exit. These meaty roles will give her multiple opportunities to show she is one of the company’s most gifted actor-dancers.

“I just want to show everyone the work we’ve been doing and put on a great production. At Atlanta Ballet, we are a family. I always feel very supported by the other dancers when I do a big role, and I couldn’t ask for a better group of people to work with,” she says, her Juliette eyes filling with tears.