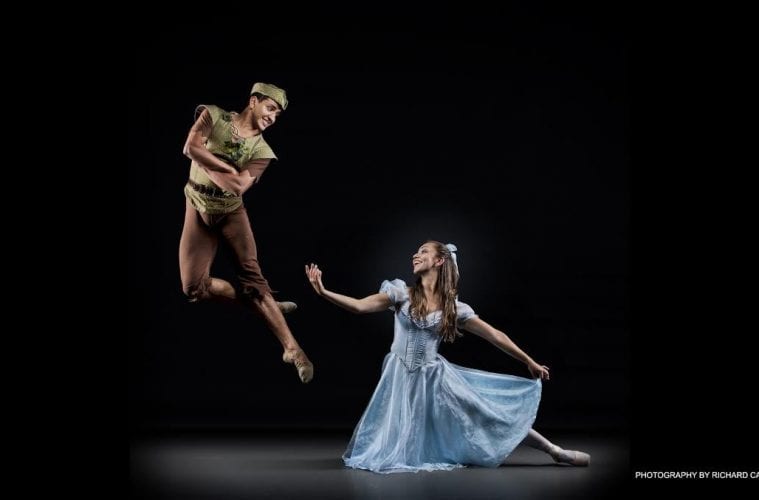 Peter Pan, the classic tale of a boy who never grows up, will open The Georgia Ballet’s 2016-17 season October 8-9 at the J. Alton Keith Theater in Cobb County. “We have always been a family-friendly company,” says Joy M. Johnson, the ballet’s executive director. “And Peter Pan is a wonderful story, well-known to most people. However, they most likely haven’t seen it take flight in ballet.”

The Georgia Ballet’s version of Peter Pan is an original production created for the company by artistic director Daet Rodriguez and his wife, Margit Peguero, who serves as the company’s ballet mistress. The couple has experience with bringing this story to life through dance. They’ve previously performed the roles of Peter Pan and his fairy comrade, Tinkerbell, with the Saint Augustine Ballet in Florida.

Rodriguez is a new face at The Georgia Ballet, embarking on his second season with the company this fall. “I’m very happy to be a part of The Georgia Ballet and extremely satisfied with all of our achievements,” he says. “Starting this season is a new challenge and I would like to keep up the expectations, image and same quality of professionalism that we left audiences with last season.”

His future artistic goals for the company include raising the technical level of the dancers, giving students the opportunity to develop as professionals and pushing The Georgia Ballet repertoire each season.

Rodriquez and Peguero grew up in Cuba where they received their ballet training and began their professional dance careers at Ballet de Camagüey. They went on to join Teatro Centro de Arte Leon Febres-Cordero in Ecuador and also opened a dance school there. They have appeared as guest artists in different countries around the world.

They joined The Georgia Ballet as faculty members at the school in the summer of 2015. During this time, Johnson was searching for a new artistic director. As she watched Rodriquez teach and interact with dancers and staff members, she realized she’d already found the person for the job.

“Daet brings his excellent background and Cuban ballet training to the company,” Johnson says. “He is as much about improving individual technique as he is about delivering wonderful ballet to our audiences. The company loves him and works incredibly hard under his direction. He is demanding and at the same time so supportive. Last season, as he was struggling with his English, I saw him onstage with a dancer who was performing her first principal role. He had his iPhone turned to her and it read, ‘I believe in you.’ That is Daet Rodriguez.”

Rodriquez’s interpretation of Peter Pan will meld classical, contemporary, and other styles of dance to a score by Stephen Warbeck. Company dancer Francisco Aguilar will take on the title role, and Katie Owerbach and Kelsey Stanhope will alternate as Wendy.

“Learning the part of Peter is a whole new experience as an artist,” says Aguilar. “That, for me, is thrilling. The rehearsal process has been challenging in the technical and interpretative aspects. I have received a lot of advice on how to make my character more real and fun. I am enjoying this experience of getting to be Peter.”

For Owenbach and Stanhope, the role of Wendy combines the magic and demands of portraying a young girl. “It is both challenging and exciting to play her,” says Owenbach. “The scenes in the ballet include both drama and dancing, which is exciting and fun for me. Wendy’s actions must reflect those of a girl, not an adult. As performers, we hope to portray this wonderful story and transform the stage into a storybook.”

Stanhope adds that, in rehearsals, she is encouraged to “be more childlike.” Outside of rehearsal, she likes to find scenes in the Disney version of Peter Pan that feature Wendy and use them as inspiration. “This role allows me to just act like a kid again,” she says. “I won’t have to worry as much about how technical my steps are. I can just go out and really embody the character.”

Rodriquez believes Peter Pan will resonate with audiences of all ages. “This ballet is a tale of fantasy and adventure,” he says. “We are living in a world that is accelerated and agitated with technology. At times, we leave family and human relationships on the side. Peter Pan is a story that revives the belief in the imagination of children, strengthens family love, and keeps alive the light of youth that we all have inside us.”