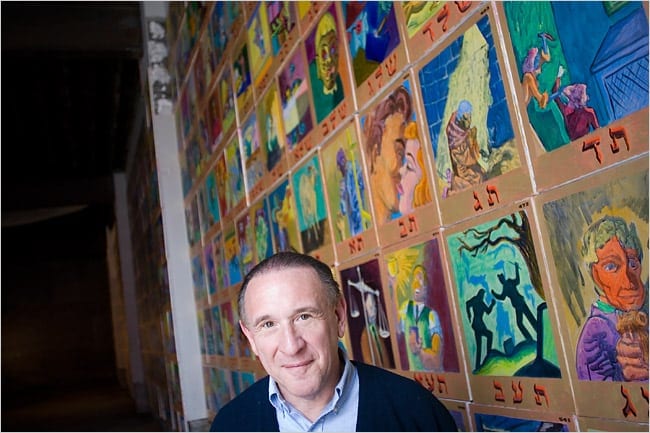 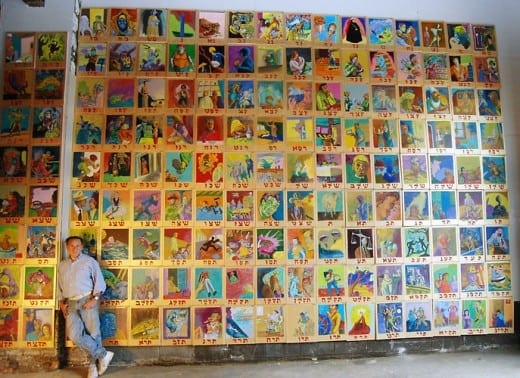 Archie Rand was a precocious abstract painter already showing at a prestigious Manhattan gallery in the 1970s, when he made a radical decision: to make Jewish art.

Not art about Jewishness, he would tell Bomb magazine in 2003, but art that was Jewish, “paintings don’t indulge an unlived, imported nostalgia, and they don’t invoke a predictable iconography.”

Given the art world’s general dismissal of (un-ironic) religious art and, at that time, of figuration, he knew that the decision would have financial and social implications. Even after calculating the potential loss of income at more than $2 million, he concluded the sum was not enough, as he said in a recent telephone conversation, “to sell out your entire life.”

Although Rand, now 66, never abandoned his “secular” career, he undertook this new practice with what you might call missionary zeal, interpreting the Bible in a singular language that blended the vocabulary of contemporary art and comic books with both respect and subversion. 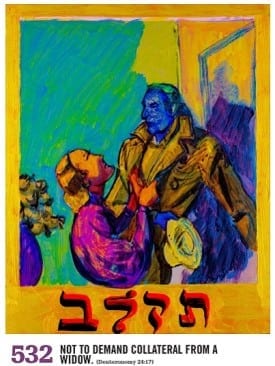 Between 2001 and 2006, he completed his magnum opus, The 613, a cycle of paintings that represent each of the 613 Jewish commandments (or mitzvot) distilled from the Torah by the 12th-century scholar Maimonides. Seen in its 1,700-square-foot entirety only once — for four hours in 2008 — the epic has been reproduced as a book, also titled The 613 (Blue Rider Press).

Rand who will appear at the MJCCA Book Festival on November 11, found few precedents for his journey. Chagall was one. “Granted, Chagall had to make that world in the sky, because down here on earth it was terrible — but he made it whole, and Jewish, and real.”

But Rand, Presidential Professor of Art at Brooklyn College, wanted to take a different path, one that would embody the Talmudic “attitude of permanent disagreement.” In that spirit, he wanted to create a visual language that was not, as he says, “subservient to the word,” the dominant expressive vehicle of Jewish culture for 2,000 years.

He turned to comic books. To Rand’s way of thinking, American comic books are a Jewish art because its originators were largely Jewish. “The art world was a closed canon,” he says. “It was a language we could take over.”

He sees his work in a lineage beginning with Will Eisner and his cohorts, through the transgressive MAD magazine to graphic novelists such as Art Spiegelman, whose Maus: A Survivor’s Tale, based on his father’s experience of the Holocaust, was the first graphic novel to win a Pulitzer Prize, in 1992.

The 613 exemplifies Rand’s style, the Bible as pulp fiction or film noir, a man in a fedora, dressed in lurid colors and expressionist paint handling. Though they might seem impudent, the paintings reflect deep study of and thinking about his biblical sources. 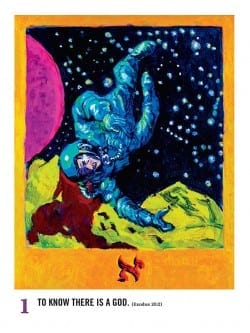 Archie Rand: To Know There is a God. (Photo courtesy of Blue Rider Press)

In keeping with his desire to privilege the visual, he did not include the texts on the paintings. Nor did he illustrate them per se; rather he went for what he calls “subjective metaphor.” For instance, To know there is a God depicts an astronaut floating in outer space, untethered but for his faith.

The book is not a reproduction of the painting, says Rand. Unlike the canvases, each image bears the law it represents. Turning pages and the ability to look carefully at each piece also makes for a different experience, one that will reach a wider audience for the artist, deemed by filmmaker Ang Lee (with whom he’s worked) “a biblical sage for the postmodern world, embracing the viewer and all of history.”

Rand and I will have a conversation at 12:30 p.m. on November 11 at the Marcus Jewish Community Center. A selection of works from The 613 will be on view in the gallery.