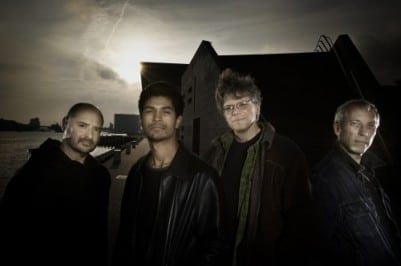 The cultures of Azerbaijan and America will meet onstage when the Kronos Quartet and the Alim Qasimov Ensemble perform together this Friday at the Schwartz Center for Performing Arts. Each group will showcase its own set, then they will join to perform love songs drawn from ashiqs, the bardic singer-songwriters of Azerbaijan. News of the concert has spread rapidly among local Kronos fans, and word at this writing is that only a limited number of tickets are still available.

Kronos will open the first half with some of its own repertoire: “Clouded Yellow” by Michael Gordon, “Aheym (Homeward)” by Bryce Dessner, and Bob Dylan’s “Don’t Think Twice, It’s All Right,” arranged by Philip Glass. Qasimov will follow with mugham, the traditional high-art Islamic religious music of Azerbaijan.

Kronos and Qasimov first got together in 2008 as the initial project in a collaboration with the Aga Khan Music Initiative, which supports Central Asian musicians to sustain and develop their musical traditions. The initial week-long rehearsals, in San Francisco, included Kronos, Alim Qasimov and two of his musicians, arranger Jacob Garchik and a translator. The challenge was to get the notation-oriented Kronos players to interface with the semi-improvised traditions of the equally virtuosic Azeri musicians, and vice versa.

A few months later came several days of rehearsals in London for the world premiere of the music at the Barbican’s Ramadan Nights festival, followed by studio recording sessions. In the San Francisco rehearsals, Alim Qasimov had sung the vocal parts. His daughter, Fargana, joined in the London rehearsals. “All of a sudden, the meaning and the breadth and depth of the songs was incredibly enlarged,” Harrington said. “Every time [we perform], the music takes another step toward itself.”

A stunning example of sudden insight took place a week and a half ago, when the two groups performed in Berkeley, California, the first stop on their current American tour. Winter weather in both Europe and Central Asia had become historically intense, and there were big snowstorms in Azerbaijan and England. The Qasimov Ensemble missed its planned flight to London from Baku, Azerbaijan, and as a result the two groups didn’t have their scheduled rehearsal. Instead, they had to rehearse in the hours just before the concert.

“It was astonishing,” Harrington recalled. “The intensity, after not having performed for five or six months together and having little time to brush up, added this amazing kind of energy to the performance. Everybody was going for it in a new way.”

Harrington likened it to a salient moment early in the Grammy Award-winning string quartet’s history, a rehearsal with Terry Riley in the early 1980s. “I felt the sound of the group all of a sudden change,” he said. “There was that moment, that magic moment when it made sense and there was really a new sound that we hadn’t made before. Those moments are really very special. Not only is there kind of a new word, there’s a new color in the vocabulary. At that moment the door seems to be open for many new words, and newer colors beyond that.”

The recent Berkeley concert reopened some of those doors and colors. “We were creating a bed for Alim and Fargana to sing mugham over, and then we were creating commentary along with the other members of the group,” Harrington explained. “It felt as though our commentary was part of a different language than we had ever spoken before. It was a very exciting moment. Maybe the audience didn’t hear it, but I could feel it, and I was really happy about that.”

It’s the kind of moment every musician dreams of, when everything on stage clicks together and the music transcends itself. “We all know we can feel it inside, feel the tingle in our backs when it might happen,” Harrington said. “They can be very, very unexpected, those moments. That’s what binds all music together, those very rare experiences. Alim and Fargana are two of the most wonderful singers that I’ve ever heard, and I’m sure you will hear several of those magical moments come from their voices in Atlanta.”