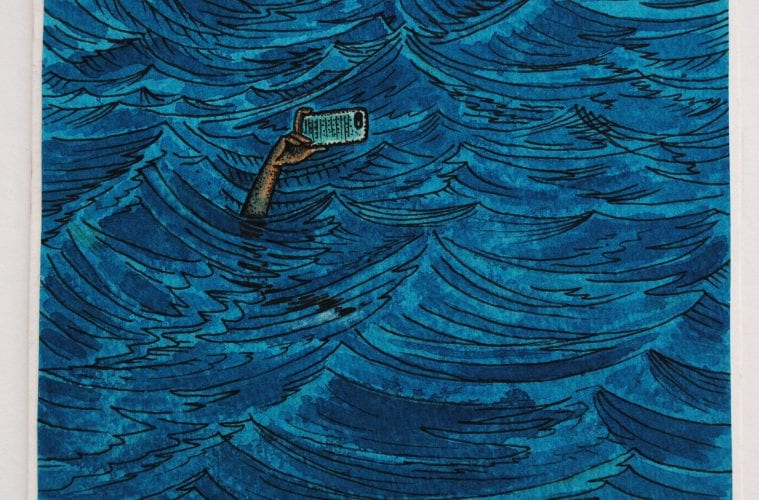 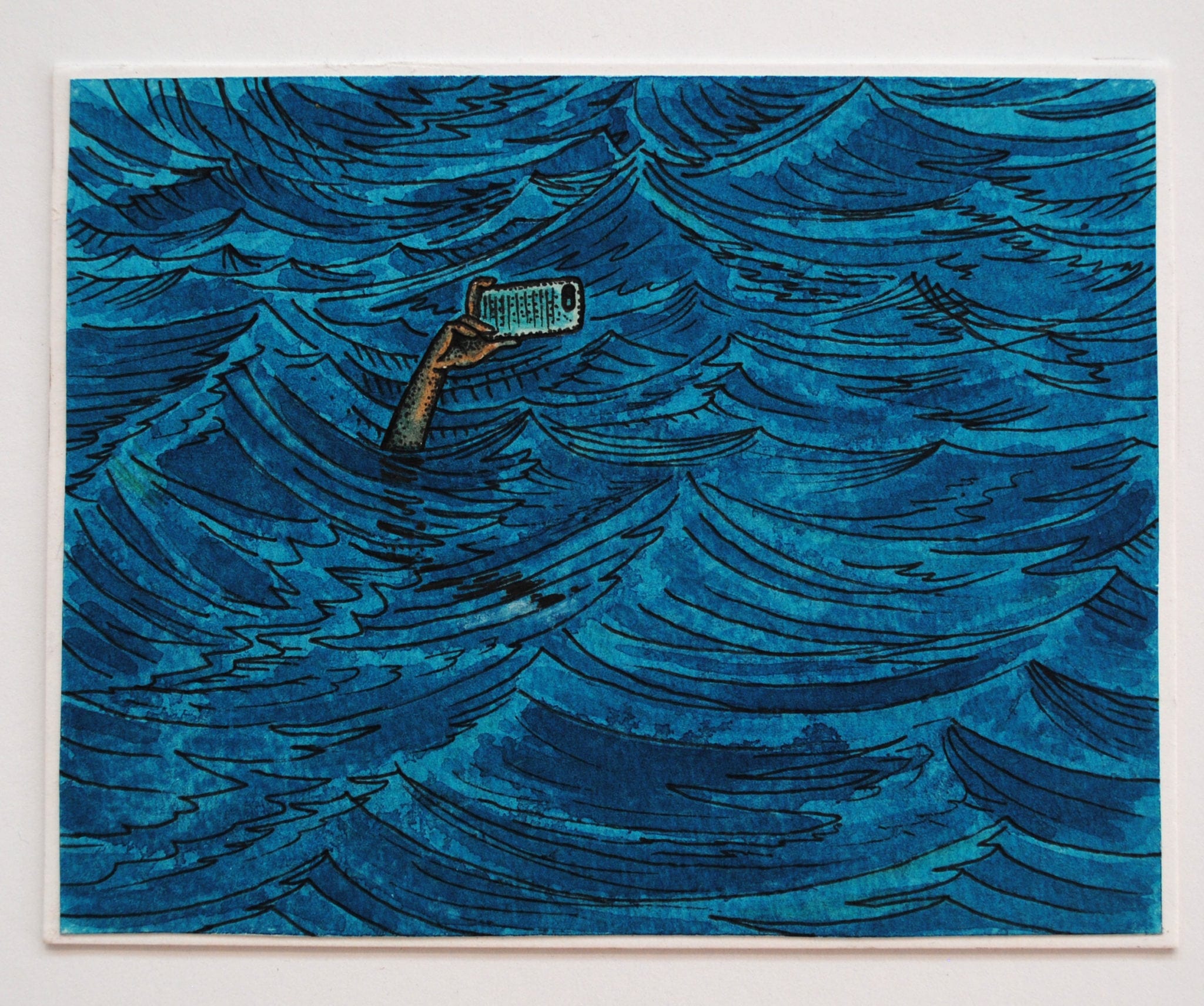 Like the soundtrack that quietly infuses his Southwest Atlanta studio, Alejandro Aguilera’s illustrations are nuanced, layered and kind of blue.

“When I’m drawing,” explains the Cuban-born painter, sculptor, muralist and draftsman, “I go on a visual trip … circling one main idea and expressing it on paper. To me, it feels like dancing or a jazz improvisation.”

Though it took leaving home for the artist to find his place in a wider world, Aguilera’s home country remains an anchor point within his work. References to his memories of Cuba have been exhibited domestically and abroad and are included in the permanent collections of the National Museum of Fine Arts in Havana, the Museum of Contemporary Art in Monterrey, Mexico, and Hartsfield-Jackson Atlanta International Airport.

A graduate of the Higher Institute of Art in Havana and the School of Art in Holguin, his hometown, Aguilera was awarded a fellowship at the Massachusetts College of Art and Design in Boston in 1989. Two years later, he says “my journey out of Cuba began when I took a step back, reexamined all I’d been taught [within the context of a repressive communist regime] and started thinking for myself.”

“Everyone is going to Cuba for the robust art scene now, but Alejandro was kicked out 25 years ago because his art was considered subversive and a threat to the status quo,” observes Marianne Lambert, who curated SERIOUSLY FUNNY: Political Cartoons and Illustrations by Alejandro Aguilera for the Swan Coach House Gallery and the Forward Arts Foundation, through April 8. The response to Aguilera’s political satire has been enthusiastic, says Lambert, but “the sheer artistry of his expression have also gained the attention and admiration of gallery-goers.”

Comprised of 83 works on paper, SERIOUSLY FUNNY includes political cartoons, illustrations and caricatures rendered in ink, watercolor, collage, cut-outs, torn paper, ballpoint ink and Cray-Pas pastel works. Aguilera characterizes his preferred materials as “humble,” but the imprints they leave are sophisticated. Filtered through a lens of humor, his tongue-in-cheek portrayals have the power to inspire chuckles or tears. 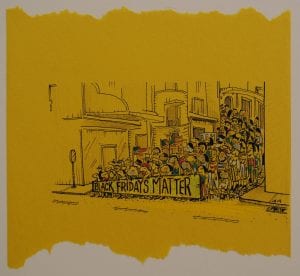 Narcissus, features a hand clasping a cell phone, snapping a selfie, in spite of the fact that the user’s body is completed engulfed in a roiling sea. Rampant consumerism is lampooned in Black Fridays Matter, which features hoards of post-Thanksgiving Day shoppers penned in by a banner that evokes #BlackLivesMatter protests. Animals are anthropomorphized, though they demonstrate far more compassion than human beings from Aguilera’s perspective, as they bear witness to a same-sex marriage ceremony in None of Our Family Wanted to Come, Just the Animals. And a simple line drawing of a man, whose body is indiscernible from that of the park bench up which he is seated, mirrors the plight of undocumented immigrants — who are simultaneously present and unaccounted for.

Gerardo Reyes, director of Ger-Art Gallery, a modern and contemporary art gallery on Atlanta’s Westside, first saw Aguilera’s work 15 years ago in Miami, and describes his cartoons as poetic. “The grace of them,” explains Reyes, “is that they do not shock, but instead invite consideration, intellectual engagement and analysis.”

A sub-series of modern abstractions of African masks, also on exhibit at SERIOUSLY FUNNY, were created after a patron gifted Aguilera with a special paper from India. “It was so thick and porous,” the artists recalls, “that I had to keep repainting the surface because watercolors were immediately absorbed on contact.” Aguilera likens the process to developing film and says he was, “fascinated by the process of waiting for the image to reveal itself.” 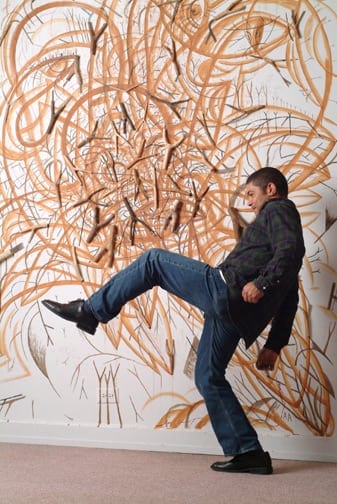 The act of waiting is something he hopes viewers might be willing to consider when contemplating his illustrations. “I don’t want to influence their thinking by explaining the work or its intention,” he says. “People love easy explanations. They want to feel safe in their interpretation … to be able to match the image with what they are supposed to feel. But such facile resolution defeats the ultimate function of any work of art — which invites us to think independently and open our minds.”

In this regard, according to Lambert, Aguilera is not alone. “Most artists don’t like talking about their work, but they are happy to answer questions, so I’ve scheduled a conversation between Alejandro and Michael Rooks [the Wieland Family Curator of Modern and Contemporary Art at the High Museum] around SERIOUSLY FUNNY. The talk, and subsequent Q&A session, will take place on March 8 at 7 p.m at the Swan Coach House Gallery.

Given his political exile and unflinching focus on sociopolitical upheaval and injustices worldwide, one might expect Aguilera to be a cynic. To the contrary, he is generous, centered and optimistic. He draws while watching the evening news, he says, as a means of coping with the frustration of what plays out on the screen and claims the exercise of synthesizing what he sees is like artistic therapy.

“These are my responses, my opinions on what I’m seeing. They are a reflection of things that move, inspire and ignite my imagination.” And like the ever-present music he favors, those responses are always sincere and never ironic.