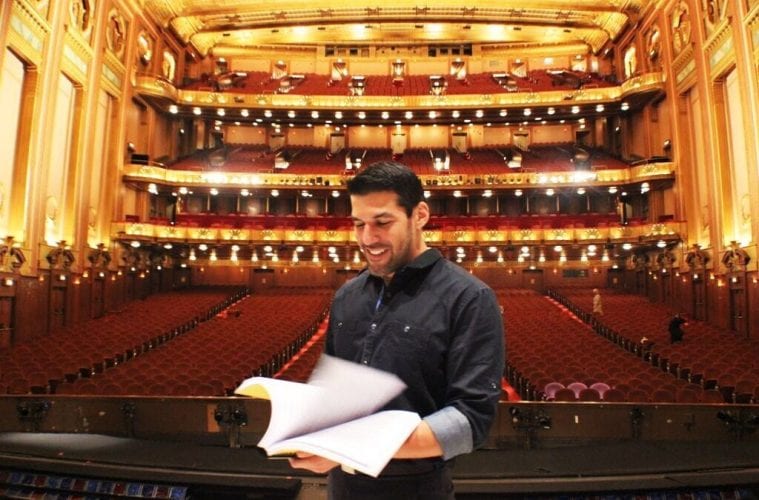 Lopez uniquely blends his classical training with the sounds of his youth in Peru.

Five hundred years ago, the conquistadors ventured into the Andes Mountains. They brought horses, firearms, Bibles and African slaves. They would savage and dismantle the Inca Empire, and force Africans and indigenous people into an uneasy and inequitable society. But it was a society nonetheless; one in which race, culture, music and art would blend.

Today, Afro-Peruvian music is part of Peru’s national identity. Its pioneers, one-time slaves, weren’t allowed to own musical instruments. Instead, they became highly skilled at using their voices, their bodies and turning found-objects into percussion instruments — a donkey’s jawbone became a standard instrument.

Composer Jimmy Lopez, born in 1978, remembers listening to the Top 40 on the radio as a youth. Then an introduction to J.S. Bach changed his life. He got serious about classical music, attended the National Conservatory of Music in Lima, and took himself to the Sibelius Academy in Helsinki, Finland, at the age of 21.

Lopez learned to speak Finnish and became an active member of the musical life in Helsinki. He became so entrenched that he began to struggle with his own identity as a composer. A case of homesickness sent him looking back to his Peruvian roots, and that’s when he began to incorporate and make use of all of his musical influences.

“Of course, all through my life, I had been listening to Peruvian music,” he says. “I had been hearing it, let’s say, but I wasn’t listening to it as attentively as I should have.” That changed in Finland. He started to introduce Afro-Peruvian elements into his own composing textures. It was like a musical homecoming.

Today, Lopez lives in California and is a citizen of the world. Afro-Peruvian idioms are just one part of his broad palette, coming to the fore most recently in his opera Bel Canto, which was commissioned by Lyric Opera of Chicago and premiered in December. Lopez brings his piece Perú Negro — and the donkey jawbone — to Atlanta for performances with the Atlanta Symphony Orchestra on Thursday and Saturday under guest conductor Miguel Harth-Bedoya.

ArtsATL: How would you describe Afro-Peruvian music?

Jimmy Lopez: Afro-Peruvian music is the result of centuries of a tradition that is mostly a mixture of Spanish and African influences that converged, rather violently at first, in the 16th century. But what you have there mostly are songs, songs of the slaves. They sound joyful, but they can be very melancholic. Sometimes they are talking about the abuses they suffered in the fields; they would gather together after working in the fields and just dance and sing and play.

ArtsATL: Apart from the use of instruments associated with Peruvian folk music, can you describe moments in Perú Negro that strike you as sounding particularly Peruvian?

Lopez: The work makes reference to five traditional Afro-Peruvian folk songs. The introductory section, “Pregón I,” captures the spirit of the old street sellers, who used to walk the streets of Lima announcing their goods, creating miniature songs in the process. These songs became extremely popular among the people of the city, and some of them have survived until this day. In a musical context, they usually appear in the form of question and answer.

ArtsATL: Have you identified elements of Afro-Peruvian music that can be traced specifically back to Africa?

Lopez: The music of the first African immigrants hasn’t been preserved by any written means, but it has been passed down orally from generation to generation. What we do have are accounts of contemporary scholars describing — and sometimes even drawing — African slaves gathering with their instruments to sing and dance. At the very beginning, all that slaves used were three things: their voice, a cajón (literally a wooden box) and the jawbone of a donkey. As decades and centuries went on, they started to add other instruments, including the guitar, which was brought by the Spanish from Europe to Latin America. A peculiar feature of African music, especially of sub-Saharan cultures, is “call and response.”

ArtsATL: What kind of sound do you get from a donkey jawbone?

Lopez: It makes a rattling sound when you hit it with your hand. The teeth are loose. There is an equivalent in the symphonic repertoire called the vibraslap that imitates that sound, but the original is the jawbone.

Lopez: Miguel and I have collaborated closely for a number of years, so instead of simply dedicating the piece to him, I decided to imprint it with his initials right from the beginning. The first motive, played by the horn, establishes the notes E, B, Bb and G, which correspond to Miguel (Mi = E), Harth (H = B natural in German-speaking countries), Bedoya (B = B flat, also in German), and Gonzáles (Gonzáles is a family name). These four notes rule the intervallic and harmonic structure of the entire piece.