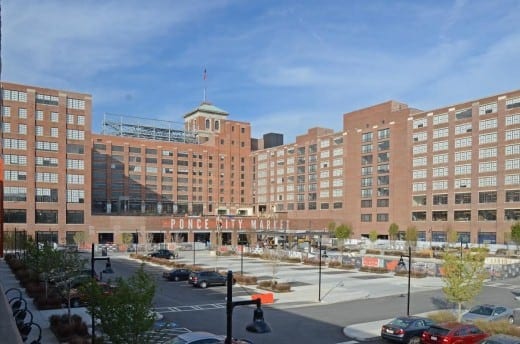 Atlanta has been a boom town for a very long time. Though slowed by the worst economic downturn since the Great Depression, it shows every sign that it is now accelerating. Returning job growth and new construction everywhere in town herald a return to the status quo.

And although Atlanta seems to be back to its usual standing as a generator of change and growth, the most important question remains: what kind of city are we making, and what kind of place, albeit always changing, will Atlanta eventually become?

Even in a neighborhood and a city where “once in a generation” catalysts seem almost to happen every few months, Ponce City Market — the largest and most significant project in town, or indeed in the region — stands to be an agent of significant change.

As the epicenter of seismic energies, PCM, a mix of office, retail and dining, is at the leading edge of several significant trends. First and foremost is the often-cited desire of the millennial generation to live in walkable, energetic center cities.

Growth since the early 1980s in Atlanta has mostly meant suburban sprawl. This time, so far, things are quite different: growth and development are centered in the urban core, and most suburban developments are aligned around MARTA, Atlanta’s rapid transit system, or clustered around existing small-town centers.

More than 10,000 housing units are either under construction or planned for the city proper. By most reports those that are finished are filling quickly.

PCM has been one of the greatest beneficiaries of this millennial energy. Months before the project’s official opening in May 2015, its office spaces are 80 percent leased. More importantly, many of the firms locating here are the high-tech companies searching for the kind of talent that the city now draws.

Athena Health, one of PCM’s first and largest tenants, relocated from suburban Alpharetta, citing an intown location as vital to finding the best and brightest employees. The company’s new open-plan, dynamic space takes advantage of PCM’s high-ceilinged industrial roots, an environment that would have been impossible at its former home in a suburban office park.

Search for the Authentic

The second significant trend driving the new boom is the desire for a kind of urban authenticity — sometimes roughly described as a desire for a physical manifestation of a genius loci, or genuine culture. This search for local food, urban culture and the latest entertainment options defines big city life today.

New urban amenities based on a city’s historical or cultural DNA are the essential ingredients to this “authentic” place-making. Like the Atlanta BeltLine‘s origin in our history as a railroad hub, PCM’s original use as the landmark Southeastern distribution center for the all-American and venerable Sears, Roebuck and Company give the project roots. The developers savvily reinforce those connections with such design elements as the blown-up entries from old Sears catalogs papering apartment lobbies.

This notion of the city and specifically Atlanta as more than a placeless “every city” is significant. The cultural ground of the historical city center is gradually replacing the free and open placelessness of the suburbs. This is a major and fundamental shift in the way the Atlanta region perceives itself and reinforces a paradigm shift in development patterns. PCM’s emphasis on local and significant one-of-a-kind restaurants and shops speaks to this notion.

Sustainable in Carland
Atlanta has long been seen as the definer of sprawl, and last winter’s apocalyptic snow-caused gridlock confirmed its utter dependence on the automobile. The desire for transit options in the region is palpable and gets more urgent with every rush hour bout with gridlock. Indeed, as the city’s density increases, transit options will become more than optional.

This desire is driving growth intown, where the development of the BeltLine, bike lanes and the Atlanta streetcar are gradually improving walkability and increasing connectivity.

PCM exemplifies the rise of this countervailing ethos with a design that permits direct access for bikers and pedestrians from the BeltLine and its private shuttle bus to and from the North Avenue MARTA station.

The Future Is Unwritten

All of these trends point to Atlanta becoming a new kind of place: a city conscious of its past and its culture and looking to a future of more compact lifestyles. New architectural exemplars will follow this intown movement. Recent, more contemporary and higher-quality urban projects are a positive sign, though the continuing appearance of worse-than-mediocre warmed-over suburbanism in projects by some developers is disheartening.

Any transition from sprawl cannot happen quickly given the amount of suburban development already in place, but new energies and new dynamics should fundamentally change the trajectory of the future city. One hopes that the hybrid urbanism of Atlanta will survive. The city’s pattern of tightly drawn, leafy, single-family neighborhoods sitting directly next to denser apartment and office construction with neighborhood centers reinforcing local amenities is unique among America’s largest cities.

The choice is fundamental and stark. Do we want a dynamic, green, sustainable, livable city, or a pollution-racked nonplace in a constant state of gridlock? The next few years will be crucial for Atlanta and what it will become.

Look for an architectural review of Ponce City Market project in 2015.