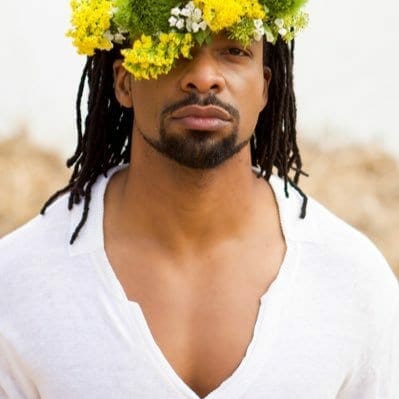 Jericho Brown's The Tradition came out April 2. It follows the previous poetry collections, Please from 2008 and The New Testament from 2014. (Image courtesy of the poet)

During a brief reprieve from a nationwide book tour, Atlanta poet Jericho Brown spoke to ARTS ATL about The Tradition (Copper Canyon Press, 110 pages), his recently published collection of poems.

Brown, 43, has been on and off airplanes since April 30, promoting the April 2 release on a tour that has taken him from Washington, D.C., to Las Vegas while continuing his work as an associate professor at Emory University, where he directs the Creative Writing Program. 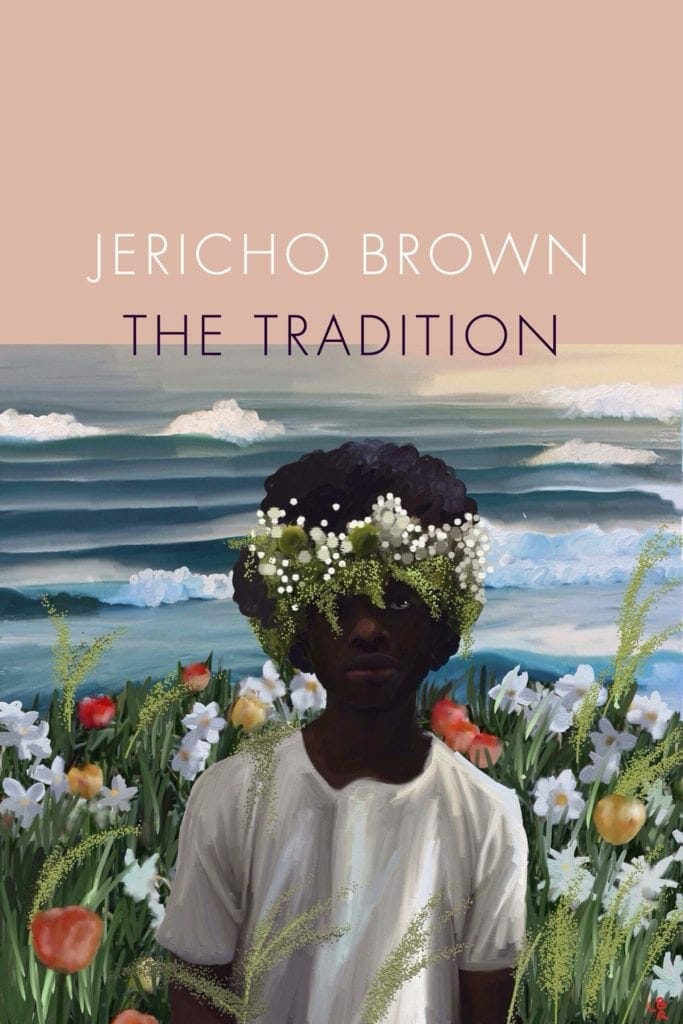 The Tradition, Brown’s third book of poetry, joins Please (2008) and The New Testament (2014) to form an exceptional trilogy of verse. He has many impressive credits beyond those titles. Brown won the 2009 Whiting Writers Award and has received fellowships from the Guggenheim Foundation, the Radcliffe Institute for Advanced Study at Harvard and the National Endowment for the Arts.

The Tradition taps into the tensions and terrors of daily life as expressed through the vulnerable, exposed body. There’s a tangibility to this collection that presents the marks we make against each other as marks against the Earth. This intimate conversation took place in the poet’s home, where contributor TK Smith asked about the ongoing tour, the new book and the responsibilities of being a midcareer poet.

ARTS ATL: How are you enjoying the book tour experience?

Jericho Brown: It’s great because you get to meet all these people who love poetry. There’s always somebody in the audience who’s at their first poetry reading, so you know you’re being responsible for introducing people to the art. You become an occasion for which people can come together, and that’s really wonderful. 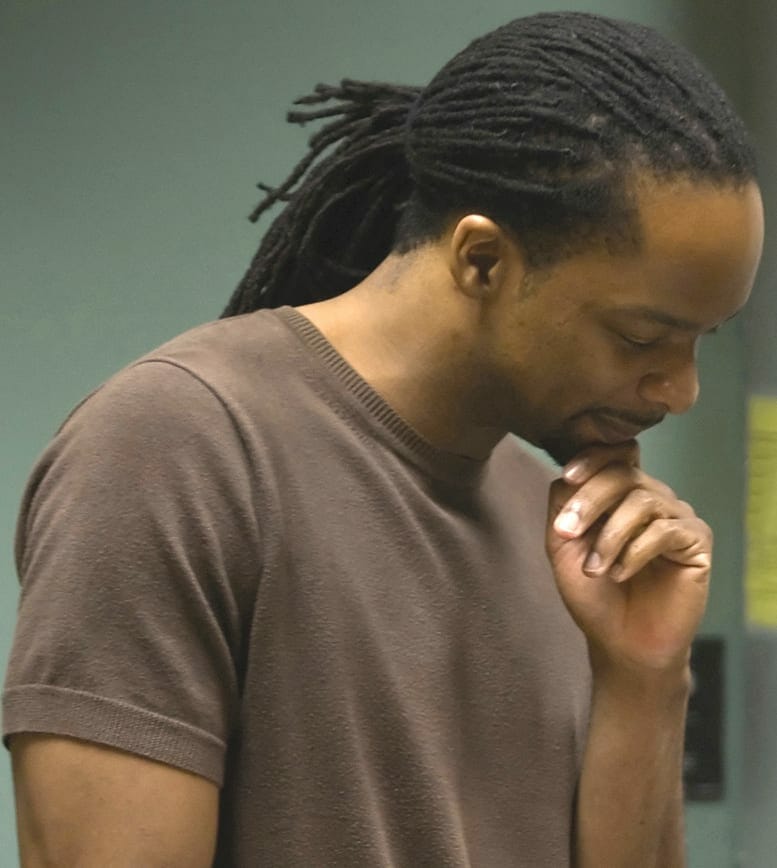 “I look at the language to see what it tells me,” says Atlanta-based poet and Emory professor Jericho Brown. “I don’t tell the language what I want to say.” (Photo by Mike Doyle)

ARTS ATL: How exhausting is touring?

Brown: I like the doing of it; I just don’t like the getting there — the travel, the packing, the hotel rooms. Even though I’m exhausted, there is some satisfaction from putting my body in the fire, just having the stamina to get it done. I have the responsibility to stand behind the book. I had a very special and intimate experience writing this book, and I want to reward that. In order to give back, I need to make sure that I’m doing what I’m supposed to do and giving it a chance in the world.

People don’t have to like my work. People don’t have to need my work. I think the important thing is that they know that the work exists, that it’s considered. As an ambassador of poetry, that’s what my job is. I’m supposed to be reminding people of the work that poetry does, bringing poets closer together and putting us in positions where we can help encourage one another. Artists are always reminding people and reminding one another of the value of art, artistry and the artists themselves.

ARTS ATL: Did you set out to write a third book?

Brown: Intention is difficult to talk about because I’m a poet. I intend to write because I’m writing all the time every day. Everything that comes to me is going inside the “poet-mind machine” and is going to come out somewhere in a poem. When I’m writing poems that accumulate over some time, I have to forget that they’re going to be in a book because I’m concentrating on it poem by poem. I like to believe that when Whitney Houston would sing “I Wanna Dance With Somebody,” she couldn’t be thinking about “I Have Nothing.” She’s going to have to sing both in a show, but in the moment of singing “I Wanna Dance With Somebody,” she’s singing “I Wanna Dance With Somebody.” She’s doing that as best as she can. For me, that happens at levels. There’s a level at which, once I have a bunch of poems, I know I’m working on a book, and all I can do is work on the book. 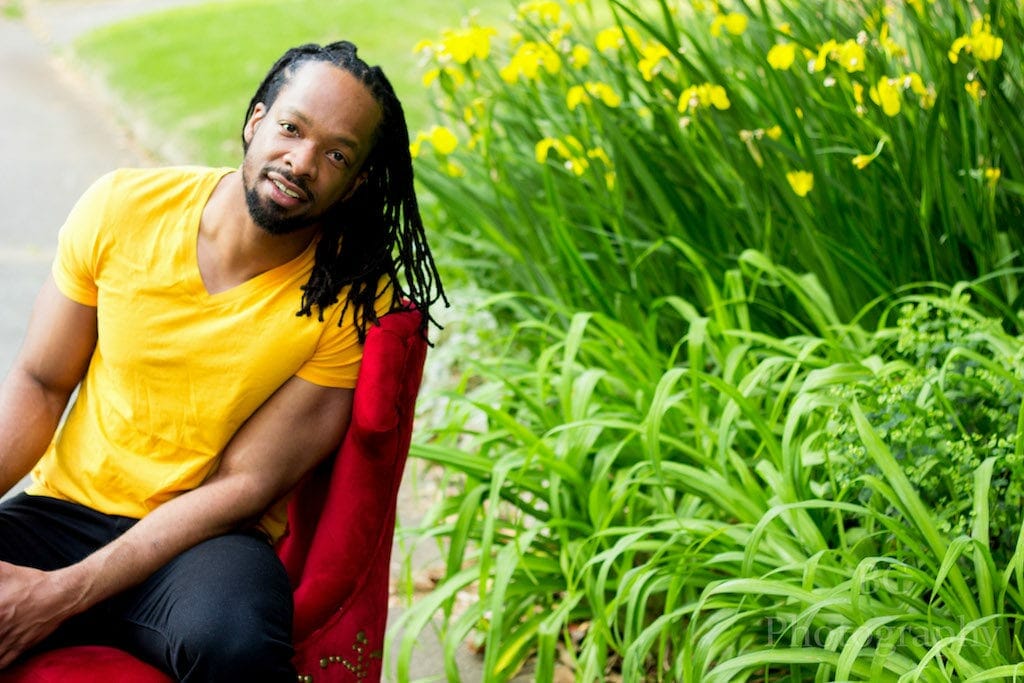 “People don’t have to like my work,” Jericho Brown says. “I think the important thing is that they know that the work exists. As an ambassador of poetry, that’s what my job is.” (Photo courtesy of the poet)

ARTS ATL: What are the themes in The Tradition?

Brown: I realized there were three conversations. What does a black life look like in a family or community of black people? What is our interaction with one another given the world around us in which we know we are being hunted? How do we interact with each other when we know that there are evils perpetrated against us? I wanted to answer that.

The second was, how do you interact with the perpetrators of that evil? The third was how one experiences love and the loss of love. How one experiences joy and the joy of love, given all those things that happened in the first two sections.

ARTS ATL: Do you write for a particular audience?

I don’t have the intention of who the poems are going to reach because there’s no way to quantify it. I’ll never get to know, and I shouldn’t. The root of it has to be my concern with language. If I’m concerned with language in a real way, then my concerns with other people, with the world, with the environment, with black folk — that’s going to come out. It will come out in a way of discovery because what I get at is my subconscious. As opposed to sitting down and knowing everything that I have to say before I write the poem, I want to make discoveries. I want to do an investigation through language. That means I look at the language to see what it tells me. I don’t tell the language what I want to say.

ARTS ATL: Have you found a limit to language?

Brown: I think that’s how you always feel as a poet. Even when you have that moment where you feel like you got it, a poem is just right, you put that colon in the right place, you’re done. Very soon thereafter, you read it and you realize that’s not it exactly. Poems can only approximate, which is perfect — they should only approximate. That’s why when you read a poem, or I read a poem, we see different things. One of the ways in which you know you have a poem is that everyone who sees it has a different reading of it, and that reading is still based on the text of the poem. I’m trying to write poems that make you stay inside the poem, and yet the entire time that you’re inside the poem, you’re also asking it questions. You’re asking it questions because it’s asking you questions and you’re interacting. If you have enough interactions with the poem, you will eventually began to have changes of mind, changes in ways of being.

ARTS ATL: What’s it like to publish a third book?

Brown: Having a third book makes me feel like a midcareer poet, like a grown-up. I feel like I’m in a position now where there are poets that look up to me and poets I look up to. A poem changes people’s definitions of poetry. The more you do it, the more you’re in the altering conversation. There’s something much more mature and adult than when my first two books came out. In my first two books, I’m trying to figure out what the Jericho poem is, and the third book figures it all the way out.