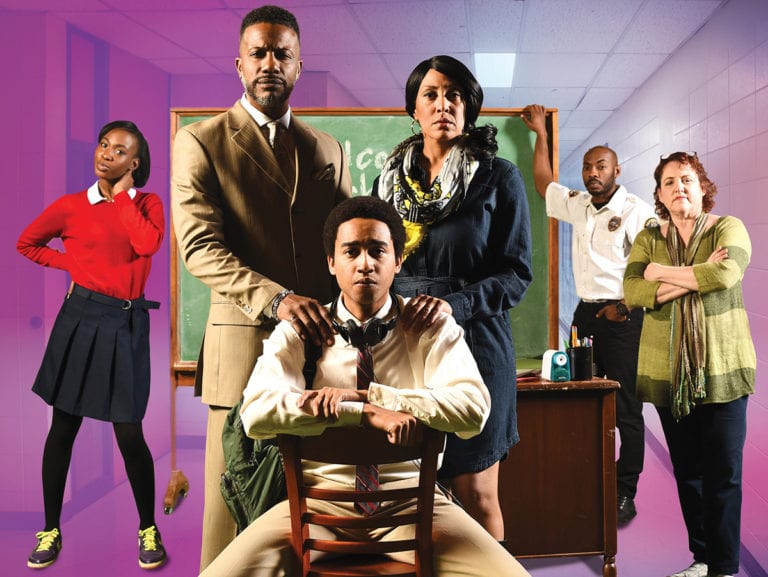 The cast of Pipleline at Horizon Theatre Company

“If you’re an animal, we built the jungle.”

Pipeline, by Dominique Morisseau, examines what happens when racial tensions climb too high and explosive conflict ensues — both on and off school grounds. In this world, showing through April 21 at Horizon Theatre, school is a jungle, students are animals and teachers are caught in a dangerous environment.

The actual setting is an inner-city public school wherein fights break out, metal detectors are used at the doors, cell phones are contraband and security makes just above minimum wage. Nya is a teacher here, but her son Omari is not a student. With the help of his attorney father’s financial support, Omari attends private school. Described by her ex-husband as “hood,” the school in which Nya spends her time is worlds different than the educational environment they want their son to experience. But when Omari pushes his teacher against a wall and is threatened with expulsion, Nya realizes that her son’s anger cannot be solved “from the outside in.”

Provocation from the private school teacher leads to Omari’s breaking point, and the consequences follow him through his attempt to run away. Omari feels as though the private school sees him as an “animal,” who after a fit of rage will be “unleashed.” He claims the teachers look right at him but also through him. His loved ones know that Omari’s violent behavior can too easily be associated with his blackness.

Horizon Theatre welcomes the audience to reflect on the “legacy of resentment and rage” that seems to follow young black men through their time in the education system. This play speaks to the generationally ingrained language tactics that manipulate the image of black men in society. This language is nothing more than negative preconceived notions that are projected onto an individual.

Directors Tinashe Kajese-Bolden and Keith Arthur Bolden remark in their program notes that the concept of “how the American education system could be rigged to fulfill some social prophecy of school-to-prison pipeline” is successfully and systematically oppressing young men like Omari. Listening to the story of the individual, and seeing it performed so beautifully on stage, is a way to begin breaking down the system of oppression.

Stephen Ruffin, who plays Omari, captures what it must be like to be a young black man seeking peace in a world that provokes conflict. His mother, Nya (Wendy Fox-Williams), fights the same battle of wanting to protect her son from getting entangled in the school-to-prison pipeline. Williams and Ruffin deliver a moving performance that emphasizes the tensions, awkwardness and pure intentions between mother and child.

The connection between the cast members showcases their genuine connections to the story and characters. Omari’s private school girlfriend, played by Asia Howard, seems to understand who Omari is and wants him to be in a space where he can be himself. She plays across from Omari earlier in the play and across Nya later on. The character pairings in these scenes show how an answer can dance around a question when neither participant is willing to effectively communicate. Howard’s performance of being young, tenacious and in love softens the world of violence and anger that has been stirred up by Omari’s actions.

The authenticity of this performance is what makes it worth seeing. From the set to the actors, the entire production reads of the personal connections to the story that inspired the artistic choices. In this internet age, society’s perception of black men can be affected by the smallest action. Horizon Theatre encourages their audience that if they are affected by what they see, to share the experience so as to open a dialogue about what we could be doing better in arenas like the public school system and all throughout society.