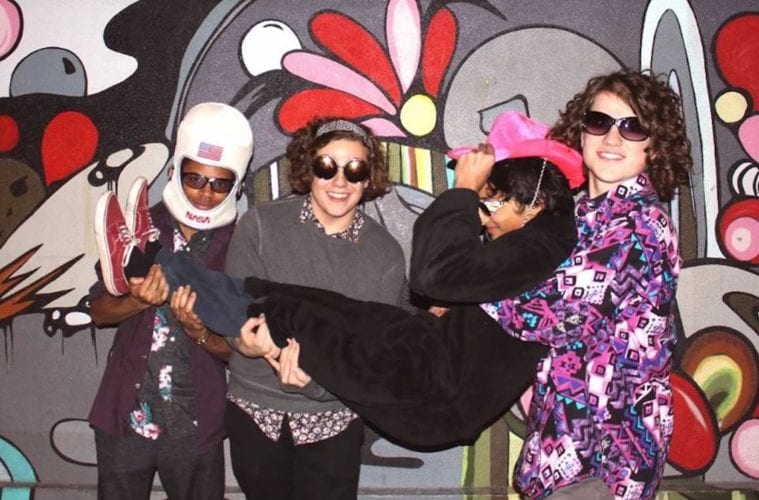 Since 2015, Pinkest has dazzled audiences with fiery live performances and the ability to transcend this world, one song at a time. The power-punk deviants bring their sound to a fine point with today’s release of “Here Leaves Today” and “The Heartbeat of America,” which dive headfirst into progressive rock with jazz notions. The tracks are available today, and the band plays 529 on February 15.

Singer, guitarist and pianist Ethan Smith, bassist Sarfaraz Syed, drummer Gabe Patterson and guitarist Jason Blackett first made a splash with 2017’s To The Land of the Electric Angel. Now, the group is treading deeper waters with a more mature and realized tone, with the release of two songs that precede their anticipated sophomore album coming later this year.

“These songs came out of the first batch of songs we wrote after releasing our last album,” Smith says. “We had the desire to add other instrumentation than the usual Pinkest repertoire, and I wanted to change my focus from guitar to keyboard so we could present our songs in a fuller way.”

On “Here Leaves Today,” Smith’s talent of stringing together whimsical narratives is at its most manic. Beyond piecing together a tale of pictures that come to life and Smith bursting into flames, the track is a piano-led stream-of-consciousness romp with nightmarish undertones. “The Heartbeat of America” takes a more nostalgic sound, elevating Americana tones to the upper rings of the cosmos, bringing to mind some sort of intergalactic cabaret in the process.

Regardless of which turn the band takes, expect the same full-flavored mastery that makes Pinkest one to keep an eye on.