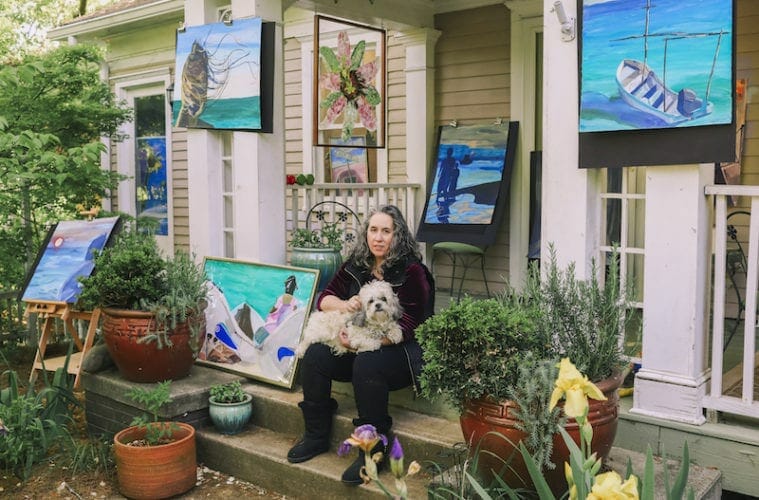 Atlanta artist Kelly Karim in her Picket Fence Gallery with her paintings and canine gallery assistant. (Photos by Gretchen Connell)

Picket Fence Gallery created “to give something unexpected to the community”

A month ago, painter Kelly Karim was preparing for a one-woman show at Decatur’s Sycamore Place Gallery. When Covid-19 and quarantine quashed those plans, she decided to share her art anyway and has turned the front porch of her Lake Claire home into what she calls the Picket Fence Gallery. 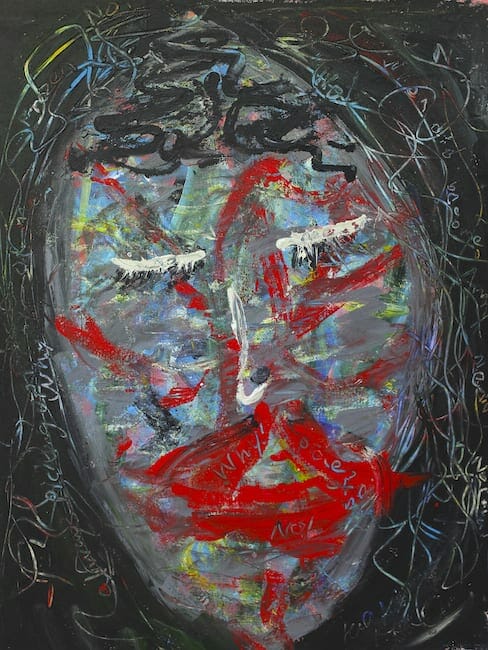 “Where Is My New Normal,” a self-portrait.

The 10 or so paintings she’s displayed the past few weeks are delighting passing drivers and neighbors out for walks, sometimes eliciting stories or exchanges from a safe social distance. One neighbor scheduled time to bring an easel, sit out on the lawn and paint while Karim painted from the porch. When Atlanta’s robust pollen count or capricious weather prevent display outside, Karim moves inside to work at the windows.

“People still need inspiration, to experience art and ideas that are different,” she says. “I created my Picket Fence Gallery to give back to the community with something unexpected.”

Her new series, titled Back in Time to Chixculub, was built from scenes she’s seen during regular trips the past 15 years to Chicxulub Pueblo, a town on Mexico’s Yucatan Peninsula. Her family — husband James and sons Jacob, 19, and Josh, 17 — own a small home there.

The town (population 4,100) is best known for its location in the middle of the Chicxulub crater, the impact site of the asteroid or comet that wiped out dinosaurs about 66 million years ago. The strong community there inspires her, Karim says, adding, “This series is about resilience. Both my own and the subjects in my paintings.”

Resilience is a theme with which Karim has become familiar. In 2016, she was attacked and raped during a trip to Houston. After the assault, she began painting prolifically, finishing 60 pieces within a month, often just throwing acrylics on the canvas to see what took shape. 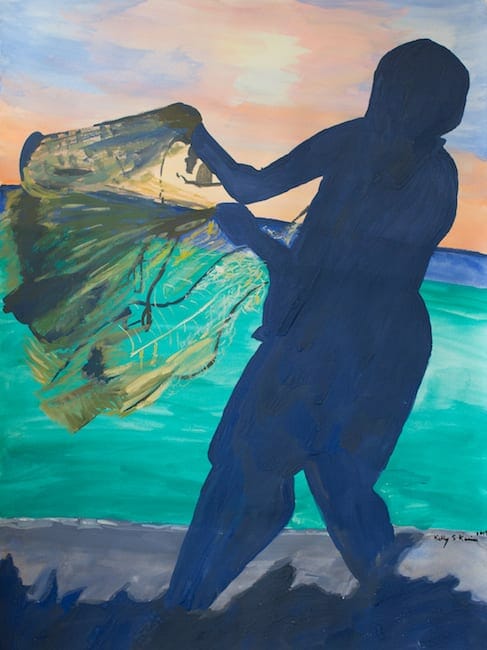 From January: “The Fisherman.”

“When I started to paint, the pain went away,” she says. “I gathered strength with every painting.” Like shapes and figures emerging from random colors on a canvas, she began to emerge, too. Sometimes it was so hard to talk that she took paintings to counseling and and discussed them. “It was almost like the paintings could speak for me,” she says. (See more of her work HERE.)

Now Karim offers her work to anyone wandering by as an authentic statement about hope and survival. She tries to paint in the Picket Fence Gallery once a week from 4 to 6 p.m., often on Fridays if it doesn’t rain. This week, look for her from 4 to 6 p.m. Tuesday (April 21).

When she’s not on the porch, she displays her artwork from her windows and rotates the paintings so passers-by can see something new every day. She doesn’t want to put anyone at risk, so she suggests driving by to see the paintings, and she asks anyone on foot to stay outside the fence and be aware of keeping the proper distance from other onlookers.

“When the series started to emerge, I had such a great pleasure as a friend and a teacher,” says Sylvia Cross of Sycamore Place Gallery, who’s known Karim for some 30 years. Her friend, she says, truly seems to be coming into her own as an artist.

The colors and subject matter of Karim’s paintings, done with water-based paint called gouache, remind Cross of work by Giorgio de Chirico or Frida Kahlo. “It was like she found her voice.”

As Karim puts it: “The paintings with the most vibrant sunsets were always after a fierce storm.”