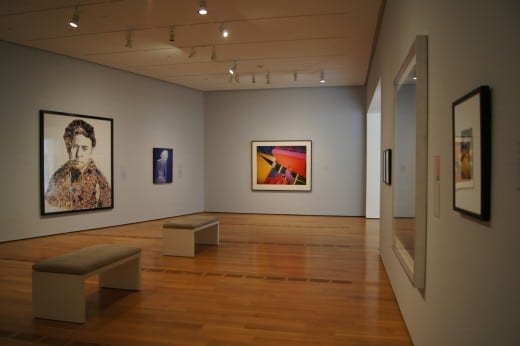 View of the new Lucinda Weil Bunnen Gallery for Photography at the HIgh Museum.

Though the High Museum began acquiring photography shortly after opening in 1962, 10 years passed before an outpouring of community interest encouraged its late director, Gudmund Vigtel, to grow the collection in a significant way.

Some 50 years later, High photography curator Brett Abbott describes the museum’s photography program as the “largest and fastest-growing division at the museum” and “the most robust in the Southeast.”

Indeed, 2014 has been a very big year for photography at the High, not only because of the endowment of the Donald and Marilyn Keough Family Curator of Photography chair and the inauguration of the Lucinda Weil Bunnen Gallery for Photography — the first at the High dedicated solely to photography — but also for three major photography exhibitions running concurrently.

The Invented Image: Photographs from the Collection, the Bunnen Gallery’s debut installation, is as much an exploration of works that push the boundaries of photography as it is a tribute to the gallery’s namesake, a major patron and photographer whose work ranges from highly experimental to quiet meditations on the natural world.

Among works currently on view at the Bunnen Gallery are Vik Muniz’s Picture of Junk, Hiroshi Sugimoto’s Lightning Fields and Christopher Bucklow’s Guest 5:39 p.m. 27-6-96. The selected images signal Abbott’s commitment to showcasing a cohesive but eclectic collection, while bolstering Bunnen’s conviction that photographs “don’t have to be just documents,” as she puts it. “They can be something inspirational . . . more than just what the eye sees, but what the brain can conjure up.”

Wynn Bullock: Revelations, on view through January 11, 2015, is one of the most comprehensive assessments of Bullock’s work in 40 years. Abbott curated the show and wrote the catalog after years of exhaustive research. He hopes the retrospective, which explores the mysteries that drove Bullock intellectually and aesthetically, will restore Bullock’s reputation as one of the triumvirate of major West Coast photographers including Ansel Adams and Edward Weston.

Two weeks after moving to Atlanta, Abbott met Barbara and Gene Bullock-Wilson — the daughter and son-in-law of Wynn Bullock — for lunch. The trio recognized a shared a vision for photography at the High and in Atlanta, remembers Abbott, “and we realized we could do something really special.”

As steward of nearly 6,000 photographs, Abbott’s goal is to collect in depth and monographically. “Rather than have one Wynn Bullock,” he explains, “I’d rather have 100.”

Owing to relationships with the Bullock family cultivated during his nine-year tenure as associate curator of photographs at the J. Paul Getty Museum in Los Angeles, Abbott is well on his way to accomplishing that goal. Of the 100 vintage prints on exhibit — including experimental works, black-and-white images, color light abstractions and his late metaphysical photographs — one-third have been promised to the High.

Gordon Parks: Segregation Story, on view through June 7, 2015, exhibits the color print project commissioned by Life magazine to document segregation in Alabama in the 1950s. Most of the images coming to Atlanta have never been seen before.

Abbott is proud that the High has acquired 12 prints from the 40-piece series on view, adding to its store of vintage civil rights photographs — the largest collection nationwide — one of Abbott’s three “pillars of strength.”

“The vast majority of our growth over the past three years,” says Abbott, who joined the staff in 2011, “has been through gifts of works of art.” The endowment has helped the High transition to a more active approach. “Rather than receiving,” he says, “we’re purchasing.”

At his back is a mix of grassroots support, the Friends of Photography Group, Lucinda Bunnen, Joe Massey and the Massey Charitable Trust, the Keough family, Paul Hagedorn and Robert Yellowlees.

Thanks to their contributions, Abbott has been able to sustain an important commission program called Picturing the South. Established in 1996, the program invites photographers to make pictures inspired in and about the South. One of the bigger success stories from the series is Richard Misrach’s 2000 project entitled Cancer Alley, which focused on the Mississippi River and the oil industry. The commission inspired his 10-year project, Petrochemical America, selections of which were exhibited at the High in 2012. The High owns the only complete set of large-format works to come out of the project.

Yellowlees, who founded Lumière gallery, believes the accessibility of the medium can serve the museum in other ways. “Art in museums and galleries is often off-putting [to uninitiated visitors],” he acknowledges.

“But photography is a more populist art form,” owing to a digital environment that encourages participation through selfies, social media and YouTube, “all of which,” concludes Yellowlees, “break down traditional resistance and encourage broader engagement.”

Photography can not only speak to a wide range of visitors but also, in the process, elevate the ordinary. “Part of the wonder of being in any art museum is the idea of experiencing something transcendent,” says Abbott. “I like the idea that someone who doesn’t necessarily think of photography as art might stumble into a gallery and be amazed at the creative potential of the medium.”